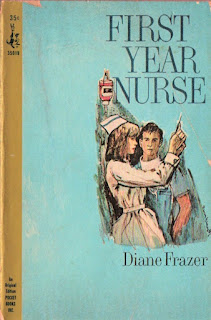 
“You’re leaving us, Dr. Troy?” Taffy closed her eyes and took a deep breath. “You let me know if there is an opening in your hospital, Doctor.”
Dr. Troy stared at her. It was the stare of a boy seeing all the toys he had wanted under the Christmas tree. There was a silence that seemed to last forever. “No need to check,” he said hoarsely. “I know there’s an opening.”
“Is there?” she said, and looked directly into his brown eyes. What happened next was completely her doing. It wasn’t possible that she had put her arms up to his shoulders and put her mouth on his. It wasn’t possible. But there she was in his arms, which had promptly wrapped themselves around her, as if he been waiting for her to do exactly that. And maybe he had been waiting, waiting a long time.

BEST QUOTES:
“The doctors, as usual, were running off at the mouth, spouting their learned phrases. Doctors never lowered their voices. They seemed to try to outdo each other in pedantry.”

“She knew that to find someone who would ask you to give up your career, you must first have a career.”

“No, I had no special plans. Nothing that couldn’t be arranged, anyway. Eddie Fisher wanted to take me to the New York Hilton for dinner, but I put him off. Some other time, I told him. He was terribly disappointed, but never let it be said I let a colleague down.”

“If I blush now I’ll kill myself, Taffy thought. I’ll go out and buy a gun.”

REVIEW:
Perhaps the best thing about First Year Nurse is that it features a cameo by Lily Sorenson Carlton, the starring RN in Nurse Lily and Mister X, a sparkling, witty nurse novel that Frazer/Fletcher wrote in 1961. Unfortunately, while this novel has some admirable qualities, it is not of the same caliber as Nurse Lily.

Here Lily is on the OB ward to deliver her first child, cared for by Nurse Elizabeth Powell, unfortunately nicknamed “Taffy,” apparently because of her hair, but I hope not. She is crushing on obstetrician Dr. Ben Troy, who is as shy as he is handsome; in an early elevator scene we peer into the thoughts of each to realize that they like each other, but each completely misreads the other’s sentences in the worst possible light so as to remain oblivious to the other’s interest. So for most of the book, they pass in the halls and exchange clipped words that continue the hurt feelings.

The book follows various patients and their obstetrical courses, some for better and some for worse. It trails Taffy on her dates with Ernie Browder, a PhD pharmacist who chafes for opportunity and the riches he feels that will bring; they have many bizarre conversations in which he urges her to chase after more lucrative opportunities with the suggestion that her successes will somehow benefit him, though it’s not clear why that might be the case, even if they were to marry. Unfortunately, his influence leads Taffy into the 20th floor office of a wealthy father-to-be one late evening, lured by the promise of a high-paying job in his firm. Well, that’s not actually what the man wants, and in a creepy scene in which he’s locked the office door, he tells Taffy, “I’m not in the habit of attacking young girls, but I’m also not in the habit of wasting my time. This office is virtually a prison and only I have the key. There’s nobody around at all.” Only the mention of Taffy’s relationship with his wife opens the door. It also opens her eyes to what she really wants in life, which had been eluding her up to that point. “Everyone wanted to be rich. Of course. But it shouldn’t eat you up inside,” she decides, realizing that her nursing career, which had previously seemed a bit dull, is “my natural element. This is where I belong. Why, it’s my life.”

Then, in a February blizzard during which only those staff members living within walking distance of the hospital are able to staff the place for three days, Taffy and Ben become friendly. Taffy offers to accompany a stressed mother into the OR during her C-section, and when it’s over, she passes out in the scrub room, and Ben staggers off with her in his arms to find her an empty hospital bed. “How much do you weigh, anyhow? It seemed like about two hundred pounds,” he gripes. The scene’s conclusion should come as no surprise to anyone who’s read a nurse novel before, or the back cover of this novel.

The book itself is somewhat modern in that I think it’s the first time in more than 400 VNRNs that I’ve encountered the word “rape”; when one of Taffy’s roommates staggers in completely distraught, and Taffy asks her, “Nothing really bad happened to you, did it?” the roommate replies, “You mean nobody raped me, did they? Isn’t that what you mean?” (Nobody did.) In addition, to demonstrate how shallow the pool of eligible men in New York is, Taffy recalls a former beau: “It took three dates to find out that he was a homosexual,” possibly another first mention for a VNRN. Working on the maternity ward, Taffy is a first-hand observer of the results of passion; labor, and babies, are “the price to be paid for pleasure, for love.” She thinks of one 19-year-old patient who hemorrhaged during the delivery of her baby: She “had danced at the St. Regis Hotel and fallen in love, made love, and then died from it.” It’s not all grim, though; the book has some of the razor-sharp humor we expect from Dorothy Fletcher, just not as much as we would like. In addition there’s not much plot to this book—certainly not enough interaction between the leads to warrant their apparent engagement in the final pages. You could certainly do worse than this book, but it’s sad to know that author Dorothy Fletcher could easily have done better.