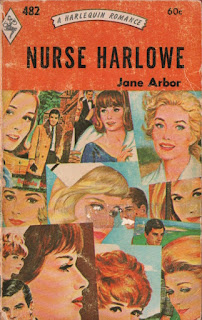 Gillian Harlowe, staff nurse at St. Ranulph’s Hospital, had told herself over and over again that it was sheer folly for her to fall in love with that distinguished surgeon, Adrian Pilgrim, whose interest in her was obviously confined to approval of her professional skill. Worse – he seemed almost to welcome the idea that she might marry his charming, reckless young cousin Colin, while he himself was busy squiring the sophisticated (and very determined) Elspeth. Yes, she knew she ought to put him out of her thoughts. But it isn’t always possible to persuade one’s heart to listen to reason.

REVIEW:
The cover illustration completely sums up this book: Plot devices you’ve seen before, assembled with little skill, and achieving a mediocre result. Those story lines we’ve met numerous times in the past:

1. The heroine, Gillian Harlowe, at 23 is fifteen years younger than the man of her dreams.
2.      Dr. Adrian Pilgrim “had never given any sign that he recognized anything but the trained dexterity of her hands,” but she Gillian falls in love with him anyway.
3.      Gillian had been in love with playboy Colin Fenmore four years ago, but he’d dumped her after a summer of fun—and now he’s turned up in her ward after a serious car accident that may leave him crippled for life.
4.      The only way Colin is going to pull him through his recovery is if Gillian pretends that she’s in love with him.
5.      Dr. Pilgrim believes Gillian is going to marry Colin.
6.      Gillian believes Dr. Pilgrim is going to marry sexy vixen Elspeth Paul.
7.      The Ward Sister, Clarice Hugh, is a bitter, mean shrew because she had lost her fiancé 20 years ago.
8.      Clarice is transformed into a warm, kind human being when her ex-fiancé returns for her.
9.      Dr. Pilgrim kisses Gillian at the Nurse’s Ball, but she thinks he means only to insult her by it.
10.   Despite a recent promotion to charge nurse that she says means a great deal to her, Gillian plans to throw over her career when she is married.

And that, essentially, is all there is to say about this book. The writing is perfectly tolerable, but the story a straight, wide highway through the desert: It’s clear where you’re going, and you’ve seen before what little there is along it. I think the most emotion I felt during this book was when the fiancé quotes Shakespeare’s Taming of the Shrew to her in the final pages: “‘Thy husband is thy lord, thy life, thy keeper; Thy head, thy sov’reign.’ Are you really content, my sweet, to have it so?” And she replies. “It’s all that my life could ask—” It wasn’t a pretty emotion, but it was one. If it’s not an emotion you would care to have yourself, you might want to consider giving Nurse Harlowe the slip.

Email ThisBlogThis!Share to TwitterShare to FacebookShare to Pinterest
Labels: car accident, paralysis, theme - keeping a secret, trope - pretending to be in love