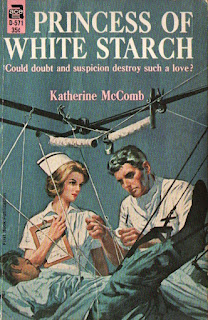 Nurse Flower Palmer was young, lovely, and in love. Jimmy Scott, her fiancé, was the Prince Charming of any girl’s dream—handsome, fabulously wealthy, and very much in love with her. But there were others who were determined to do something about it. Two women in the Scott mansion hated the young nurse. And there also was the dark-haired, moody, unpredictable young doctor at the hospital, whose anger and contempt and sudden passion had shaken and frightened her. When tragedy struck, all of them pointed accusing fingers at Flower.

BEST QUOTES:
“You don’t think much of women anyway, though I suppose your mother was one.”

“Who did he think he was, anyway, one of the Kennedy boys?”

“If you weren’t my best friend I’d inject air into your veins, or something.”

“All laymen think doctors and nurses have it easy, and go into shock when they get a bill for saving their lives.”

“Are you a native angel?”

REVIEW:
How awkward to have a literal flower child for a heroine. Nurse Flower Palmer, who has been at LA County Hospital since she graduated from nursing school month ago, is “no bigger than a bar of soap after a big wash,” 5 foot 2 and 110 pounds, and “just because she was small and looked sixteen instead of twenty-three nobody ever seemed to take her seriously.” Take, for starters, Dr. Lester Dean. “I was just wondering why they sent a grammar-school babysitter to take Miss Reynold’s place,” he tells her when she shows up to work the emergency department. But he is just a cynical old meanie who wishes the suicide attempt had been successful because the patient will “try it again the next time she starts feeling sorry for herself. And she’ll probably keep on until she succeeds.” He also tells a woman whose throat is slashed her husband, “It’s the inside scars that can never been healed.” Super helpful! Even better, before the shift is halfway through, he grabs her and kisses her, “hard, bruising, demanding.” She is outraged, so much so that when he asks her out to dinner she “almost said yes before she thought. Then she remembered his rudeness and shook her head.” That’ll show him! Of course, we know how this is going to go: “She had never met such an arrogant, pick-headed person, and just when she might have started liking him.” Which she will, after a lot of sparring.

This book, like many other VNRNs, includes a natural disaster, but here the twist is that it’s on page 25, not the penultimate chapter. During the earthquake she meets a man whose legs have been broken, but good news! His nephew, Jimmy Scott, is hunky and drives a robin’s egg blue sports car. She helps get Jimmy’s uncle home, which is an ocean-front mansion in Santa Monica, and then agrees to do some part-time nursing for the man around the edges of her regular daytime job. Of course, it takes Jimmy about ten minutes to propose, though she points out the only known each other two days and it might be a good idea to get to know each other first.

All of a sudden, Flower takes a sharp U-turn away from her usual sensible and smart attitude. “She thought again, as she had many times, about leaving the hospital.” After only a month on the job? “Of course there was one way out—she could marry Jimmy Scott.” Um, yes, that’s one way out, but aren’t there may be other, less permanent options? Two months pass in a few short pages, and she’s said yes to Jimmy and given notice at the hospital. Three years of training, and she quits in three months. “You belong to me,” Jimmy tells her, “and that’s all you need to belong to.” He gives her a huge diamond ring which she refuses to take off at work, though I expected this is a little problematic when managing a Code Brown.

The only person who isn’t happy for her is that stinker Dr. Dean. “You don’t honestly believe that Jimmy Scott will allow his wife to bathe, give enemas and carried bedpans for male patients, do you?” Which was the point, of course, so it’s not exactly the zinger he might have liked. And then he kisses her again, the cad. Six more weeks quickly pass, during which Flower moves into the family manse and wedding planning proceeds apace. Suddenly Mr. Scott has a stroke, and now the wedding is off, and Flower can keep nursing, right in the comfort of her fiancé’s own home. Conveniently, Mr. Scott’s doctor goes on vacation and turns the case over to Dr. Dean, who can come over and glare at Flower on a daily basis. Unfortunately, Mr. Scott has a few more strokes, and, one day when Flower is home alone with him, he sends her off to get lunch, and when she comes back, he’s at the bottom of the pool. Almost everyone seems to think Flower has given the old man a push—everyone except Dr. Dean, of course. How will she clear her name?

Well, that’s not really important. She does, of course, and gets a man, after a stupid little misunderstanding that we really didn’t need. Overall, this is book is somewhat mixed. Flower is delightfully spicy, and tough, to boot. One irritating visitor suggests he should have the procedure so he can have her for a nurse as well. “What do you think I could have cut out, Nurse?” Flower snaps, “Your ego,” and promptly tosses the joker out of her patient’s room. But she quits nursing at the drop of a hat, so it’s hard to have a lot of respect for her after that. (Yes, it seems she’s going back to it in the end, but still, how fickle can you be?) Some parts of the story, particularly the evil plot to frame Flower, seem quite thin—but then the description of Mr. Scott’s strokes, each one whittling away a little bit more of his vitality, seemed painfully real. There are things in this book that make it worth reading—quotations from the poet Shelley among them—but it won’t be the most delicious meal you’ve ever tasted. If it’s landed in your lap, I give you permission to have at it, but you needn’t go chasing it down.