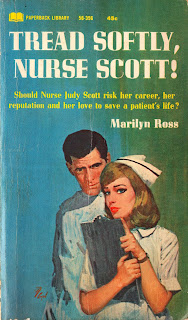 Nurse Judy Scott alone knows that Dr. Graham Holland, chief surgeon of the hospital where she works, has made a terrible mistake. Because of his error, a patient may die. Only one person believes Judy—Dr. John Randall, her fiancé. But for reasons of his own, Dr. Randall refuses to do anything. He even threatens to end their romance if Judy exposes Dr. Holland’s mistake. With her future and her patient’s life at stake, Judy faces her most crucial decision as a nurse—and as a woman.

BEST QUOTES:
“How do you measure husband material? By the yard? Do you take the quality and width into consideration along with the texture of the hair?”

REVIEW:
Nurse Judy Scott is the sort of heroine I can get behind. More than a little feisty, we are told that “she was just a jolly, good-natured young woman until some error caught her attention. Then her temper flamed to match her hair!” Right out of the gate, she’s telling a demanding, rude patient who has attempted to smuggle whiskey into the hospital—the bottle having been seized and stored in the nurses’ station—that “having it around too much has helped put you where you are now. We do not have time to bottle-nurse you,” and walking out. Amazingly, she never gets into trouble for her comments.

She works on the surgical floor but also gets pulled into occasional surgeries as scrub—because apparently the existing pool of scrub nurses is not as talented as Judy is—which means she is on hand to witness the slow deterioration of Dr. Graham Holland, 65-year-old hospital chief who is moving slowly in gallbladder surgeries, stumbling in the halls, and complaining that the x-rays are too fuzzy these days. She discusses the problem frequently with her boyfriend, Dr. Miles Small, who has proposed multiple times but in whom she is not deeply interested. But Judy doesn’t always have the courage of her convictions, and tells Miles, who shares her concern, “Perhaps, if you ignore it, the trouble will pass and he’ll be all right.”

But the mistakes keep piling up, and soon Judy learns that there are two cases of patients whose gallbadders Dr. Holland had removed who had serious complications and were referred to major Boston hospitals for corrective surgery. Then the nasty alcoholic woman is not recovering from her surgery, and in a trip back to the OR that Judy and Dr. Small are assisting in, it is learned that Dr. Holland tied off the wrong duct (the common bile duct rather than the cystic duct, in case you are wondering).  Dr. Holland walks out of the surgery before it is completed, flies to Boston, and returns a few days later wearing glasses. Could this be the answer?

Well, Dr. Small is not convinced, because when his own father lands in the hospital with pancreatic cancer and Dr. Holland is planning to operate, he transfers his father to the Brigham in Boston for the surgery. “We have agreed that Dr. Holland shouldn’t operate on your father,” Judy says to Dr. Small. “But what about the others, the average patients who are still coming to him and depending on his skill? If Graham Holland isn’t in a fit physical condition to operate on your father, he isn’t well enough to be trusted with anyone else.” Dr. Small is shocked at this suggestion and defers any confrontation with Dr. Holland, because “we owe him our loyalty, Judy.” Judy adroitly replies, “Don’t we owe some basic allegiance to our patients?” Dr. Small answers, “There’s no harm in allowing him to continue as he is,” though it’s been proven that Dr. Holland is in fact harming patients, but Judy agrees to give Dr. Holland more time. Then she catches another mistake that Dr. Holland has made on the eve of major surgery for a prominent lawyer. Does she turn in her beloved colleague or allow the patients to undergo unnecessary risk? It’s an interesting and not uncommon dilemma in hospitals—and one I have personally witnessed—when a leading surgeon is no longer at the top of their game, and the debate around this question makes the book more interesting—the problem being that the answer is obvious to the casual observer.

Another unusual aspect of this book is how it dissects Judy’s relationship with another surgeon, Dr. John Randall. He is a serious, somber man and brilliant surgeon who Dr. Holland brings only reluctantly onto the hospital staff. Some say Dr. Holland is deliberately sabotaging Dr. Randall’s career, though Dr. Holland says his intention is to keep Dr. Randall humble and from acquiring an arrogance that undercuts his skill. It’s not an unwarranted concern; Dr. Randall laments that Dr. Small gets the important patients while his clinic consists of “a sewerage worker, and insurance agent and an elderly retired schoolteacher,” but Judy answers, “It seems to me that patients are all people and as individuals, important, regardless of their social position.”

Judy finds herself caring more and more for Dr. Randall, but she is concerned that if she marries him, his seriousness will eventually undermine their relationship. “There is a barrier between you and other people,” she tells him. “What worries me is that after we’re married and I’m trying to help you in the way I think right, you’ll shut down that barrier on me.” Later, she wonders if “the deep fondness she felt for him would not offset the pain his difficult disposition caused her. Many times she had seen divorce cases in which mental cruelty was listed as the reason for the breaking of a marriage and she saw that this could happen if she and John married.” When most VNRN heroines are grimly determined to marry the first man who presents themselves, not infrequently accepting a fellow who has previously shown himself to be an ass, it is refreshing to see our heroine consider marriage with the seriousness that it deserves.

Between these two weighty story lines, this novel has more gravitas than most, but it is not wholly satisfying. Judy has more gumption than many, but still has the stereotypical faults of VNRN heroines, such as when she needlessly frets about Dr. Randall’s involvement with a drippy woman no one—much less Dr. Randall—likes. A non-mystery is revealed in the final pages and leads to the overly neat solution to a number of problems. The writing is fine but not great, not campy or amusing, with little humor or joy, and the final pages are a series of declarative sentences that tell you rapid-fire how everything turns out, such as, “Patrick Lockary was operated on the next morning and his operation was successful. Miles returned from Boston with good news about his father.” It’s one of the better books (along with Arctic Nurse and Night Club Nurse) written by the extraordinarily prolific William E. Daniel Ross, but unfortunately that’s still not high praise.