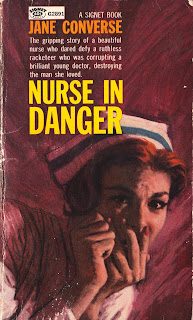 Dr. Dan Agnew performed successful cardiac surgery on Bonnie Castle as part of his normal course of duty. But for this operation there was a special reward. Bonnie’s father was a crooked racketeer, but he loved his daughter. To the doctor who had snatched her from death, he offered anything money could buy. And what Castle’s money bought for Dan Agnew was … the deterioration of talent and his career, the loss of the woman who truly loved him, violence and … deadly danger!

BEST QUOTES:
“You went through med school, you didn’t descend from Mount Olympus. There’s an even bigger shortage of infallible gods than of nurses.”

“I don’t expect him to mumble sweet nothings into your ear with a catlin in one hand and a Number Two S needle in the other.”

“Just about the time you think the guy’s human, he gets a faraway look in his eye, and then he explains why he prefers to use Sim’s abdominal tenaculum over Kelly’s.”

“Take my advice, Audrey. Teach him to relax, even if you have to resort to sedatives!”

“Irene sat tight-lipped, eyeing the famed entertainer with the scorn she usually reserved for unbleached flour.”

REVIEW:
Audrey West is a scrub nurse at Hollywood Memorial in California, usually working alongside the up-and-coming Dr. Dan Agnew. He’s one of those hardscrabble types who had to work incredibly long hours to put himself through medical school, and now he’s one of the most gifted young cardiac surgeons in the country, about to step into the practice of aging Dr. Voss. “One of those superdedicated docs. No time in their busy lives for anything but scalpels, sutures, scissors, and saws.” Naturally, Audrey is totally in love with Dan, and also naturally, though he regularly takes her out, he is reluctant to express any interest in making their relationship official, much less permanent. After a particularly difficult operation, he takes Audrey out to dinner and tells her that he’d thought about marrying her but has decided against it because he has to avoid taking on “additional responsibilities” while he’s still trying to build up his practice. What a guy.

One of the more challenging patients he has is Bonnie Castle, who it turns out has two cardiac defects. He’s planning a complicated surgery to repair her mitral and aortic valve stenoses, and her father, Frank Castle, is extremely grateful. The rub is that Frank is a mafia type who runs a drug operation at the same time as he dabbles in Hollywood personalities, supporting would-be stars and taking a large majority cut of their earnings if they become successful. One of his protégées is Ginger Lampton, whom Dan meets when Frank invites him and Audrey to one of his many house parties. Dan is instantly enthralled with the wild lifestyle—and with Ginger—and begins spending a lot of time on both, which removes him completely from Audrey’s personal life and starts impacting his ability to perform surgery, given his alcoholic excesses and sleep deprivation. Word in the gossip columns even suggests that Dan and Ginger are engaged … “That’s the advantage of putting your faith in a cardiac specialist like Dr. Agnew,” says the veteran OR nurse and friend of Audrey’s. “You get your ticker mended. Or broken. Depends on whether you’re a patient or a darnfool nurse.”

Then a pair of Frank’s goons shows up to drag Audrey and Dan at gunpoint to Frank’s house. It seems that a pair of brothers, Eddie and Monk Cado, have escaped from prison and made their way to Frank’s house. They’ve kidnapped his daughter Bonnie, and will hand her back safe and sound only after Frank’s new chum performs plastic surgery on Monk to make him unrecognizable—because he has one of those unforgettably ugly faces. Surprisingly, Dan attempts to convince Frank that as a cardiac surgeon with only the few surgical tools he brought along in his bag, he is completely unable to perform the procedure on which Frank is insisting. What will happen next? Will Dan and Audrey escape unharmed? Will adorable little Bonnie drop dead of cardiac failure caused by the fright of being kidnapped?

In VNRNs the climax of the book is either much too short or much too long, and here we suffer from the latter: The 40 pages it takes to get through this adventure drag more than a little, especially since the story doesn’t really induce much tension in the reader. Dan and Audrey’s ultimate reunion (you knew there would be one) is delayed because, oddly, Audrey refuses to take Dan back unless Ginger decides she doesn’t want to marry him after all. “It’s not going to be any good if you start out by hurting someone else the way I’ve been hurt,” she tells him, because no one who’s ever broken up with someone can ever date anyone else. But not to worry, Ginger is a good egg who “collected male scalps the way other women collected perfumes or fine china,” and she’s not about to waste time blubbering over some guy who doesn’t want her. Overall Jane Converse is in fine humor, giving us plenty of laughs, particularly in the form of Audrey’s roommate Irene, a health food nut who is always trying to peddle booklets she’s authored such as Add Ten Years to Your Life with Unbleached Flour. Unfortunately, though the book started out with a lot of promise, the “danger” part of the book was mostly just dull, and the only danger you’ll be in, at least in the second half, is suffering from a mild case of boredom.