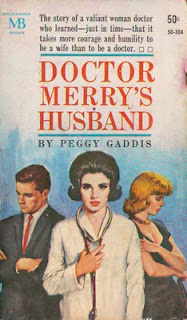 A man can combine marriage and career but when a woman tries to be wife, mother and career girl as well, she may lose everything she holds dear. And when strikingly beautiful Iris Collier pointed out maliciously that Merry’s beloved Hugh was known as “Doctor Merry’s husband” Merry knew she must change things at once. She must be known first as Hugh Prather’s wife and then as Doctor Merry. It was that or lose him ... But how was this to be done?

Dr. Merry’s Husband is actually about a woman doctor, not a nurse, but I allowed it into the category—which turned out to be a mistake. Dr. Meredith Prather lives in River Gap, a small mountain town in some unspecified southern state, where she has taken over her grandfather’s practice. She is married to “a wealthy man, a one-time famous athlete” Hugh Prather, who is the town mayor and a recent transplant to the town; he moved here years ago with a serious illness thinking he was going to die, and Merry cured him. They have two kids, toddler Butch and baby Emily Ann. All is domestic bliss and becoming housecoats—and then the Colliers come to town.

Herbert Collier is opening a shirt factory, and his wife, Iris, is “one of the most beautiful blondes Meredith had ever seen.” She’s also arrogant, and a snob, and taken with Hugh. She tells Merry early on that Merry is being unfair to keep a man as “fine” as Hugh in River Gap. “Inwardly he cringes a bit every time somebody says, ‘Oh, Hugh? He’s Dr. Merry’s husband.’ ” Merry feels the sting of this comment, and anxiously watches Hugh’s increasing interest in Iris. This, combined with the ubiquitous internal struggles about whether she should stay at home for her husband, causes her to ask Hugh if he is bored with living in River Gap, and with her. He replies, “I—don’t get much chance to be bored with you, do I, Merry?” This is apparently meant to be a bitter jab, as Merry bites her lip and cannot speak, and Hugh apologizes profusely. But when she asks Hugh if she should quit her job, he refuses to say: “It’s your life, and you’ve worked hard in your profession …. No man worth his salt could ever ask you to give that up.” She asks Hugh what he wants from her, and he says he wants to go to New York on vacation—but the day they are supposed to leave, she is called to the mountains to deliver quadruplets; the mother and one baby die, and Hugh goes off to New York without her.

What to do, what to do? Well, who really knows, because instead of working on Merry’s problems, we solve Iris’s. We learn that the reason she is such an incorrigible flirt is that she lost her baby to meningitis. Problem solved: Give her the surviving quadruplets!! Once Iris has them, she is a changed woman: “the once gleaming, red-lacquered nails had been filed short and round, and were guiltless of any save a colorless polish.”

Should we return to Merry now? Heck, no! Instead we switch focus to Thelma, a mysterious unmarried pregnant woman who is taken in by Granny Stillers. Thelma is revealed as Janet, the ex-wife of Dr. Andrews, a young intern at Dr. Merry’s hospital. We spend a couple of chapters with Thelma/Janet, then we take quick peeks into two more marriages: Merry’s sister’s husband is planning to transfer to a big city and a big job because he thinks it will make his wife happy. She tells him she is happiest in the mountains, poor as a church mouse, because “I want whatever you want,” and he takes her in his arms, and we cut to a commercial. Then there’s Matilda, the wife of Dr. Nichols, the old oncologist, who turns out to have a tumor that she conceals from everyone until Merry worms the secret out of her. She’s bundled off to surgery and is destined to recover completely, but Merry tells the doctor that his aging wife needs more than that: “You and Jennie watch over her so carefully, and if she so much as lifts a finger, you scold her … Now that she’s no longer as strong as she used to be or so capable of doing things for herself, and you and Jennie are so busy taking work off her hands, I think Mattie has grown a little—well, lonely in a way.” Dr. Nichols promises to be less smothering, and that’s another happy couple fading into the sunset. Back to Janet—her baby is born, and though she has vehemently sworn she will never love her son or ex-husband, the minute she holds the baby, Dr. Andrews is pushed into the room by a well-meaning nurse, and they rush into each others’ arms.
With all these happy endings, we only lack one for Dr. Merry, and we are duly given it: “As Hugh came around and opened the [car] door for her, and drew her into his arms for a moment before he kissed her lightly and set her feet on the steps, Meredith’s heart rang out with a soft paean of sheer joy. Everything was so gloriously right in this most perfect moment of all worlds, and she was surely the most fortunate woman that ever lived.”

What? Where did this come from? If the other three couples are meant to be examples, things do not bode well for Merry. She already has children, so babies will not heal her soul the way they do Iris and Janet’s. We never really find out what Hugh wants her to do about her job, so she can’t do whatever he wants (although she’s made it clear in her inner musings that her job is her calling and she can’t give it up)—but he eventually does get his week in New York, and maybe that’s all it takes.

In the final scene, it’s Christmas Eve, and everyone is gathered at Merry’s house. Merry, her sister, and the longtime hospital nurse are asked to be godmothers to Iris’s triplets, and Janet chimes in that she wants Merry to be godmother to Steve Junior as well. As the curtain draws slowly closed, the happy residents are gathered together, listening to the words of ‘God Rest Ye, Merry Gentlemen.’ And if this doesn’t make you want to throw up, you are made of firmer stuff than me.
Posted by Susannah at 7:19 AM