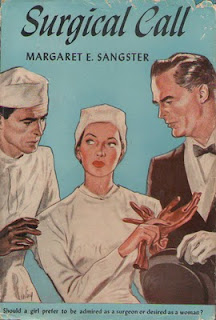 Charity Standish was a doctor—but she was also a woman, and a very attractive one. She could perform a difficult operation with skill and battle death with the finesse that she displayed at the bridge table, but she sometimes found it difficult to dissect human emotions, and soul surgery wasn’t always easy! On the same evening Charity met Gregory Wheelock, stock broker, and Dr. Hugh Evans, who was her Chief-of-Staff at the Cathcart Memorial Hospital. Both men fell in love with Charity, and she, oddly enough, cared for both of them. Gregory was a good pal, a playmate for her leisure hours. Hugh was a man whose work she could admire; and his strange silences and awkward attempts at love-making stirred her deeply. Moreover, he understood her ambitious and was proud of her skill, whereas Gregory believed that doctoring was a man’s profession and that a woman’s place was in the home. The balance was swinging in favor of Hugh when unexpected and dramatic things began to happen. Surgical Call? To doctors on a hospital staff that term applied to emergency duties. To Charity, Surgical Call meant much more. It meant the pull between a profession and love.

And the story more than lives up to the promise of the cover. Charity Standish is a single surgeon in want of a husband. She has a couple of options: gadabout Gregory Wheelock and the silent, dour, Chief of Staff Hugh Evans. As the story opens, Charity, who has been set up on a blind date with Gregory, is winning at bridge when the phone rings. She is on call—hence the title of the book—and has to rush off for an emergency surgery: “A woman was brought in with her foot crushed to a jelly,” the nurse tells her. “I’m afraid it’s to be an amputation.”

Dr. Evans has called her in because “there isn’t a man available.” Nonetheless, he comes to see her usefulness in the OR: “Dr. Evans stepped aside and said, ‘You carry on—your fingers are smaller.’ Charity, realizing the implied compliment rather than the need, did a neat job of tying.” After the job is done, he asks her out on a date, and so the competition begins.

Through the course of the remaining 200 pages, each man is revealed as having serious flaws as potential spouses. One of Hugh’s flaws is that he is serious and intense, and Charity’s relationship with him puts her at the center of gossip at the hospital. Gregory’s is that he not in favor of women working. “I can’t understand you—or any other woman—being a doctor. Why should a girl choose such disagreeable work?” he says. “Women oughtn’t to be doctors, it’s wrong.”

Hugh, on the other hand, understands her work: “You’re not the kind of person who would go into doctoring as a whim or because there was nothing else to do or because you’d read a heap of romantic bosh about hospitals. You’re the sort of person who would have … what I suppose a minister would term a call.” (Which makes the title something of a double entendre—is Charity’s obligation to her career imposed on her from the outside, or is she driven to do it out of personal necessity?—and literary device is not something I expect to find in a romance novel.)

The bulk of the book is a character study of the three central figures: their motivations, their desires, and their choices. Charity spends a good deal of time debating with herself, not only about which man to marry, but about whether or not she should give up medicine. As I followed her through the sexism of her conundrum, I worried about how it would end, but needlessly, as the story turns out surprisingly, and surprisingly well. One has to wonder, though, why Charity feels she has to choose one or the other, rather than hold out for someone better than either of them.

Medicine is a large character in the book, as Charity is constantly about her duties as a doctor. As befits the times, it’s never taken totally seriously: “You ought to have seen her the day she did away with Milly’s tonsils,” says the bridge party’s host. “She might have been on her way to a costume party. She wore the cutest little cap.” It’s naturally archaic; in surgery, she wears a linen gown and rubber gloves, and the patient’s head is bound in a white towel. It’s also a little curious: Charity doesn’t seem to limit herself to one field, as she is performing appendectomies (general surgery), tonsillectomies (otolaryngology), and amputations (vascular surgery), sets broken legs (orthopedics), and runs a women’s clinic (OB/GYN). And it’s not terribly realistic: The amputation she assists Dr. Evans is described as “beautiful,” and the nurse tells them, “I’ve never seen a nicer amputation.” But, in the event that you have never seen an amputation, they are in actuality grisly, messy, and horribly depressing—no one could ever call them beautiful or nice.

The writing is lively and entertaining: When the phone rings at the bridge party, the married hostess says, “Don’t be so edgy, Char. It may be the butcher or the baker or the candlestick maker. It may even be one of my beaux.” The period is easily pictured by the vocabulary, the clothes Charity wears, and the values of the characters. We may not agree with the attitudes they profess, but we never forget that these opinions are almost seventy (!!!) years old. The whole story is a marvelous period piece, satisfying on both an emotional and literary level. And then there is the cover, which I am seriously contemplating having framed for my office. This book really is the complete package, everything I look for in the genre.