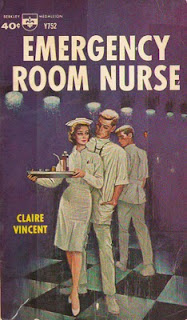 Nurse Pat Estabrook’s destiny was changed the night two strange and mysterious men were brought into the Emergency Room of Hanson General Hospital. Handsome Detective Timothy Wall was called in to investigate the man who gave his name as “John Doe” in the hopes that he would be the important clue in solving a four-year-old robbery … Rod Wuerth, the disciplined chief resident of the Psychiatric Ward, became involved with the other man, a hit-and-run victim who seemed to be suffering from delusions … And, when the case was solved, Pat knew there was no mystery as to the man she really loved …

REVIEW:
More of a mystery story than a romance, Emergency Room Nurse has a little more pull than most nurse romance novels. Pat Estabrook is—you guessed it—an emergency room nurse, with a huge crush on the “black Irish, hard-bitten” detective, whose name is, incongruously, Timmy. (She herself is called Claire a couple of times, apparently the character’s original name in the days before Find and Replace.) When Timmy gets a call from Pat that an Italian man who refuses to give his name has been stabbed in the gut, he is immediately convinced that the man is connected to the robbery of the Baylor Armored Car garage four years ago. “John Doe” is carrying no ID, an expensive linen hanky, and a huge wad of bank notes, and he talk-a like thees: “You let-a me out of here! Don’t want no cops. I’m gettin’ outa here now!” But with Pat on duty he has no chance of that, and after she gives him 100 mg of Demerol and some scopolamine, he is wheeled off to surgery.

With that crisis resolved, Pat turns her attention to another patient, who is the victim of a hit and run. This patient is slightly demented and also cagey about his identity, and “Mr. Thompson” keeps claiming that “my life is in danger, that’s how it is.” But he reminds Pat of her father, so she goes to visit him in the psych ward the next day and crosses paths with Dr. Rod Wuerth, the chief resident there. Pat doesn’t care for psychiatry, or for Dr. Wuerth. “He was never seen in Chung Lee’s or the Korner Koffee Shop … Pat dismissed him from her mind with the tag ‘odd ball.’ ” Nonetheless, begins to warm to him and accepts a date.

Meanwhile, Pat’s protégée, Bonnie, is a “fuzzy-brained, reckless” student nurse who hankers for pediatric intern Frank Cheney. Frank has a lot of money but is close-mouthed and secretive, and when Pat catches him slipping in to see the Italian patient, she wonders, “Why the furtiveness, his obvious disinclination to be seen?” Dr. Cheney and Mr. Doe both have a lot of money, Pat realizes, so she assumes that the good doctor is also involved in the holdup, but she keeps her silence out of her unswerving and unfathomable devotion to the slacker Bonnie.

As she leaves work, Pat is struck on the head and admitted to the hospital (remember, it’s 1963). Timmy grills her: “What is it that would make you dangerous to whoever gave you that bash on the head?” All she can think of is that she has seen Dr. Cheney visiting the Italian patient, but she still holds her tongue.

Then Bonnie, who has blown off her shift, borrows Pat’s coat. After she’s gone, Pat suddenly realizes that whoever attacked her might now attack Bonnie, thinking she is Pat. So she cabs it down to the seedy waterfront to look for Bonnie and arbitrarily wanders into the Rosetta Manuccini Settlement House, a new development built to help the poor slobs. Chatting up the woman at the front desk, Pat learns that Mr. Manuccini is a big gangster called Louie the Man, and he’s supposed to live a few blocks away, but no one has ever seen him, isn’t that strange? And Rosetta’s portrait seems somehow familiar to Pat … Manuccini? Cheney? Hmmm.

But this incredibly contrived revelation only wraps up half the mysteries. So on her way home, Pat is kidnapped by a “thick-necked” guy and his chum and forced to get them into the hospital to see Mr. Thompson, who actually is involved in the bank robbery. On the psych floor the trio runs into Rod, and Pat “stood there sick with terror because a gun had been pointed at him and she feared his life was in danger.” Not to worry, though, it all turns out well enough: They are rescued by the mental patients, Frank’s dad is proved innocent of all wrongdoing, Pat turns down a date with Timmy, and Frank and Bonnie tear off for a hasty wedding, which puts the kibosh on Bonnie’s career as an assassin cum nurse and thus saves many lives. Ron drives Pat home. Slow curtain, the end.

It’s a lively enough book, a decent read. The writing is good, even if a few of the plot devices are more than a little forced, and the final paragraphs are satisfying. When you put this book down, you feel you have not wasted your time, not an overly common feeling with this genre. If you have a couple of hours on a breezy porch this summer, this is a worthwhile companion.
Posted by Susannah at 11:25 AM