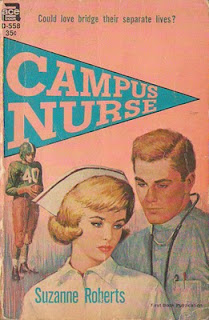 Nurse Candy Foster loved her work at the huge medical center of Conrad University. But when Shep Harris, football star, was brought in from the field with his life and his sight threatened, Candy’s contentment burst like a fragile soap bubble. For this boy, once self-confident and assured, was now reduced to a life of fear and dread. Shep reached out to Candy, the one person he felt understood his feelings. And she responded with warmth. How could she know his feelings would turn to love and that love was the one thing she was unable to give her patient?

BEST QUOTE:
“I’m so glad I managed to fall in love with a guy who loves to eat as much as I do. It makes things so nice and uncomplicated.”

REVIEW:
Campus Nurse opens when young nurse Candy Foster (was there really a time when people were named Candy?) is strolling across the campus of Conrad University on her way to work at the hospital there and is nearly run down by football star Shep Harris in his roadster. After he apologizes for almost killing her, he says, “I’ll bet without that dopey uniform on, you’d be a knockout.” In response, she thinks, “There was something about this boy that somehow made her feel angry. It was a kind of prolonged adolescence, a kind of little-boy fever which she found unattractive in a man his age.” So you can bet that it won’t be long before they’re engaged.

Sure enough, their paths meet shortly afterward when Shep collapses on the field during the big game that afternoon. When he is brought in, Candy tells young intern Mark Connor that Shep’s eyes had been “unusually dilated” that afternoon (when in fact they had been “terribly contracted, as if the bright sunlight bothered them”—so much for her observational skills). Turns out Shep has a brain tumor, and a couple days after he checks in to the hospital, he goes blind. She goes to visit him, and he becomes instantly obsessed with her, calling her name all night, begging her not to leave him. Candy, for her part, feels some sort of half-love, half maternal instinct, and is drawn to him as well. Before long he’s proposed to her, just before he is wheeled into surgery, and she accepts, even though she “wasn’t sure if she loved him, could love him, or just felt a deep psychological pull that forced her to answer his cry for love and tenderness and understanding.”

After this, Shep takes a decidedly creepy turn. His surgery is a success, and his vision begins to return, but he is convinced he is a cripple, and he becomes increasingly demanding of Candy. He expects her to be with him every minute she is not working, and every time she goes to see him, “the invisible chain seemed to tighten slightly.” One night she forgets that she has told Shep that she would visit him and goes out with Dr. Connor for a hamburger—so Shep pushes his way past his nurse in the hospital and, in an attempt on the stairs, falls down a flight and knocks himself unconscious. “What happened tonight was my fault,” Candy tells her roommate. “I don’t know how I could have been so selfish—going out with Mark, enjoying myself like I did, when Shep was up there waiting for me.”

Candy runs into Shep’s former girlfriend, who he dumped for Candy, and she says, “I know how he is—how demanding he can be … that’s the way he was with me, when he was in love with me. Jealous, dependent on me, calling me at all hours at the sorority house, worrying about whether or not I loved him, that’s the kind of lover Shep is.” He is running true to form with Candy. He keeps insisting that his vision will never improve, and he’s very upset when he is discharged from the hospital. “Look at me!” he tells her. “Look how shaky I am, how—kind of feeble. I feel like and old man … half-sick, half-blind.” He grabs Candy’s hand. “Without you … everything scares me. God, how I need you, Candy.” Before long he’ll be knocking her around, stalking her when she leaves the house, and eventually stabbing her to death despite numerous restraining orders. But not to worry, Candy is saved from this horrific fate when the school decides to have a Shep Harris ceremony at the next football game, and Shep is suited up and sitting on the bench with the team. And I don’t even have to tell you what happens next.

It’s a curious little story, mostly because with a modern eye one can recognize how truly manipulative and dangerous Shep is. Though most of the other characters in the book also see that Shep is out of control, including Candy herself, it’s not enough to put a kibosh on the relationship or Shep into some very intensive therapy. It is somewhat frustrating to watch her continue to be sucked in and used by him when she seems to know it’s not going to turn out well for her, not just personally, but professionally as well—she recognizes that Shep will force her to give up her nursing career, which she values above everything else in her life, if they are married. But the situation ends quickly enough not to become outright irritating, and all things considered, this book is an easy enough read, if not anything special.
Posted by Susannah at 9:12 PM