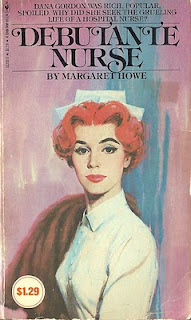 As Dana Gordon put on her new mink coat, she remembered the quizzical eyes of the young intern. To him she was nothing but an ornament—beautiful but useless. At that moment she made her decision to show him that she had the courage and will to win a place in his hard, dedicated world of medicine—even if it meant giving up her soft, glittering social world.

BEST QUOTE:
“The respect of those student nurses would mean more to me than ten mink coats, Kate.”

REVIEW:
Dana Gordon is an Ohio girl attending college in New York, which is a bit of a controversy at home. Her mother thinks “it’s foolish for a girl to spend the best years of her life going to school.” Dana insists, however, because she felt the “desire to take a college course which would fit her for something more than the social future her mother anticipated for her.” Mom has been planning, since Dana was a toddler, that her daughter marry Jeff Forrester. Dana and Jeff are the products of business partners, both made wealthy by their venture, and this has doomed the couple to a fairly miserable existence—him as “still handsome, with a little added weight. Still stubborn and yes—lazy. Indifferent to everything but his golf score and the possession of the latest-model car.” Her as someone who will “acquiesce in anything they plan for me,” someone whose only future is as a wife. “Are you real, Dana Gordon?” she asks herself.

But she’s beginning to think that she would rather do something useful with her life, and that she would rather not marry the indolent Jeff. What has made her “talk like a Communist,” in her mother’s words, is that back in New York, she took a college chum with a broken ankle to the hospital, and there she saw “all those girls who wore their white caps so proudly.” She admires the nurses’ “serious occupation,” the fact that they don’t waste time shopping, and that “a uniform did not disguise a girl’s beauty. Instead, it enhanced even the plainest girl’s looks.” And, of course, she also meets “a man quite unlike Jeff, a man who did not accept life as one long holiday.” That would be Dr. Martin Emory, an intern orthopedic doctor, a man with “square and strong” hands.

She tells him she wants to become a nurse, and he all but laughs in her face. “I suppose you think I haven’t enough character to do anything more exhausting than dance the samba,” she snaps at him. She next tries the idea on the nursing superintendent, who also looks down her nose at Dana: “I have no reason to believe that a debutante would make a good nurse.” But Dana perseveres. Her father strikes a deal with her: If she keeps going with Jeff, he’ll let her go to nursing school here in town. The reason he’s keen to see her with Jeff is more than parental concern for her future. He agrees that Jeff is weak and lazy, but “business was rotten,” he tells her, and “our financial future depends too much on what Kent Forrester”—Jeff’s father and the owner of the business that employs Dana’s father as its president—“thinks to allow Dana to rush into a situation which will upset Jeff.” So she pretends she cares for Jeff, which is easy once he leaves to go back to school in New York—and more difficult after he flunks out of school and returns to Ohio.

When nursing school starts, the other girls shun her—they’re a little jealous of her cashmere and two mink coats. But she takes her roommate for an attractive haircut, and then they begin to warm to her: “Kate’s appearance brought requests from other girls about hairdos and clothes.” Apart from learning about makeup, there are other subjects to master—and it turns out that nursing school is hard! “ ‘Now we have to study,’ said Dana, with a frown. ‘I didn’t realize that. And most of the study is boring to me. I always hated physiology when I went to grade school. I avoided everything like science. Now I have no choice.’” It does strike me as odd that someone who hates science could really make a go of nursing as a career—or would even want to—but there it is.

If it’s not a love of science or medicine, what does she see in nursing? It seems to me she is looking more to gain control of her own life, and become more than just a puppet. “You’re a person too, Dana, with a right to plan your own future,” her roommate tells her. When she tells Dr. Emory that she is enrolling in nursing school, “She could read surprise in his face. Surprise and something else she had never seen on a man’s face before. Respect.”

Even though nursing schools is difficult, and she does flunk a few tests, she pulls it off. She even snags Dr. Emory—the catch is that she has to keep pretending to go with Jeff, and he gets drunk and marries a tarty showgirl and makes Dana promise not to tell anyone, and everyone thinks it is she who has eloped with Jeff, and what will Dr. Emory think when he hears this? It’s a little contrived, and frankly, I just didn’t really give a damn what Dr. Emory thought of it, because even if he were to become upset, it wouldn’t take much to put the situation to rights.

Debutante Nurse is really a much lesser version of Nurse Landon’s Challenge. It was mildly interesting to watch Dana find herself, but her choice of nursing, and her success in that field despite any apparent interest, was a bit unbelievable. I have to say that one of my favorite things about this book is the cover, which I see as a sly pun on the portraiture of wealthy Americans at the turn of the century; think John Singer Sargent painting a red-headed nurse. Which really isn’t enough to make this book worth reading.
Posted by Susannah at 9:32 PM