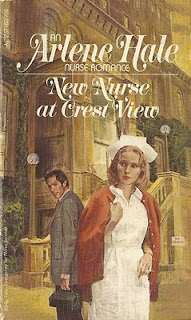 Nurse Selena Smith held back the tears as she handed in her resignation to Doctors’ Hospital. There was an opening at Crest View Hospital, and the change might help her forget her broken romance with Dr. Evan Newton. Selena’s new job at Crest View proved unexpectedly pleasing. She’d met a man named David Bancroft—handsome architect and part-owner of Crest View. And, soon, they were dating. But one night—unexpectedly, terrifyingly—fire broke out at Crest View. All were called up to volunteer—including a visitor, Evan Newton. And when the danger was over, Selena, gasping, begrimed, stretched out her arms—to the man she loved.

BEST QUOTE:
“He couldn’t kiss Paula without feeling he’d taken half a cosmetic counter away with him.”

REVIEW:
Selena Smith is, in a word, a dish. This is a big chore for her because, gosh darn it, “I’ve had wolf whistles up to here!” Even though she is a good nurse who on the opening page has just substantially contributed to saving a patient’s life, Dr. Evan Newton “didn’t see her as a person of worth and ability.” Instead, he considers her to be “someone to have fun with—a good time—a pretty woman on his arm to lift his ego! He never considered that she had a brain in her head ….” Men are such pigs.

Selena is, of course, in love with Evan, but shortly after the book opens she breaks it off with him because he just wants to have fun, while “I’m not interested in just a good time. I want more, Evan. Something deeper. … I’m not just a little plaything for you to toy with in your free time,” she tells him. “You’re too intense. Too serious,” he answers, and stomps off. She’s broken-hearted, so she quits Doctor’s Hospital and goes to work at the Crest View convalescent hospital, so she won’t have to run into Evan any more.

There she meets wealthy architect David Bancroft, who is the son of one of the patients. He asks her about herself, never forces himself on her, and seems a generally good guy. Naturally, she has no interest in him. But she keeps going out with him, and tries to convince herself that she should marry him—he proposes on their second date—because he’s nice. But for not working together, she and Evan do keep running into each other a lot, and when they do, they just bicker some more. Will Selena compromise her values and just be the accessory on Evan’s arm? Will she accept David? Will Evan ever see her as more than just a pretty face? The suspense is killing me!

The book seems to want to have things two ways with Selena’s interest in a serious relationship with Evan—though she resists it from David, it seems she wants to be talking about marriage on the second date. Evan tells her she’s moving too quickly: “We aren’t getting married tomorrow or anything, you know.” She replies, “How did marriage get into this?” But then just a half-page later, she’s thinking the argument is futile: “Evan wanted a playmate, not a wife.” Must every relationship begin with a sizing up of its prospects of ending in marriage? I guess this is still a question being pondered by singles today.

This book is another one of those tossed-off books that seems more like a drawn-out short story. The plot is fairly nonexistent, and there aren’t any other interesting aspects to this book to think over, either. Once you’ve read the back cover, you really know all you need to about this book—so don’t bother to open it.
Posted by Susannah at 11:19 AM