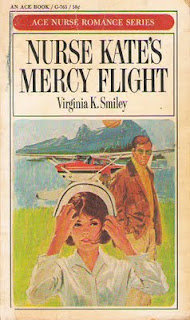 Running won’t help—but I can’t go back! That was Kate’s desperate thought as she fled to Alaska, far from the New York hospital where the young nurse thought she had been fatally and tragically negligent in her duties. Here, in the land of the midnight sun, in the remote settlement where her aunt and uncle ran a bush pilot service, Kate was determined to isolate herself, to hide from love and her duty as a nurse. But she didn’t figure on the dangers the pilots faced daily—those brave cheerful young men who wanted her friendship, and needed her help. Most of all, she didn’t figure on Jeff…

BEST QUOTES:
“He watched them intently as they approached and Kate wondered if her slip was showing.”

“She looked at Jeff and he was so very, very masculine.”

“She knew that even the sight of a cut finger would throw her into a tizzy now.”

REVIEW:
Kate Porter is a nurse from New York who has made a possibly fatal error: She was so intent on sneaking off for an unapproved coffee break with Dr. Jim Lang, “dream price of Memorial,” that she gave little Josy White the wrong medication, which killed her. She responded like a true professional and hopped the first flight to Alaska, where her aunt and uncle live and run an airplane taxi business. This means she meets a lot of pilots, all of them single except the black man, for her to pick over. She also refuses to do any kind of nursing, but no one bothers to ask why. No one—except Jeff Ewing, who is British and also engaged to a young woman who despises Alaska, so the lovers are at a bit of an impasse. Kate does actually unburden herself to Jeff early on, but this changes nothing.

Kate’s moment of truth comes when one of the pilots crashes in a storm and can’t be found. The “mercy flight” of the title is the single mission Kate goes on with Jeff, five days after the crash when the main search has been called off. You’ll never guess what happens! “Suddenly she blinked. Had she seen something red glisten in the sun down there among the trees?” Jeff and Kate hike a mile into the woods to reach the pilot, and Kate proves herself more of a nurse than some VNRN heroines by actually stifling her screams when they find him. Patching up the pilot, “Kate realized more and more that she was being herself again. … She hadn’t liked the gloomy Kate of Alaska.” Funny, she hadn’t seemed all that depressed.

Not much really happens in this book. Kate takes a few sight-seeing trips by plane, like a tour past Mt. McKinley, and to remote fishing villages with the old doctor, whom she refuses to help. She works the lunch counter at her aunt’s diner and bakes pies. She banters with the pilots and goes out on dates with them. And every now and then we are told how broken up about the New York incident. She agrees to go to a baseball game with one pilot, because “she needed it, she told herself. She needed it badly.” Out of the blue, about 80 pages into the book, we find out she isn’t sleeping at night. “She couldn’t cope with her feelings much longer. Her nerves were getting more frayed every day.” Then a page later she’s dressing in a pink linen shift and matching jacket for a date. This book is not laughable or badly written, but there’s no real reason to read a story in which nothing happens. The best thing about this book is the cover, so stop there.
Posted by Susannah at 8:03 AM