A Challenge for Nurse Melanie 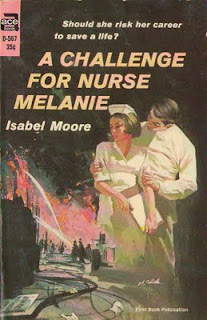 By Isabel Moore, ©1963
Cover illustration by Bob Schinella
Melanie Woods had all the qualifications of a fine nurse—intelligence, quickness and dedication. But one fault threatened her brilliant career; she placed people ahead of rules. So when Melanie, acting almost instinctively, performed an emergency tracheotomy with only a penknife and a key, the Director of Nurses gave her a final warning. Although Melanie promised to obey hospital rules in the future, could she live up to her promise when a dying man requested the one thing forbidden to him?
GRADE: A

BEST QUOTES:“A high, bateau neckline had, this year, replaced the V-neck which, Edith Roberts had decided on excellent evidence, offered much too good a view to male patients as students bent over to take a pulse or a temperature reading.”

“Now, just to shock the town if for no other reason, she deliberately wore the tightest sheaths she could squeeze into, went into a bar to drink alone if she felt like it, and allowed boys she had known before her marriage to take her out.”

“It wasn’t right, somehow, thought Sally, for such a pretty young girl to be so—well—masculine.”

“The students took their meals in the hospital cafeteria, if they felt wealthy enough to afford the fifty cents or so it cost for lunch.”

“When I entered nursing, it was with a feeling of dedication, of putting others before myself, of knowing the satisfaction that comes from putting all of one’s self into whatever job one is doing. These girls seem to have nothing on their minds but finding a husband—preferably a rich patient or a promising young doctor!”

“Nurses nurse, Melanie. They don’t doctor. And above all, they don’t make public spectacles of themselves.”

“What a dope. That spirit of dedication to good old Fletcher [Hospital] and the patient isn’t going to get her a thing except fallen arches and a home for retired nurses.”

“ ‘Nursing!’ she had huffed. ‘Seeing men with their clothes off. Seems to me there’s something downright indecent about it!’ ”


“We never know what the day is like until it’s ended.”

“Marriage … that’s the best thing for a woman.”

“Pride is a luxury no woman in love can afford.”

“What finer future can a girl have, really, than to find a man she loves, who loves her back, and marry him?”

“Most of our lives are based on dreams.”

“Even when hope is dead, she thought, the heart still hopes.”

REVIEW:Right on the first page, Melanie Woods, a student nurse, does something very bad: She saves a man’s life in the Blue Ribbon bar by giving him an emergency tracheotomy with a jackknife and a key. When it’s all over, and the bar patrons are looking at her with “something close to distaste if not dislike,” and her roommate Sally says to her, “As far as your superiors are concerned, you’ve simply broken every rule in the book.” As they say, no good deed goes unpunished. Her fiancé, Andy Strand, adds, “Everyone thinks it just wasn’t—very ladylike, and that maybe you were just trying to be a—a sort of show-off.”

But Melanie’s lives by her own lights, chief of which is, “What are rules compared to people?” Naturally, this isn’t going to sit well with the folks in charge. She’s known as “the most fiercely dedicated young student to ever cross the threshold of Fletcher Hall, and at the same time, one of the fiercest rebels.” In fact, some wonder why she didn’t just go to medical school and become a doctor. But she couldn’t afford it: Her father was an inventor whose lucrative creation was stolen by magnate Sam Fletcher and whose spirit was broken by the incident, driving him to alcoholism and an early grave.

But every nurse should have a boyfriend, and hers is “basically weak, and that was why she was afraid to trust him with her life.” It seems she’s been unwilling to agree to a wedding date. And with good reason: It’s not long before he’s chasing after a sophisticated New Yorker ten years older than he is who strings him along for fun. He asks Melanie for his ring back, because “maybe Mom is right,” and he should be seeing other people. When Dr. Steve sees her ringless hand, “he was oddly pleased, which should have warned him, but it did not.” Steve is engaged to a New York socialite, and when his residency is up in six months, he is going back to her in the big city to establish a cushy uptown practice. But he approves of her spirit, how she stands up to the head nurse (always on behalf of someone else), and even thinks her stunt in the Blue Ribbon was “courageous.”

In typical VNRN, Sam checks in to his own hospital, partially blinded by melanoma made worse by a heart condition, and he will be dead in a matter of months. Melanie is sent to take care of him, of course, being the best student nurse in the hospital, and “she’s even good to look at,” as Steve points out to the old man. Before long, Sam has developed a great fondness for her, and she for him, seeing him for the lonely pitiful old man he is. He convinces her to allow him an occasional glass of whisky, though this is expressly forbidden by the doctors, because it’s the only thing that eases his pain.

This is eventually discovered by the head nurse, whom Melanie has worshipped all her life, who dismisses Melanie from nursing school, a month short of graduation and a week from Christmas. The showdown is a little heartbreaking, the stern disciplinarian who turned down the love of her life for her career scolding Melanie for caring too much. “If, in order to be a nurse, I have to become someone—inhuman, then I have no wish to be a nurse,” Melanie responds, and throws her cap on her mentor’s desk. She runs out the door and straight into Steve’s arms, and he takes her out for coffee and, just to put the final nail in her heart, tells her that though he loves her, he cannot marry her because he doesn’t want to spend his life in that small town. But then the final crisis, foretold by the cover, erupts, and Melanie redeems herself and gets herself reinstalled in school just in time to collect a diploma. Then there’s just Steve’s fiancée to dispose of, on Christmas Eve, when she pitches a fit in the ED and throws her engagement ring at him, and, as Steve says, “That’s that.”

This is a really good book. Nursing is not tidy or sanitized, and people have messy human lives. One young woman commits suicide by carbon monoxide because her married boyfriend won’t leave his wife. Children are born with heart defects. There are several alcoholics, including the man Melanie saved in the bar, who had passed out and choked on his own vomit. Women get breast cancer and die, even after radical mastectomies. The characters are believable and endearing, but things don’t work out for everyone, and leading characters don’t survive the fire. The book is well-written and absorbing, and I read it in one sitting (which I would have done even if I weren’t on a long plane ride). And this is the only VNRN of the 102 I’ve read that made me tear up, just a little, at the end. I’m a little grieved that this seems to be the only VNRN that Isabel Moore ever wrote, but this book is an absolute keeper.
Posted by Susannah at 11:50 AM