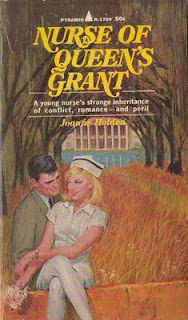 When lovely young nurse Anne Carter inherited a New England estate, complete with mansion, her life found strange new paths and problems. The possession of Queen’s Grant meant the fulfillment of a cherished dream, yet brought her bitter enemies. For another thing, she was faced with a choice among three attractive men: Dr. Steve, who loved her perhaps too possessively; Bob, the fascinating stranger with a mysterious past; and Brad, the “boy next door”—who happened to be a millionaire! No matter what happened, Anne Carter knew her life would never be the same!

BEST QUOTES:
“This kind of dancing is for me, where you get to hold a girl in your arms instead of circling around her, or vice-versa, or bending double so that your cranium all but bumps the floor!”

“Twenty-two is not exactly infantile.”

“I really ought to spank you for being a stubborn little idiot, but I think I’ll kiss you instead.”

REVIEW:
Nurse Anne Carter has been dating Dr. Steve Atkinson for a year, and in that time he has proposed three times. She has turned him down on all three occasions because “his manner was too assured, too arrogant,” and he acts as if he “owns” her. Naturally, she continues to date him. She has just inherited The Queen’s Grant, this huge estate in Massachusetts, from her aunt. She goes out to tour the place and finds Robert Rowe, a handsome charmer, who is claiming to be Anne’s aunt’s grandson and asking for a slice of the inheritance. “Anne didn’t intend to be taken in by him; she would tell him off in a hurry!” Indeed, she manages him exactly as she has managed Steve’s unwelcome proposals: She invites him to move into the estate until his claim can be worked out. She becomes irritated when Bob immediately takes over the place as if he owns it, and she knows she is going to have to hash out his claim on the estate at some point, but “Anne had decided to let the present situation drift along as it was.”

Steve and Robert are expecting Anne to sell the place, and she is grumpy about their presumption. Everyone “simply assumed she had no mind of her own,” she grumbles to herself, when actually, they may be on to something. But she does have a plan for TQG. She wants to turn it into a rest home! It will be “a model for the aged and temporarily homeless. … She knew what she wanted to do; her life would be worth-while!” Naturally, this plan goes over like a girl in a nurse novel who wears glasses. “You think you’ve been fingered for a Dr. Schweitzer role because your aunt left you that place in the wilds of Massachusetts,” Steve all but snarls, just after he’s proposed to her for the fourth time with a huge square-cut emerald. “You’ll never make a go of that rest home stuff. … Your carelessness about details when you plan to take on something like this proves that you need someone to look after you.” Even though she tells him that “maybe” she loves him, she says she’ll marry him if he will support her scheme. Then someone threatens to throw himself off the roof of the building they are in, and the discussion is tabled.

There’s a third gentleman in Anne’s stable, Charles Hamilton Bradford III, or Brad. He’s the 23-year-old millionaire next door, and they meet when he invites her out to inspect two acres of land between their estates that each claims to own. TQG being made up of 300 acres, and he being so rich and all, it’s not clear why they can’t just take one acre each and be done with it, but they seem intent on keeping up the hundred-year-old squabble. Nonetheless, he throws a party for “the new and decorative owner” of TQG, and she makes a show of batting her eyes at Bob and Steve to make Brad jealous. A few pages later, she snubs Cynthia, a local party girl who makes a play for Steve, by calling her his “little sister” and then steering the conversation to his work at the hospital, a subject on which Cynthia has nothing to say. When Brad tells Anne she is leading Steve on, she responds hotly that she and Steve are “just good friends; nothing more.” Steve proposes yet again, followed closely by Bob: “You said yourself we were second cousins,” he says. “We won’t have feeble-minded children.” A proposal like that is hard to turn down, but a nearby forest fire saves her from that conversation.

Bob, however, is not to be put off. After he is revealed—surprise!—as a fraud, he turns up in Anne’s bedroom in the middle of the night to spirit her off to Mexico. “I’m not kidnapping you, darling,” he tells her, “I’m persuading you to come with me.” Anne cannot imagine why Bob wants to marry her, until “it flashed through her mind that Bob might be a drug addict, although he had given no indication of it in the weeks she had known him. It would explain his wild idea of getting her to marry him to finance a costly drug habit” with her aunt’s legacy. Thinking quickly, she shoos him out of the room so she can get dressed. What does she do next? Why, get dressed, of course! She packs a suitcase full of books and a towel, curiously, and is about to walk out the front door with him when Brad and the police turn up on the doorstep with the housekeeper’s missing grandson. It’s amazing how these urgent situations pop up to save Anne from marriage. Bob immediately ducks out the back door, and it completely escapes Anne’s mind that she might want to mention what’s going on to the cops. There’s another random and bizarre event before the book runs down, and Anne is finally engaged without meddling suicides, forest fires, or runaways to interfere.

I’ve said it before, and I feel certain that I will say it many, many more times: I can’t stand a stupid heroine. Anne is hypocritical, spineless, and a tease. She is constantly ranting about how no one takes her seriously, but she has no gumption and accomplishes nothing, not even shedding herself of men she doesn’t like. After Steve’s fifth proposal, she tells him, “If you can’t let me make a decision before we’re married, how can I hope to be anything but a slave afterward?” Yet again and again, Anne proves herself incapable of making any decisions. She expects the men in her life to carry her ideas to fruition; even the rest home idea is pawned off on the elderly town GP, who sets up a medical advisory board to do all the heavy lifting. I wonder if the strange plot twists are meant to be seen as bizarre and therefore funny, but they are not so egregious as to be hilarious, as they are in Nurse at the Fair, and instead are just stupid and annoying. Don’t waste your time with this book.