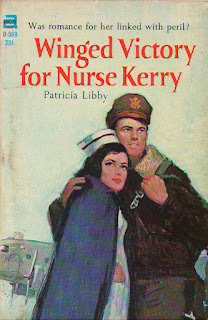 When Kerry came to Hartford Memorial Hospital, she wanted to forget the past, with its nightmare of the airplane crash, and Johnny … She did not want to risk love again. Yet Dr. Garth Hamilton, handsome and rich, offered her a new kind of love, a love that protected without demands or challenges. Kerry knew she would be safe with him. But there was another doctor, a young man with stormy eyes who reminded her of the lost Johnny … and the spark of his courtship threatened to kindle a flame in her that would push security away in a renewed memory of peril and ecstasy.


BEST QUOTES:
“It was nice to be regarded with something akin to awe. Did lots for a man’s ego.”

“She was a tall girl with creamy skin, black hair, and the kind of a figure that even a critically ill male patient had been known to appreciate.”
“The Officer’s Club. Center of the base social life and springboard to romance.”

“It isn’t nurses that I dislike. It’s career women in general. When they work it tends to make them competitive and independent. They lose much of their femininity. But you’re different, Kerry. Gentle, vulnerable. All woman.”

“Don’t lean too close with that sensational figure of yours, or he’s liable to have a relapse.”

“Don’t look so embarrassed. You aren’t the first nurse to be caught necking in the sacred halls of Hartford.”

“She might fail as a woman, but never as a nurse.”

“Smile if it kills you, sweetie. No man likes a moody girl.”

“Brett slept on through dinner and dishes and Gina washing her hair.”

“Honesty was a vital part of courage.”

REVIEW:
After the long dearth of good nurse novels that I have recently endured, I am all the more grateful to Patricia Libby, who has given us a pretty good book with Winged Victory for Nurse Kerry, even if the title is a bit of a mouthful. In Ms. Libby we have the campiest writer in the genre, who can toss off phrases like, “There was no security in Brett—only challenge,” with a flip of the carriage return on her Smith Corona. We have high drama, in this case a plane crash into the ocean that left our heroine bereft of her fiancé, Johnny, and with an enduring phobia of airplanes. And we even have characters whose evolution over the course of the book is its central theme, and the boys circling around the perimeter are just the prizes for conquering your personal demons.

Kerry Kincaid had once been a second lieutenant in the Air Force, working as a flight nurse with pilot Major John Bowman. But then came the aforementioned plane crash, in which he tows her through stormy waves to a life raft, then slips into the briny depths, à la Leonardo DiCaprio in Titanic. After 11 months in the hospital, she’s honorably discharged and lands a job at Hartford Hospital in San Diego. She’ll never love again, or step on a plane, either. But she can still date, and Dr. Garth Hamilton, a wealthy OB/GYN senior resident, quickly impresses her with his showman-like skill in the OR and lines like, “It seems to me that a little girl like you belongs in a house dress instead of a uniform.” He obviously prefers his girlfriends without spines, and she’s only too happy to oblige: “Garth knew the terror she’d been through. He wouldn’t ask her to be brave, to put aside memory and do things that were beyond her. The strength that Garth Hamilton offered seemed like a kind of haven. Suddenly she wanted to lean on it. Let herself be protected, sheltered.”

On the other hand, there’s Dr. Brett Taylor, a ladies’ man, flippant, brash, demanding, and rich, too. And—can you believe it?—he owns a plane, which he uses to make mercy medical missions to Mexico. No girlfriend of his can be afraid of flying, so he presses Kerry to let him take her up in his plane to conquer her fear, and she shrinks in terror until Garth steps in and defends the frightened little mouse nurse. When Brett hears that Kerry is dating Garth, he snaps, “It should prove to be a sterile relationship. No danger of you being infected by any consuming emotion.” All they do is argue when they meet in the cafeteria, but she allows herself to be coerced into a date with Brett, largely because his humble dedication as a surgeon and his Mexican missions bespeak a big heart inside the wolfish exterior. Before long, over the hospital bed of a young boy whose life Brett has just saved, they’re kissing and declaring their burning love for each other.

But it’s only page 69, so we’ve got time for more internal struggle. Garth does not approve when he finds Kerry specialing a young Mexican patient of Brett’s who has suffered severe burns: “Brett has no right to carry his experiment in psychology this far, forcing you to accept challenge in the belief that it will give you back your courage. Make a strong, self-reliant woman out of you. Kerry darling, don’t allow Brett to make you into something you aren’t. Something I don’t want you to be.” This actually gives her pause, and then, on a date, Brett decides to surprise Kerry with a little trip to the airport, telling her he’s going to take her up in his plane. She becomes completely hysterical, running out onto the landing strip, and Brett has to bundle her back into the car before a plane runs her over. He takes her home and tells her that he can’t see her again: “You need a different kind of man. One who won’t push and demand and apparently hurt you so much.”

So when Garth proposes to her, she accepts, because she thinks marriage to Garth will bring a life of security and peace—and then she meets his parents, a snooty pair who immediately starts impressing on Kerry their need for grandchildren. She is unnerved by this, but when Garth tells her that his parents are coming with them on their honeymoon in Hawaii—which is going to be a business trip as well, by the way—she says nothing of her discontent with his fabulous idea. Garth, who doesn’t know when to quit, then tells her that he is having her transferred from surgery to OB/GYN so she can special a rich woman who might send Garth lots of referrals if she is pleased. “It had never occurred to Garth to ask if she minded the transfer. He simply took it for granted that she’d follow his wishes, just as with the honeymoon arrangements.” But she still can’t tell Garth what to do with his spoiled, rich patient, so she goes to the chief of staff and asks him not to take her out of surgery. Dr. Keller tells her he wouldn’t have approved the transfer anyway, then mentions that Brett is flying to Mexico shortly to work at a village wracked by typhoid fever. Will she go with him? Panic ensues, and she quickly flees Dr. Keller’s office.

Safe inside the elevator, she promptly has an epiphany: “Everyone wanted to decide things for her. Garth. His mother. Even Brett. Did they all think her incapable of decision? Unable to stand alone? And was she to blame? The choice was suddenly, frighteningly clear. She could marry Garth and be babied, asked to do nothing more hazardous than compete in tennis and bridge. Or she could be the real Kerry Kincaid again. Dependable, self-reliant, unafraid to make decisions and stand by them.” Guess what she does next? Well, it’s not a completely straight road; she still tries to convince herself that “Garth would make a wonderful husband. She was lucky to be marrying him.” It’s irritating to watch her waffle, though it is quite clear to us what the right, and best, choice is. But it’s just a few pages until she’s finally resolved, and the ending is actually kind of cute—a real rarity in VNRNs.

I found this book all the more pleasing because Kerry is made whole again not by one guy or the other, but by her own design. Though she ends up taking the path Brett would have her follow, it’s on her own timetable, not his; Brett’s attempt to coerce her onto his plane on their date fails badly, and when she eventually does get back on a plane, it’s because she has made that choice herself, not because someone else forces her to. I also feel compelled to note that this book, like many VNRNs I’ve read, takes a rather dim view on wealth. Poverty is noble in these books, and if you must have money, you have to work pretty hard to overcome that disadvantage by ruthlessly sacrificing yourself, for example, in impoverished Mexican villages. Not that there’s anything wrong with that, but it’s seldom poor doctors who take on these missions; they’re too busy working themselves to the bone to get through their residencies and refusing to marry their girlfriends. Fortunately for Kerry, Brett has money, so they can get married and she can keep working, so as to prove her worth as a useful person. Happy endings for all.