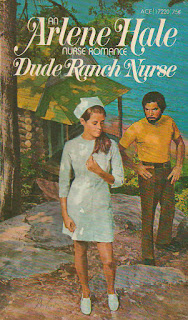 
Jan Gordon came to Deer River, with its dude ranches deep in the Rockies, in order to thrust aside all the unpleasant memories of the past and rediscover herself. But Jan found that as a nurse and as a woman, she couldn’t turn her back on conflict. There were two young doctors in Deer River; Jan owed loyalty to both. To Dr. Coe, Jan was bound by her conscience, but it was Dr. Lester who held her heart.


BEST QUOTES:
“You’re too pretty to be a nurse.”


“You’re more than a nurse. You’re a woman. You know that no matter how important he is, or how old, or even how tough, a man needs the touch of a woman’s hand.”


“There’s some joy in gettin’ sick, if a fellow’s got a pretty nurse like you.”


“I let a few women slip through my fingers. Nice, tasty tidbits, but a man can’t exist on that sort of thing, can he?”


“Wow! Man, you were pretty before, but that uniform really does something for you.”


REVIEW:
The cover of this book, after I posted it on my companion blog, Vintage Romance Covers, earned more comments than any other (so it was just two, but still!). I take it from this (albeit meager) sign that the general public holds some interest in this book, perhaps similar to its feeling for Hootenanny Nurse. These titles epitomize the extremes of the genre and bespeak great possibilities of camp, adventure, and fun. If only what lies inside held half the joy of its promise. Dude Ranch Nurse, I am sorry to say, has one E too many in its title.


Now, some may call this a quibble, but our heroine, Jan Gordon, does not work at a dude ranch. In fact, the only time we actually see one is when spends an evening at Pete’s Dude Ranch on a date, and then it’s a passing reference to singing cowboys and thick steaks. Jan has left her home and a boring, nice guy there to “chase her rainbows and satisfy her dreams and search for that elusive thing called happiness.” Just so you know, this is actually a bad thing – the smarter plan would have been “to fall into a dull, humdrum routine. It would have been safe, secure.” But here she is, in Deer River, Colorado, an hour into the mountains from Denver. She gets off the bus and carries her letter of recommendation straight to Dr. Dan Lester’s clinic, and he hires her on the spot, as his son, Dr. Noel Lester, is expected to return home from a few years in New York doing research, and Noel will need a nurse.


The Lester clinic is a shabby place. The paint on the walls is peeling, the linoleum is badly scuffed, the medical equipment was “only fair and very old.” It’s staffed by Nurse Schmidt, one of those stereotypical battleaxes: “the buxom, hard-eyed, tough kind … that sassed patients, jabbed roughly with the needle and ate spike nails for breakfast.” The only thing it has going for it is that it’s “scrupulously clean.” Needless to say, patients are in short supply at Dr. Dan’s. Across town, though, is the Coe Clinic, run by Dr. Mavis Coe. Her establishment is new, modern, decorated with plush carpeting and the latest in medical technology. She even has a few hospital beds, which saves desperately ill patients from being trucked to Holden General Hospital, 20 miles away, in emergencies. Jan’s first day in Deer River gets her into the Coe Clinic when a young girl is thrown from a horse and Jan accompanies the patient there. The problem is that Dr. Coe and Dr. Dan are bitter enemies, and if Dr. Dan finds out that Jan is stopping by the Coe place to visit with little Debbie, who is paralyzed from the accident, she will lose her job.


After much asking around, Jan learns that Dr. Noel and Dr. Mavis had once been engaged. But Mavis had wanted a bigger and better clinic, and Dr. Dan had refused. She and Dan waged a tug of war over Noel, and neither won: Noel packed up for New York. So Mavis opened her fancy clinic across town, and it’s been a big success. The story is a bit confusing, but it seems that Noel had asked Mavis to wait a few years, for Dr. Dan to retire, before improving the Lester clinic. “All he’d asked for was a few years. All they had to do was wait, but Mavis wouldn’t,” Noel thinks. “She had always been ambitious, going hell bent toward her goals. … If Mavis had really loved him, nothing else would have mattered – neither the clinic nor her fantastic ambition. Mavis didn’t love him, never had and never would.”


There’s a lot wrong with Noel’s assessment, starting with the fact that Noel is mulling this over after he had gone to Mavis’ house before she had arrived home, let himself in with the spare key she keeps under the flowerpot, fought with her, grabbed her and kissed her against her will, and she had bitten him on the lip so hard it bled. Then one could ask why, of the affianced couple, it’s Mavis who ought to have given in. If Dan’s clinic is so clearly shabby and not meeting the needs of the population, why must a new facility that would improve local healthcare hinge solely on Dr. Dan’s whims? We could say that if Noel had loved Mavis, he would have chosen her over his father. This is the point of view taken by Jan: “There was too much respect for this woman doctor in her heart. She had seen how skilled she was, how much she cared about her patients. Perhaps she was ambitious. That was no crime. Perhaps she had wanted a nice building, a decent place to treat her patients. That was no crime either. Dr. Dan was wrong. Worst of all, he knew he was wrong and it ate at him like a burning infection.” But this exculpatory passage doesn’t let Mavis off the hook until the penultimate chapter, so for most of the story Mavis wears a scarlet MD.


Anyway, all that’s just the backstory. In the meantime, Jan has a monster crush on Noel, who is quite the hot tomato. “Noel Lester was one of the most attractive men she had ever seen. … To be involved romantically with a man that looked like this was probably the answer to most girls’ dreams.” So she hankers after Noel, but he mostly just toys with her, as it’s Mavis who owns his heart; Jan “was his ace in the hole,” thinks the lousy cad. For her part, Jan dates Noel, a frisky mountaineer called Buzz, and a reclusive writer next door named Damon. It’s a little peculiar to watch Jan and Noel bounce around, kissing everyone in sight despite their professed love for one person only. By the end of the book, the only person I really respect is Mavis.

The story concludes with Noel – once again – displaying his hydrozoan tendencies by decamping for New York, letting his father and Mavis know via a cowardly telegram. The wrench in his plans is the fact that his plane comes to earth a bit prematurely, in the mountains just outside of town. Does he survive? Will this tragedy bring peace at last to all the warring factions? Will Jan find herself a man? All these important questions are answered, of course, but you won’t be surprised by any of it, and you will care even less. And so my quest for a sublimely titled book that is actually worth reading continues.