He Married a Doctor 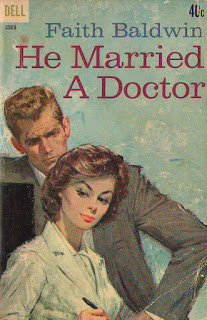 Carey Dennis had been in love once, deeply in love. Then he had been hurt, just as deeply. Once was enough. If he ever fell in love again, Carey told himself, it wouldn’t be with a woman like Hilda. A woman whose mind and hands had been highly trained, a woman whose heart was big enough to love all humanity—but perhaps not intimate enough to love a man.

BEST QUOTES:
“I might forgive you your profession if you were plain and wore your teeth on the outside and had mouse-colored hair in a bun. Or if you were the hearty collar-and-tie type.”

“How come you aren’t taking pulses somewhere instead of increasing them?”

“Kathy didn’t like women her own age, she loathed those who, like Hilda, were younger, but she was wonderful with any woman over fifty.”

“She was forbidden alcohol. Besides, she didn’t approve of the stuff, except medicinally. However, she had no objection to other people’s ruining their stomachs and brains, she said cheerfully, adding disparagingly that, as far as the brains went, few individuals had the type you’d miss, if ruined.”

“Possibly your aunt feels you might turn into one of these very modern, hideously efficient young women who scorn all masculine aid and protection. Perhaps she’d like to prevent it as it would reduce your chance of marriage.”

“If you married a woman you expected that you would be her job.”

“Most marriages are a compromise, an armed truce—men and women having been born natural enemies.”

“Confession may be good for the soul but it could raise merry hell with married life!”

“The bridegroom instinctively expects to be greeted on the threshold of the home by the palpitating bride crying, ‘Darling, I thought you were never coming, the day has been endless!’ ”

REVIEW:
Hilda Barrington is a doctor. Not just any old kind of doctor, though; she’s a very special kind of doctor. She’s a woman doctor, a “hen medic.” At 27, she has just finished her training and gone home to Waynefield, New York, to work alongside her aunt, Jane Redding, who is a general practitioner there. And a spinster, because being a woman and a doctor is difficult enough, but to add marriage into the mix is utterly impossible. Indeed, Hilda has decided she herself will never marry: “That problem hasn’t changed, no gadgets have solved it. I ought to marry and have a dozen … well, three or four. How can I? Someone would be hurt, someone neglected even. Unless I stopped practicing. And I won’t, she told herself fiercely, not for any man alive. I can’t.”

Then she meets this guy … Carey Dennis is 36 and has just moved to town. He’s very wealthy and recovering from a broken heart, as his fiancée, Maida, abruptly married a German baron, Franz von Kunst, which he learned about in the papers. Carey and Hilda get off to a spicy start with plenty of witty and insulting repartee. So we know where this is going. The problem with this book is that it gets there too fast, and indeed, as you might have guessed by the title, Hilda and Carey are married before we’re even halfway through. This takes some of the starch out of the book’s spine, as now the central question is not whether they will end up together but rather whether they will get divorced. It just doesn’t make for an entirely satisfying problem. (A little zest, however, comes from the fact that the couple actually has a sex life, which is demurely alluded to on occasion.)

The plot concerns the arrival of Maida and her new husband in town. It turns out that Maida doesn’t love Franz after all; it’s Carey she wants, again, despite the fact that he’s married now, and—oh, yeah—she is, too. So she plots and schemes, aided and abetted by Carey’s discontent with Hilda’s career and the arrival of World War II. Franz, being both German and dislikeable, is highly suspect, though we are advised several times that even if he is an ass that doesn’t necessarily make him a Nazi. (The Japanese cook, however, is not treated so gently after the bombing of Pearl Harbor; no sooner does the news come in over the radio than Carey turns to Hilda to say they must fire him. “I can’t look that little—” he begins, and Hilda agrees to do the job.) Hilda is always running out of parties when an emergency arises, missing dinner, and leaving the house in the middle of the night, and Maida is usually around to point this out to Carey, and then cry on his shoulder about how frightened she is of her husband.

If the love triangle is the skeleton on which the book hangs, its heart is the conflict of being a woman, a doctor, and a wife. The urgency and importance of this question is vastly exaggerated, when viewed through 21st-century lenses, but it’s not entirely foreign to the modern era. The situation is summarized in a scene in which Carey is obliged to help Hilda intubate a seven-year-old boy with diphtheria and is utterly horrified by the entire experience, and at the same time awed by Hilda’s skill and competence. This makes him, as “a mere man, feel degradingly inferior. No man likes that feeling. I’d rather you weren’t—so capable; I’d rather you screamed at spiders and sickened at snakes.” Her abilities, detrimental as they are, are made up for by the fact that she’s “a feminine woman. A woman.” And a good-looking one, at that. Then again, he wonders, “What would it be like to have such a woman in love with you and yet to know that you had a rival always, one stronger than yourself, which all her love for you could not deny?” It’s all right for him to have a career that keeps him out late, and some day there may be children who will supersede him a fair amount of the time, but that’s different.

Dr. Jane is another mirror on the question of being a woman doctor. Jane was a real pioneer in medicine, having been born in 1875 and attended medical school before the turn of the century. It’s regularly acknowledged that Jane has made greater sacrifices than, and opened the door wider for, Hilda and the other young women doctors. Jane also points out the differences in medicine in the 1900s compared to the 1940s—which sound true even today: “Sometimes it seems to me that we diagnose by gadget. Your grandfather could tell more about a heart by using his ear, a stethoscope and common sense than any machine ever invented. Use every new scientific aid—provided it’s been tested and proved—that you can lay your hands on, but don’t forget you have eyes and ears and common sense. All the rest is help, new knowledge and short cuts. But sometimes gadgets fail. They haven’t souls or hearts.”

Faith Baldwin is a wonderful writer, and starting with the first page I sighed happily when a hospital was described as “exclusively expensive or expensively exclusive,” at “a small, plump, dyed woman,” that Dr. Jane has “fine, square teeth, all of them her own.” Her characters are warm (well, most of them are), true, funny, and smart, people you wish you could hang out with for more than just 223 pages. The world she creates is relaxed, humorous, comfortable, and smart. She thinks about things, mulling them over through the course of the book, and if no easy answer is found, it makes for a much better book than arriving at some pat, facile truism with enough holes to make an excellent colander. The second half of the book is not its finest, but even with that flaw, Faith Baldwin handily outscores almost any other writer in the genre.
Posted by Susannah at 1:00 PM