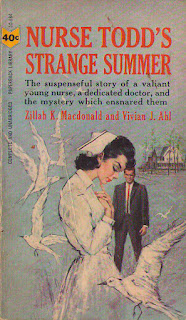 Nurse Ann Todd, on a special duty assignment on the misty coast of Maine, found two men … and a mystery. There was Quint Towne, who made her pulse thump though her heart said no … And there was Dr. Bruce McNab, brilliant and lonely, shunned by the people who needed him most, blamed for some strange tragedy no one would name. As Ann struggled in the web of hate and suspicion that enmeshed the town, the tension around her tightened its grip on her heart. Then, on the terrifying, gale-lashed waves of Jericho Bay, Ann found the answer to the mystery of Dr. McNab … and the key to her own future.

BEST QUOTES:
“He had neither flinched nor groaned. Like his state of Maine, there was granite in him.”


“He’s a kind of measles that gets every girl who runs into him.”

“Nurses are so bossy, you know.”

“She was not blind to the value of a married-woman status in her field. There was always the idea that unmarried women didn’t know the essentials of life.”

REVIEW:
Nurse Todd’s summer, despite what you may have heard, wasn’t that strange. Ann Todd left her job at a hospital in New York to work in Maine as a private nurse to Quint Towne, a wealthy gadabout whom she had nursed after he injured his back when he fell from a horse in Central Park. She’s fallen in love with him, and is looking forward to spending the summer assisting him through his rehab. But when she arrives in his summer hometown off Jericho Bay (which is just southwest of Bar Harbor and Acadia National Park, if you care to know), she is met by a postcard from Quint’s mother and constant companion, Jane, who informs her that they are in Florida and will not arrive in Maine for four more weeks.

Fortunately, the town has a doctor, Bruce McNab. Soon she is working for him, drawing blood, visiting patients around town, and helping during office hours. But she discovers that the town harbors a grudge against Dr. McNab, and most of the citizens prefer to drive to a town 20 miles away for their healthcare. She thinks this has something to do with her landlady, Lett, a talented pianist who suffered a broken wrist two years ago. Lett’s hand became paralyzed after the accident, and Lett’s career was ruined. The town believes Dr. McNab, who at the time was working as an intern under the town’s previous doctor, bungled the job, and still hasn’t forgiven him. Ann is determined to save Dr. McNab’s reputation, so she sneaks a look into the doctor’s files, but the first page of Lett’s chart is missing, and she can’t find out for sure what happened. Then she tries a little physical therapy on Lett, though Lett’s sister Parthie is dead set against it. (And get used to these names; everyone in Maine is named something like Keziah, Ephraim, Llewellyn, and Lucius, perhaps because it’s such a quaint place.)

Four weeks fly by, and Quint is back and doing splendidly, so Jane tells Ann they won’t be needing her services after all. Quint starts dating her, but he’s also seeing the local artist, Mallie, sometimes back-to-back on the same night, the cad. Soon summer rolls into fall, and Ann isn’t making much headway in her campaign on Dr. McNab’s behalf. Then a huge nor’easter blows up, and wouldn’t you just know it, a young woman living out on Hen Island has come down with appendicitis. She and Dr. McNab pack up their supplies and run through the storm to save the woman’s life with an appendectomy on the kitchen table, and suddenly she’s thinking that going back to New York is going to be really difficult, because “this was the life she would have chosen.” After watching her quiver with alarm prior to the operation—“She dreaded the storm, and she was afraid of another fear, one that came unbidden and of which she was ashamed, fear of gossip if he failed! His failure would reflect on her, too; she must face that because of her association with him!”—I’m a little perplexed by this sudden transformation.

Safely back on the mainland, Ann is met on the docks by Quint, who smooches her heartily and asks her to marry him. She briefly considers the proposal, despite having declared, just eight pages earlier, that “she was through with Quint.” The truth it that she’s falling for Dr. McNab, but since he has been spending a lot of time with Mallie, she thinks she might as well marry Quint, since “life had to be lived.” But she quickly snaps out of it and turns him down—and on their way off the dock they pass the doctor, who doesn’t even wave, to Ann’s great disappointment. He is decidedly cool after that, and spending more time than ever with Mallie, but Ann cannot connect the dots. Further evidence of her lack of sense is provided the next day at Dr. McNab’s office: A young patient bouncing on an antique sofa finds a crumpled chart in a hole in the upholstery that was pointed out to us with much fanfare 40 pages ago. Oblivious Ann takes the chart without looking at it and stuffs it into the pocket of her uniform. That night she finally reads it, realizes that is plainly shows that the previous doctor was the one who mishandled Lett’s fracture, and tucks it into the Book of Devotions that she sanctimoniously keeps on her bedside table, planning to wave it around town tomorrow to trumpet Dr. McNab’s innocence.

But then she wakes in the middle of the night by someone creeping into her room—it’s Parthie, looking quite mad and nervously twisting a scarf. She wants that chart! Ann thinks about how valuable the chart is, and how much she loves the doctor—and then promptly gives the game away by reaching for the book. Parthie gets there first, grabs the chart, and burns it to ashes. Her mission accomplished, she completely goes to pieces and confesses all: She’d done the old doctor’s books for him for years and had fallen in love with him, though he was married and had no interest in her. She had known that it was he who had botched her sister’s case, but she wanted to protect the old doctor, so she stole the chart, stuffed it into the sofa, and spread the rumor around town that Dr. McNab was responsible for the malpractice. Ann again tells Parthie that a little PT will have Lett banging out sonatas in no time flat, and this time Parthie agrees to allow Ann and Dr. McNab to treat Lett’s arm. And once she’s healed, Dr. McNab’s reputation will be saved!

All that is irrelevant, though, because in the morning, Dr. McNab gets a letter from one of the town’s leading citizens, who likes to vacation on Hen Island. He has been so impressed with Dr. McNab’s treatment of the woman with appendicitis, who is a dear friend of his, that he has invited Dr. McNab to serve on the local hospital medical board, thereby anointing him as a worthy medico. Then it’s just a few short sentences to engage Quint and Mallie, and drop Ann into the good doctor’s arms, and it’s all over.

And none too soon. Ann starts out well enough, but once Quint comes back to town, she transforms into one of the more immature heroines I’ve met. After she’s released from her job nursing Quint, she can’t bring herself to actually ask Dr. McNab to keep her on, just telling him that she’s going to have to go back to New York and, when he accepts the news with aplomb, she becomes angry that he doesn’t tell her he wants her to stay, when she can’t tell him that she wants to. She’s angry with Quint because he doesn’t take her to meet his socialite friends when they go out on dates, and decides she wants to stop seeing him. But before she can tell him this, he stops coming around: “Ann had wanted to break away from him and it had happened, but she knew now she had wanted the break to be on her own terms. She missed him.” He tells her he can’t see her because his mother doesn’t like it, and she controls his income. “Then why not get a job? she almost stormed, then remembered he was not in any condition to do that.” And her thoughts are much too frequently punctuated with exclamation points! “Ann knew both triumph and fear! Triumph that his diagnosis had been confirmed. Fear that they might be too late!” “And then, at five o’clock, the telephone did ring!” “Her courage zoomed up! They must not fail!”

The writing is otherwise bearable, but chapters are given titles, the first time I have seen this in a VNRN, and this offers an opportunity for a chuckle at chapter 15, named “Ann Shares a Fateful Moment with ‘B.M.’ ” (I’m trying to imagine that how that scene plays out.) One superlative feature of this book is its extremely descriptive depictions of medicine. We watch Ann make a bed with the patient in it, pack a mobile OR and set it up, and assist in an appendectomy, and these scenes are among the most realistic and detailed I’ve encountered in a VNRN. But apart from this, and the armchair-travel thrill of hearing mention of places you know of (if you know of Maine), you’re better off allowing Nurse Todd to navigate the northeast without you.
Posted by Susannah at 6:18 PM