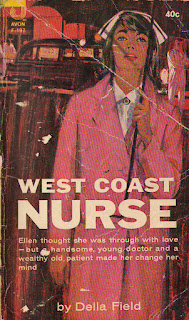 Ellen Mallory thought being on the Vista Shane staff was absolutely perfect. The small private hospital had excellent facilities and allowed nurses substantial time with each patient. But the arrival of Dr. David Chase posed a threat to Ellen’s emotionally disciplined way of life. The tension she felt in his presence disturbed her. It wasn’t fear. Or dislike. It was—and the realization stunned her—a very strong romantic attraction. She wanted to run—but where? Away from Vista Shane? From San Francisco? Or right into David Chase’s arms!

“Who wants a man in his hour of need?”

“It’s this career business that does it. As soon as a woman takes a full-time job, she ignores all her other responsibilities!”

“Nursing was the one career in which a woman could preserve her femininity.”

“Maybe we should send her to a psychiatrist. It’s the thing to do these days, you know.”

“She hated self-pity but could not help wishing that she had a man to cook for and prepare herself for.”

“He and I are opposed on certain things. He respects the uniform and not the woman underneath it, and I, as you so well know, hate the uniform but love what’s underneath.”

“Your crisp white uniform makes me nervous, you know.”

“People should gulp wine as if it was water. It’s good for the soul. I think I’ll begin to prescribe it as pre-operative sedative.”

“If you want to be sort of a masculine type, then go ahead. Get a job, make money to buy clothes for your own reflection in the mirror.”

REVIEW:
Ellen Mallory and her sister Katie live in a San Francisco apartment, on a hill in an Italian neighborhood with views of Marin Count. This probably puts them on Telegraph Hill, or maybe Russian Hill (and this is an important detail because I used to live on Telegraph Hill). Ellen works at a hospital 20 miles south of the city—maybe in San Mateo?—where she takes on a patient named Emilio Rafaeli, a very wealthy and prominent attorney in his late 60s who has stomach cancer. He’s crotchety and demanding, but in about two minutes she has him wrapped around her finger, and soon she adores him as well.

The Mallory sisters are orphans—their parents were killed in a plane crash four years ago—and though Ellen was already in nursing school when the tragedy occurred and so has her career to keep her anchored, Katie is drifting. She’s refusing to go to college, which is important to her future because “you simply must if you’re to find the right sort of man,” as her aunt tells her, adding, “One of the all-important things in marriage is equality. The woman just has to keep up with the man.” In her rebellion, Katie is hanging out with a boy named Toad and “a group of students who raced around on motorcycles, drank continually, and lived in rotten warehouses in the city. They all protested every form of conventional behavior, ascribing their own to terror of the atom bomb.” Ellen is naturally concerned about her sister, and so introduces her to Dr. Stephen Hull, a former boyfriend and now good friend. Naturally it’s love at first sight—but Katie’s not going to be pinned down so easily. In a last revolt against committing herself, she goes out partying with Toad and his pals, who are doing peyote. She refuses to take the drugs, but when the police swarm in, her beloved Toad slips the buttons into her pocket and she’s hauled off to jail on drug charges. When Ellen and Stephen show up to bail her out, a police officer is shouting the Katie has tried to slash her wrists with a nail file, so now instead of a prison cell, it’s a hospital bed she’s occupying.

Ellen, clearly, has a lot on her plate. To make matters worse, there’s this guy at the hospital, Dr. David Chase. From the first day they meet, “she dreaded working with him, dreaded his aloof manner, and she disliked him for treating her like a maid.” He’s a dark, brooding type, and it doesn’t help that she’s a cool efficient machine at work, even if she does go all to pieces when she gets behind her closed bedroom door. Whenever they’re in the same room, the sparks are flying, whether from anger or—could it be?—passion, it’s just so hard to tell how you feel about a guy, right? Until that moment when suddenly she “realized with a shock that she was in love with him.” Did anyone see that coming?

Unfortunately, Ellen is too constrained, and David is too restrained, and every time they meet it’s to say goodbye. He resigns from the hospital, so she stops running into him at the hospital. Then he shows up at a charity ball to see her, and after kissing her heartily, they glare at each other and he stomps off into the sunset. She thinks he’s gone to New York, but really he’s in Big Sur, and when they’re to be at the same dinner party, he sends her a letter telling her that his first thought was to back out of the party, but that’s too childish, so they will meet again, and could she please refrain from the intense sarcasm they’ve exchanged in previous encounters? Before she has the chance to compose a suitably caustic response, her patient suffers a relapse, and the only doctor available is Dr. Chase. He is “coolly efficient” and refuses to look at her—until he takes her in his arms and the book abruptly ends.

West Coast Nurse is an unusual, brooding book, different from the usual VNRN. Ellen is miserable in her life and in her inability to take chances. She loves David and suffers intensely from her inability to connect, both with him and the people around her. But despite numerous declarations that she’s really going to change this time, she still can’t bring herself to tell him how she feels. Even misguided Katie sees how stunted Ellen is, repeatedly advising her to talk to David: “Where’s the fight in you? You’re never going to get what you want unless you make the effort.” (Katie herself, after her trip to the hospital, has learned this lesson and traded in Toad for her prince, Stephen.) I was disappointed that the apparent reconciliation between Ellen and David, though it’s essentially played offstage, did not come about through any real growth in Ellen’s character: She’s still the emotionally timid person she was on the first page, and I’m not overly confident that this rapprochement is going to lead to a happy marriage, since David doesn’t seem to have changed any more than she has.

Another curiosity of the book is its double standard regarding working women. Stephen is insisting that Katie not work once they are married, and she actually breaks off their relationship over this point. He is the one who bends in the end, but Katie has no job and only sketchy plans to become a nurse; when she herself is in the hospital she tells Ellen and Stephen, “I hate this place. I can’t see how either of you can stand it.” When Ellen asks Katie if she’d rather live in the country with Stephen or in the city with a job and without Stephen, Katie without hesitation chooses Stephen and no job—and then after Stephen has given in to her, Katie tells Ellen that she and Stephen have decided to live in the country after they’re married, implying that she will not be working after all.

Stephen tells Katie, “Look at Ellen. Do you think she’s any better off for being a career woman? Is it making her happy?” But it’s not her job that makes Ellen unhappy; indeed, her close relationship with her patient is about the only thing that keeps her getting out of bed in the morning. (Katie actually calls Stephen on this, responding, “If anything, it’s men like you and David Chase that make her unhappy.”) Not to mention the fact that if it weren’t for her job, she and Katie would be indigent. So the choice between career and husband is not as simple as Stephen would have you believe.

This book is thoughtful, and the author clearly understands Ellen profoundly. It’s psychologically sophisticated; when most VNRNs will drop words like neurosis and mania as if they’re going out of style (oh, wait…), West Coast Nurse describes Ellen’s insecurities in a way that feels deeply true. I was fascinated to discover that the author of this book, Fanny Howe, is an important experimental poet who in 2009 received the Ruth Lilly Poetry Prize, which is given to a living American poet whose “lifetime accomplishments warrant extraordinary recognition.” This book, and her only other VNRN that I can find (Vietnam Nurse), were written when Howe was 23 and 26, respectively, years before her first collection of poetry was published in 1970. (Curiously, this book was published the same year she ended her marriage to Frederick Delafield (1963); her married surname clearly served as the foundation for her pen name.) So the fact that the book is well-written is not surprising, and I feel strangely proud to know that Ms. Howe went on to bigger and better things after leaving us with this remarkable little work.
Posted by Susannah at 11:46 PM