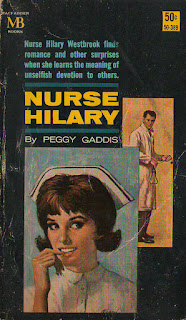 Doctor Stuart Marsden was too busy for love … until Hilary Westbrook, R.N. joined him in his uphill fight to better conditions for all the oldsters in the community. Then Doctor Marsden realized his efficient assistant was also a woman—and a lovely one!

BEST QUOTES:
“I wasn’t asking a question, Doctor, not of you. I wouldn’t dare, because you’re a doctor.”

“She distrusted men who were spectacularly good-looking.”

“From now on, nobody yells at me but you.”

REVIEW:
Some books I look forward to reviewing. For others, I barely know what there is to say. Nurse Hilary has been hired to work at what is essentially a hoity-toity assisted living facility. No one’s really sick at all; their “ills” come from loneliness, shyness, or nastiness. Nurse Hilary spends her time swooning over Dr. Stuart Marsden, who is a gerontologist and uses the facility to do his “research” into old people. What exactly he’s researching—do they prefer green Jell-O to red?—is never made clear, but apparently watching healthy old people play bingo and crochet is going to advance the field enormously. He’s got a bee in his bonnet, however, about an unused ward in the building. He feels this should be used for older people with actual health problems who can’t afford to pay the high cost of residence at the Senior Citizens Retirement Club. The SCRC administrator has a different opinion, of course; he feels that the underprivileged would bring down the tone of his swanky establishment. So they are at a bit of a stalemate over that one.

Enter Nurse Hilary, who goes manor a mano with the administrator shortly after hearing about the hunky doctor’s yen for the empty wards, and is tossed out of his office before she can finish her sentence. But she’s safely established herself as a feisty gal who will go to the mat for a cause she believes in, and boosted the good doctor’s opinion of her, so the endeavor wasn’t a total loss. Now there’s just a lot of pining—and even pitching petulant fits—until he starts to notice her, and tells her, “I love you—I think.” She smiles to herself, because “she was a little dazzled by the prospect of what the future must hold for them.” I’ve said it before, but honestly, if couples in the 1960s got married on as little a foundation as all the VNRN heroines, it’s a small wonder that the divorce rate is so high.

The only other things that happen in this book is that Hilary wrangles with the facility’s resident witch, Kate Keenan. The crone demands that either Hilary goes or she goes, and the entire population of geezers rises up, with help from their walkers, and tells “the Duchess” to hit the road. Hilary intervenes by seeking out Mrs. Keenan, working her miraculous healing powers on the woman’s shriveled soul, and transforming her overnight into a generous, gracious woman who will publicly apologize for insulting another resident and throw her a tea party to boot.

The only point in the book worth noticing is the curious attitude about two of the seniors who decide to get married. Shy Mrs. Lily-Mae Barton is starving in her room after her arrival because no one told her to come downstairs for dinner. Hilary saves the little mouse from a slow, unpleasant death by cluing her in to the location of the dining room, and as she steers Mrs. Barton in to lunch, she decides to kill two birds with one meal and plops Mrs. Barton down at a table with Jason Hodding, a lonely retired executive who always eats by himself. Love blossoms, and soon Lily-Mae blurts out in the dining room that Jason has proposed. Gales of laughter ensue, and even Hilary—who can tell Mrs. Keenan at her venom-spewing worst, “I want to be friends, because I like you”—can’t be completely happy for the couple: “Once, she might have thought there was something ridiculous in the love between two people in their seventies; not funny, not amusing, but faintly absurd. Mrs. Barton was sixty-nine, her chart showed; Mr. Hodding was seventy-three. Yet there has been a look in his eyes, as he had watched her, a tone in his voice when he had spoken to her, that people expected to see and to hear in the voices and eyes of youngsters. It was, Hilary thought, deeply touching—and more than a little sad.”

This geriatric romance is so shocking that the facility’s receptionist, who clearly thinks little of ethics or her paycheck, drops a dime to the local newspaper. Mrs. Barton’s family comes across the expose in the morning edition and goes ballistic: “The children are all just furious with me and so shocked to find I’d make such a fool of myself—and that I’d held the whole family up to ridicule—and they’re driving up to take me home!” quivers Mrs. Barton to Hilary. “Jill thinks it’s disgusting for us to want to get married at our age. She says that when she gets her hands on me, she’s going to paddle me good!” (Mrs. Keenan, who has by this time abandoned the dark side, quips, “That doesn’t sound as if they think you’re too old to get married; it sounds as if they think you’re too young!”) I can only surmise that the horror everyone seems to feel about this union stems from the unstated fact that, once safely inside the bonds of holy matrimony, these old people will probably be having sex!!! How disgusting!!!

This curiosity is clearly an accident of changing social mores, not any real talent on the part of the writer. Indeed, Ms. Gaddis had displayed little skill at all in penning this smidgen; reading it you may feel half asleep, as she apparently was when wrote it. She is capable of much better (and, it must be admitted, much worse), so I’ll overlook this little disappointment and move on.
Posted by Susannah at 12:30 PM

Email ThisBlogThis!Share to TwitterShare to FacebookShare to Pinterest
Labels: theme - healing the patient, theme - standing up for her beliefs