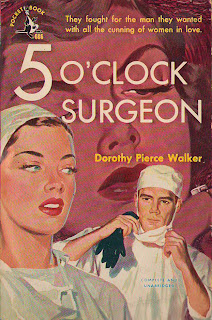 By Dorothy Pierce Walker, ©1948
Cover illustration by George Porter
Dr. Stephen Lovett glanced up from the patient on the operating table. “Take a message,” he said, turning to the medical student at his side. Presently the boy reappeared, grinning. “Miss Townsend wants to remind you that the cocktail party starts at five-thirty.” Young Doctor Stephen Lovett’s doctoring hours were from 9 to 5 … no more! His fiancée, Leslie Townsend, saw to that. But then Steve met the lovely nurse, Julie Greenwood. “A doctor’s first duty is to his patients,” she said. Steve had to make a choice. Was he going to be a doctor or a playboy?
GRADE: B
BEST QUOTES:
“Surgery fascinates me. I like to feel that I’m in on the miracles you men perform.”
“ ‘People don’t grow up until they’ve had some banging around,’ he observed.
‘Well, bang me around then,’ she replied. ‘I might like it.’ ”

“You could have benefited by a few more spankings in your extreme youth.”
“He didn’t envy the nurses on night duty. There was always that feeling that even the patients in good condition might pass out in their sleep or suddenly go berserk and jump out of windows.”
“I want you to meet Dr. Zeller, Owen. But don’t offer to shake hands with him. Both of his were broken by the Nazis.”
REVIEW:
Dr. Steve Lovett is a surgeon, natch, and engaged to the beautiful and wealthy Leslie Townsend. Her uncle owns an upscale medical clinic that Steve is angling to get into, though his family and friends try to talk him out of it, as apparently it’s more upstanding to be a solo practitioner. I guess the idea is that he’d always have to be sucking up to the older doctors and would never get to do any but the uninteresting cases they’ve tossed him. But this is what he wants—for the moment, anyway—just as for the moment he wants Leslie, who insists he be on time for the parties she throws for her rich friends. What’s a burst appendix when there are canapés and cold martinis to be had?
Curiously, Leslie, though at present a demanding, petulant shrew, has an interesting past: She used to drive ambulances in Burma during the war, which is where she met Steve. The scenes he gives us of her in wartime show a strong and brave woman, one who shoots a ten-foot-long snake when Steve and another soldier are too frozen with fear to draw their guns, who single-handedly rescues wounded paratroopers from the jungle and delivers them to Steve’s hospital, where she offers him quizzical looks when he assures her she won’t have to look at their mangled, bleeding bodies again. “She could take anything, she said, and subsequently he had found that to be true.” The old Leslie revives somewhat when she drives Steve and his scrub nurse, Julie Greenwood, to their Waterboro, Maine, hometown, which has been ravaged by a forest fire, getting them through the police blockade with aplomb—and then drops back to party-girl mode when Steve’s mother and Julie’s brother have been rescued, much to my chagrin. I’m not alone in that sentiment: “She did no real work of any kind, and it often seemed a pity to Steve, for Leslie had brains and talent.”
Julie Greenwood, on the other hand, is the apple-cheeked and dedicated scrub nurse. “She was the sort of scrub nurse a surgeon dreams about, he thought, but seldom is fortunate enough to work with. Her manner was quiet and unobtrusive; she didn’t chatter like some of the nurses; she was so absorbed in the operation that you had a feeling she could step in, if necessary, and help the surgeon do the job.” She has gumption, too; she fights with the mean new OR supervisor and breaks rules to help the surgeons do their work better.
﻿﻿﻿﻿﻿﻿﻿﻿

The book’s plot drifts amongst several characters in the hospital: Steve’s slimy roommate, who seeks out girls and financial opportunities with as much gusto as he attempts to shirk his duty; the lovelorn lab technician, who is jilted by Steve’s roommate; an orphan with a small bowel obstruction that Steve takes under his wing. These various stories don’t always come to any satisfying—or sometimes any actual—end; the roommate departs for Florida with a rich patient, having suffered exactly no repercussions for his rakish and irresponsible behavior; and even Leslie perfunctorily breaks up with Steve when he leaves her uncle’s dinner party to operate on the aforementioned orphan, never to be heard from again.
This is another one of those not-a-nurse-novel stories that has slipped into the pile, but the cover was so promising I could not resist. Truth be told, the cover seems to have been designed for a book other than the one that lies within it, possibly a more entertaining, campy, and amusing book. As it is, the book we have takes itself a bit too seriously. It’s not a bad story, and not badly written, and indeed approaches the charm of some of Faith Baldwin or Lucy Agnes Hancock’s books. It entertains in an easy fashion, with occasional wit, such as in, “She got her hand back from Owen and moved off down the corridor.” This book is easily worth reading, but it never really does anything with the characters or the story that sets it above the herd. If only it had lived up to the promise of its cover.
Posted by Susannah at 2:07 PM

Email ThisBlogThis!Share to TwitterShare to FacebookShare to Pinterest
Labels: not a nurse novel, theme - standing up for her beliefs