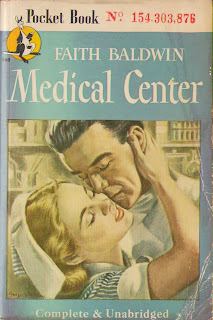 Hospitals, white, hygienic, and routined, hid behind their impersonal walls the perpetual struggle for life against death. They have an atmosphere of hushed mystery for most of us. But to those who live in them, doctors, patients, nurses, interns, and a host of others, life behind those walls is urgent and intimate, romance is sudden and strained, human emotions are tuned to the rhythm of birth and death and the intense dramas that lie between. In this many-charactered novel, Faith Baldwin takes you behind the scenes in one of New York’s oldest institutions. Here, among others, are Dr. Bullard, who considered money a sin; Jimmy Davenport, who fell in love with his nurse; Eunice Watson, who was too beautiful and too kind; the mysterious Mrs. Smith whose doctor had told her a big hospital was the best place to hide. Deftly the author brings alive a fascinating new world.

GRADE: B+
BEST QUOTES:
“Patricia to you. You don’t know me well enough to be formal.”
“As she dialed her number she read the penciled scrawlings on the walls and wondered that more people weren’t in the psychopathic wards.”
“Married men are either dull, misunderstood, or understood too well.”
“You have to have some worries, just to know that you were alive.”
“You look half dead, and dead doctors are bad diagnosticians.”
REVIEW:
This book is not a true VNRN; it’s a collection of six 60-page novelettes, each starring a different character from the Lister Memorial General Hospital on the West Side of Manhattan. As a fervent fan of the thoughtful, elegant prose in which author Faith Baldwin delivered District Nurse, He Married a Doctor, and Private Duty, I’d been hoarding this book as a pleasure postponed, and if this is not the finest of the quartet, it is easily worth reading, a soothing balm for an afternoon or two.
Dr. Peter McDonald is a renowned diagnostician, almost 40, a devout monk of a physician without time or inclination for a personal life. He’s haunted by his past: He’d fallen in love with a young nurse when he was an intern, but she had died after being misdiagnosed. His faithful office nurse, Lydia Owens, at 26 has worked for him for three years, but he sees her only as the quiet, reliable proficient that she is. Then one day he meets her sister, a 19-year-old train wreck of a nursing student who flirts with all the boys, seldom studies, stays out after curfew—and looks just exactly like Peter’s dead fiancée. You know exactly how this is going to play out, but part of Faith Baldwin’s genius is that you’re still caught up in it, still a bit worried until the final page.
The second story is the best of the lot, which is a bit too bad, since peaking so early in the book makes the other stories seem a bit faded. Pat Weston is an 18-year-old debutante who volunteers at the hospital’s free clinic because she wants to be a nurse, if only she can convince her horrified parents that a career is an acceptable alternative to being a society wife. Clinic doctor Steve Bullard condemns her for her wealth, of course, but she is too snappy to be put down by him. “The sight of a pretty girl—a girl with more than she needs to eat—sitting there at a little desk in the midst of all that misery made my blood boil,” he says by way of a backhanded apology. “She said calmly, ‘It’s nice of you to think I’m pretty.’ ” This subtle, wry wit permeates almost everything Pat says, and this story, too, ends as it should, but with a twist worthy of Pat’s character.
And there are four more. The dietician, Eva Reynolds, is pursued doggedly by the trifling society playboy patient and the solid intern but is interested in neither of them until the intern’s ex-fiancée shows up and tries to reel in them both. Charge nurse Ada Nelson is beaten down by the early loss of her husband and baby, but in caring for the women and babies on the maternity ward comes to realize “that in giving herself once more to an intensely personal life she would find her salvation.” Intern Dick Henderson becomes interested in his patient, Elsie Gordon—and then realizes that her aunt, Linde von Hartwig, was the governess to the family next door to him, more than a decade his senior, whom he had fallen desperately in love with as a 15-year-old boy. Nurse Eunice Watson is sent to special a young boy at home and finds that the wife is a closet alcoholic, desperately unhappy and probably bipolar (though of course they don’t call it that in these novels), and that she is in love with the father and the boy.
Only one of these stories does not have the traditional VNRN ending, and I did wonder that Ms. Baldwin didn’t shake things up a bit more, since the number of stories she included in this volume gave her room to exercise some unconventional options. But all save the narrative of Dr. Dick Henderson is satisfying in itself, traditional conclusions or not, and I wouldn’t have them any other way. One of the book’s nicer small touches is that the characters from one story appear in the others, even if it’s just a quick hello across a crowded cafeteria, creating a feeling of intertwined lives and professional roles as they are in the community of a hospital. I’ve already loudly praised Faith Baldwin’s writing in the reviews of her other three nurse novels, so I won’t go on too much now, but here she gives us the same sweet, steady hand we’ve known elsewhere, though she doesn’t seem to have worked as hard as she has on previous books, the sole exception being the story of Pat Weston. Medical Center appears to be the last of her nurse novels, I am heartbroken to say, but if you know of another, contact me immediately, and I will dry my tears until the sad day I have closed the cover of that one, too.
Posted by Susannah at 4:56 PM