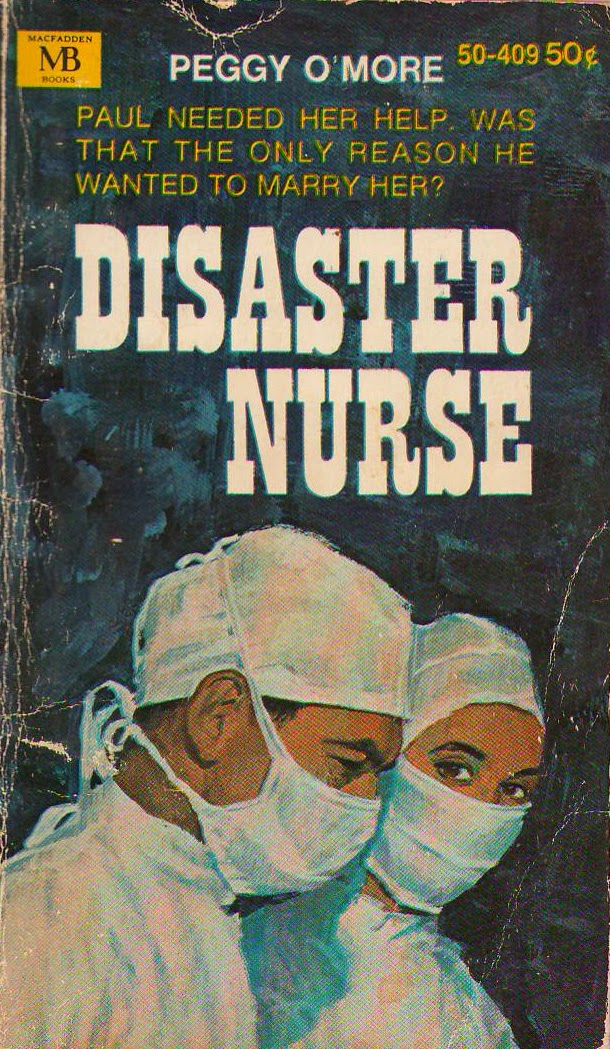 Mina Anne was troubled. She had loved Paul ever since the accident that had brought him to Cutler Hospital. But—one thought turned her days into torment. How could she love a man and still despise his outlook on life? How could she marry a man who so violently disapproved of the job she was doing?

“Put two girls and a can opener in the kitchen, and you have a feast.”
“For a physician, you are really very uninformed in a certain field of diagnosis.”
REVIEW:
Mina Anne Richards is, in addition to one of the more awkwardly named VNRN heroines I’ve met, a public health nurse. She’s concerned about a population of migrant workers who are living without basic plumbing or running water, and now they’re about to be evicted from their squatting grounds, apparently because “the camp was a veritable breeding ground for communicable diseases.” You could say the same about hospitals and elementary schools, but whatever.
Mina Anne’s boyfriend, attorney C. Paul Parker, is pressing her to give up her job and marry him, but she’s not completely convinced. Paul is particularly earnest in his proposal because the president of a large company will give Paul’s firm his business but only if Paul marries Mr. Chalder’s daughter—a very peculiar arrangement in a number of ways—and Paul will be off the hook if he’s already married, he explains to Mina Anne. When she objects, he responds, “Once we’re married, I’ll be able to show you where your perspective is out of focus.” Curiously, Mina Anne neither flings a skillet at his head nor shoves him out the door, but continues to consider, no matter how tepidly, his proposal.
The book gives us a lot of back-and-forth between Mina Anne and Paul, and even some mildly interesting if dated debates about welfare—one poor family with only one pair of shoes between the two children refuses to accept welfare, and Mina Anne debates whether this is admirable or “false pride.” A casual dinner or two with Dr. Louis Marquand, her boss, and then, at the book’s halfway point, it begins to snow. When Mina Anne and her roommate Joan, trapped indoors for several days by the blizzard, begin to snap at each other, wise medico Mina Anne chalks it up to dehydration: “The department warned us of the possibility.”
But then, even worse, the weather warms, and now it’s raining. And raining. The river is rising, and Mina Anne sets out in her galoshes and mackintosh to rescue, well, pretty much everyone: a man with an infected cut on his arm, a farmer and his family, a cattle rancher and his family, the entire migrant camp, a woman having a baby, a family trapped in a grove of trees, Paul’s parents. Just when you think we’re going to have a minute for a sandwich and a nap, someone is tapping on Mina Anne’s shoulder again and she’s off in the chopper with Dr. Louie. Sixty-plus long pages later, it’s finally over, and suddenly Paul has fallen madly for roommate Joan, whose “love would be an ever-burning searchlight on the roiled waters.” Even worse, a marginal character takes Mina Anne in his arms out of nowhere, and she agrees to allow him “to take care of her, not let her take care of him,” if you think you can take it.
Peggy O’More Blocklinger, whose work we have seen before under the pen name Jeanne Bowman, is not my favorite author, which should not surprise the regulars. In Disaster Nurse, she manages to do a little better than usual, which is still, clearly, not all that great. Her condescending psychobabble is slightly less prevalent, but we’re regularly treated to bon mots such as, “Premonitions are usually based on logical deductions distorted by emotions,” “Paul’s poverty was restricted vision,” and “This time I am thinking of our state inventory tax, of merchants buying heavily for the Christmas trade and being stuck with merchandise and having to pay taxes on what the weather kept them from selling.”
O’More’s main theme about poor migrant workers could hold some interest, but instead of making her points by showing them through her story, she hectors us with long pedantic lectures. When Joan ponders why the migrant families don’t take more pride in their admittedly temporary homes, instead letting them get so run down, Mina Anne climbs up on her soapbox: “I think it is an inner rebellion at their status. They can’t pinpoint the cause; it’s too ephemeral, ever-changing. So they rebel against their fellow man.” Then Joan jumps on the bandwagon: “They believe not: ‘The world owes me a living’ but rather, ‘The world owes me the right to earn a living.’ And when they can’t earn it, they don’t blame an impersonal escalating automation coinciding with population explosion; they blame those who have managed to maintain at least the appearance of economic stability.” Thanks, Professors, for elucidating these contemporary sociopychological tensions. I feel so much better now.
I’ve never met a Peggy O’More book I could recommend—unless it was so catastrophically bad that it could be worth a peek, like slowing down when you drive past a car accident (I’m looking at you, Conflict for Nurse Elsa). This book is neither good nor bad enough to bother with, however, so you’re best leaving this disaster to fend for itself.
Posted by Susannah at 9:03 AM

Email ThisBlogThis!Share to TwitterShare to FacebookShare to Pinterest
Labels: flood, theme - standing up for her beliefs