Nurse against the Town 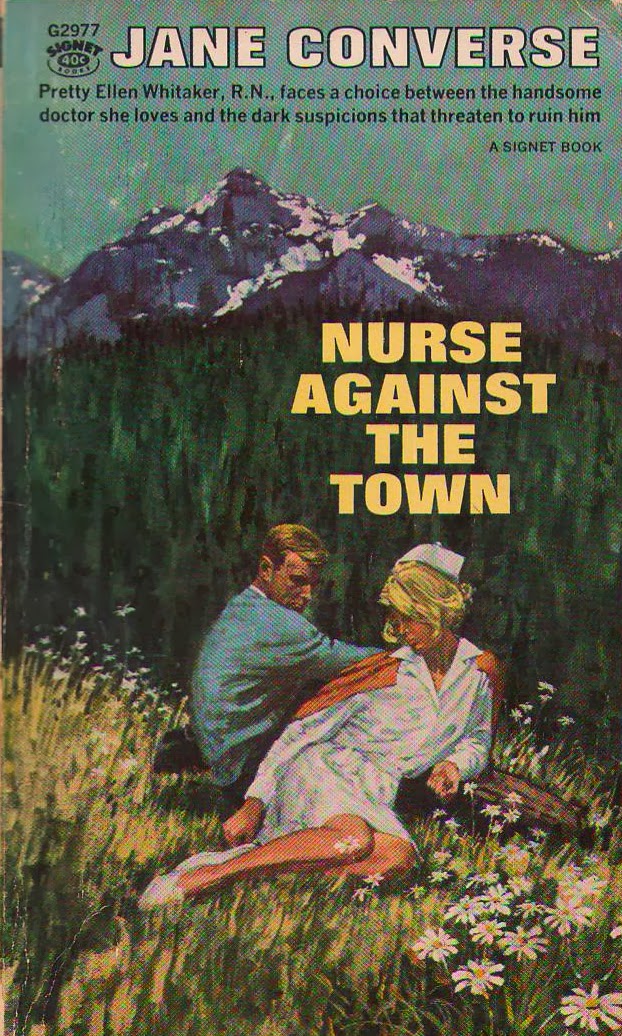 (pseud. Adele Kay Maritano), ©1966
“Murderer” they whispered of the man she loved. Why did the people of Barfield avoid their doctor? Why did they whisper “criminal” about its director, Dr. Jerry Sterling, when they talked of the mysterious death of his beautiful wife, Naomi? And what was driving Naomi’s brother, Henry Barfield, to use his membership on the hospital board to ruin Dr. Sterling? Desperately, pretty Ellen struggled to find the answers. Pitted against her consuming love for Jerry Sterling were the hostility of the neighbors and the terrible suspicious she could not shake free from her own mind. In a story shaken with passion, hiding at its heart a dreadful secret, Ellen Whitaker finds herself all but alone as the nurse against the town.
GRADE: D+
BEST QUOTES:
“Ellen’s mind had posed the awesome questions about Jerry Sterling’s innocence. Her heart answered them.”
REVIEW:
Ellen Whitaker has left her post in Chicago and come back to Barfield, Colorado, her home town, for one simple reason: She is desperately in love with Dr. Jerry Sterling. She knew him when she was just a kid, see—though “the senior class president and undisputed scholastic leader at Barfield High had barely known of a shy, chestnut-haired freshman’s existence”—and was so besotted even then that “his decision to become a doctor had spurred Ellen’s desire to become a nurse.” When he went off to college, she had “lived” for holidays when she might catch “only surreptitious glances” of him—and then she saw nothing at all of him until now, eight years later. Her devotion to Dr. Sterling is held up as an admirable thing, but to me it seems like a very unhealthy obsession.
In the interim, Dr. Sterling married beautiful heiress Naomi Barfield, but she was found dead in a ditch a year later, victim of “an illegal operation,” wink, wink. It’s rumored that she ran around with a lot of men and that Dr. Sterling tried to end her pregnancy but botched the job. Never mind that he has an airtight alibi for the time of death, the locals won’t have anything to do with him or the hospital he runs in town, so it’s uninhabited pretty much all the time. Naturally, Ellen feels this is an opportunity that she should jump into: working at an empty hospital hoping to catch glimpses of Dr. Sterling, who, widower for a year as the book opens, might begin to start looking around any minute now. But since he really only passes her in the hall every now and then, it’s not clear why he might opt for her. While she’s waiting for him to notice her, she befriends Dr. Sterling’s best friend, Porter Hubbard, and they even start dating, though she’s made it clear to him that her heart lies elsewhere.
All this is set up by page 20, and the rest of the book is an endless back-and-forth between Porter and Ellen about how they can help Dr. Sterling and whether Porter can convince Ellen to marry him. Eventually a Dark Secret is brought to light, but it doesn’t really change anything: We still don’t know who killed Naomi. Or actually, we probably do: We find out about an old doctor who had made a small practice of giving abortions, and who had committed suicide “right after that awful thing with Naomi.” But we’ve been aware of him since about midway through the book, so if he’s the killer, neither we nor the townspeople of Barfield should be at all surprised. We don’t know who the father of Naomi’s baby is, nor are we likely to, since it is common knowledge that she slept with pretty much every man in town. Yet, somehow, Dr. Sterling’s reputation is restored, and somehow manages to fall into Ellen’s arms at the end.
After Surf Safari Nurse, brilliant in so many ways, I will cut Jane Converse a lot of slack, but this is a phoned-in job, not worthy of her. Nothing happens throughout the book, the “climax” is actually irrelevant to the plot, and Dr. Sterling is such a complete stranger to both us and to Ellen that her infatuation with him is more than a little creepy. The writing is pleasant, as Jane Converse usually is, but it takes more than good sentences to make for a good story, and Nurse against the Town is anything but that.
Posted by Susannah at 1:13 PM