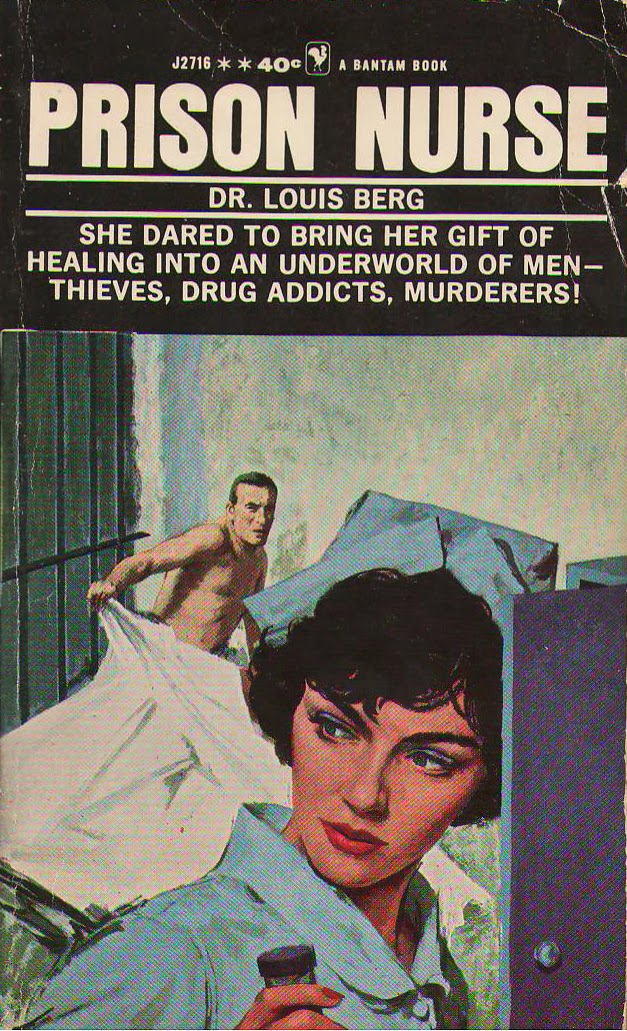 Young Dr. Evan Dale was in prison, paying society’s just price for transgressing its commandments. This courageous outlaw was the man Judy Grayson loved, but when his life hung in the balance, the only person she could turn to was powerful, ambitious Dr. Hartmann, who wanted Judy for himself. Dr. Louis Berg, out of his years of experience as a prison psychiatrist, has written this frank and shocking story of actual life in the twilight world of men stripped of everything but their primitive desires—and of the lovely girl who came to live among them.
GRADE: C+
BEST QUOTES:
“Between fighting off internes who made passes at her in the ward kitchen, evading the attentions of elderly patients with Romeo complexes and parrying the advances of the attending staff, Judy became a nurse and a woman of the world at one and the same time.”
REVIEW:
Judy Grayson’s first job out of nursing school is at the local prison, where she works with Dr. Jack Stewart, the overseeing surgeon, whom she knows from the hospital where she trained. Jack is in love with Judy and wants to marry her, of course, but Judy does not reciprocate Jack’s feelings, even if Jack is a handy guy to have around to take Judy to dinner and out dancing. She is a bit horrified by Jack’s reason for wanting to practice medicine in the prison: “That place is a surgeon’s paradise,” he tells her. “I can get more surgical experience there in one month than I could in six at Medical Center.” She calls this attitude “cold-blooded,” but I find it more practical and, in fact, true; just because you are interested in acquiring experience and seeing unusual cases doesn’t preclude you from providing good healthcare, as Jack is demonstrated to do at the prison on more than one occasion.
In fact, the resident who is supposed to be on call to the prison, Dr. Gustav Hartmann, is really the abomination. He shows up drunk at the clinic, never comes when paged, fails to order life-saving medications despite repeated requests, and is skimming pain medication out of the clinic to sell to Red Mike, the inmate with the warden’s ear. (Dr. Hartmann does not, however, demonstrate any designs on Judy, despite the promises made by the back cover blurb, above.)
Red Mike and his gang have occupied the dormitory that gives onto the hospital ward and is supposed to be reserved for young patients, to protect them from the “wolves” in the general population before they are transferred to the “farm.” There they sleep between linen sheets, dine on steak and wine, and stroll through the hospital—indeed, even the entire prison—at will. If you can believe it, Judy even encounters Red Mike in the city hospital one day, where he has gone on leave to visit a sick friend. Red Mike is so thoroughly in charge of the prison that he even has a hand in Judy’s hiring, telling the warden, “It ain’t often that we get a nifty piece of fluff like that around here, and I’m sorta sizin’ her up for myself. I need a relief from ‘fags.’ You understand now, don’t you? She’s my stuff.” He pays for his luxurious life by selling drugs and whiskey to inmates, and by skimming off prison supplies for the warden’s own fencing business, so there’s no use complaining about the shocking goings-on to the warden, as Judy quickly finds out!
Her ally in all of this is Dr. Evan Dale, who is six months into a three-year sentence for having performed an illegal abortion on a family friend who was going to kill herself if she had to carry the baby to term. So while the book wants us to feel horrified by the concept of abortion, Judy firmly believes that Dr. Dale was justified in performing this one and should not be imprisoned for a “pardonable mistake.” Frequently people who are opposed to something in theory don’t have such a hard time with it when it applies to them personally. Dr. Dale is the “inmate nurse,” and spends his days doing the work that Dr. Hartmann should be doing if he weren’t sleeping off his latest bender. So Dr. Dale spends a lot of time with Judy, and proves his worth early on when she swoons after delivering morphine injections to the prison’s addicts (don’t ask), and he catches her before she drops to the cold, stone floor.
The bulk of the book follows the fates of various inmates, Dr. Dale and Judy’s blossoming romance, and Red Mike’s “sizin’ up” of Judy. It ends fairly predictably, though the prison is allowed to plod along in its corrupt and sinful ways at book’s end. I was quite surprised to find the copyright date of 1934 on this book, which makes it one of the oldest VNRNs I’ve met. It certainly is dated, with its cute slang—can, fish, scratch, wise—all hung with apostrophes like ornaments on a Christmas tree. The nicknames are adorable too: Wouldn’t you like to hang out with Cabaret Lou, Broadway Rose, Frankie the Dope, Tough Tony, Three Ball Johnny, and Ice Wagon Reilly? The book is not badly written, but I think most of its excitement is supposed to be in the drug use and homosexuality, which we are supposed to find “shocking” and even, to quote our heroine Judy Grayson, “disgusting.” At this point in time, however, it all seems fairly straightforward, so unless you’re particularly interested at a look at prisons as they were 80 years ago, this book doesn’t have much to offer.
Posted by Susannah at 10:16 AM

Email ThisBlogThis!Share to TwitterShare to FacebookShare to Pinterest
Labels: abortion, prison, theme - standing up for her beliefs