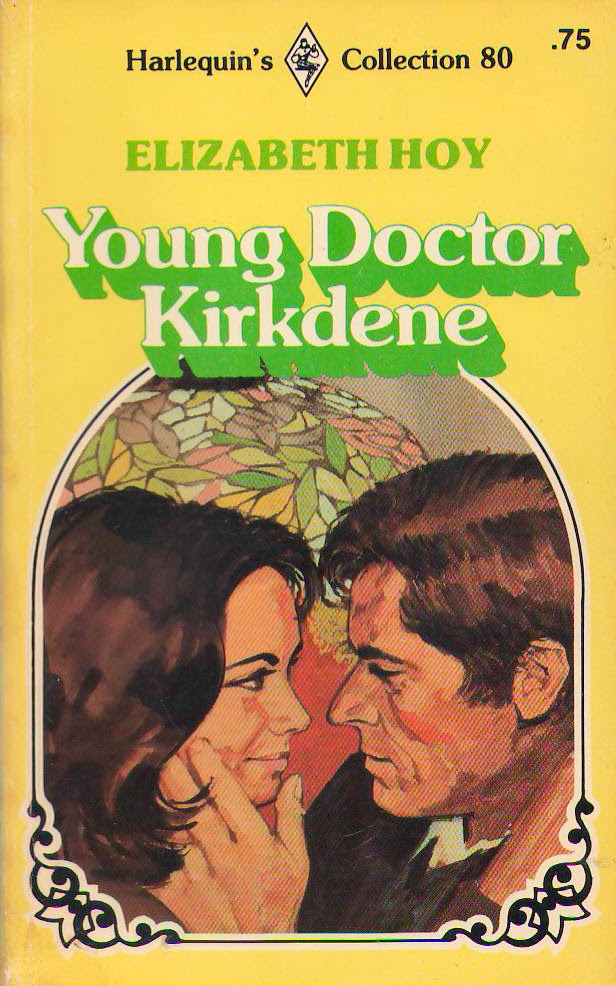 Doctor Kirkdene had made it quite plain that as a rising young medic he considered domestic entanglements and distractions as hindrances. But Nurse Lindy couldn’t help hoping that in spite of all his theorizing he would eventually come to love her!
GRADE: B+
BEST QUOTES:
“You mean, you actually make beds, wash patients, do dreadful terrifying dressings, watch gory operations without fainting?”
“Career women ought to marry docile men—otherwise they are heading for disaster.”
REVIEW:
Nurse Anne Linden—Lindy throughout this book—is hopelessly in love with Dr. Kirkdene, who has no first name and is just known as Kirk. But the man, gorgeous and self-confident, is a shameless cad: “His conquests were legion; hearts fell before him like nine-pins.” But one night Lindy, off in a back room for a sanctioned nap while on night duty (and how I wish such a humane break were more widespread), is followed by the flirtatious Kirk. No sooner has he planted a wet one on her when the door flings open and the night supervisor catches them in the clinch. As if that isn’t bad enough, word gets out that Kirk has left his post in the ED, and when an emergency came in, the nurse there was unable to find him and the patient survived only through her quick thinking.
With the two of them about to be tossed not just out on the street but to the metaphoric wolves, Kirk does what any enterprising, ambitious young man would do in similar circumstances: He lies, telling the head of the hospital that he had just proposed to Lindy when they were discovered. This makes everything all right and saves them both—but now they have to pretend they’re engaged.
And pretend they do, through an extensive 192 pages. Lindy is angry at the sham, secretly wishing it were real, watching Kirk with alternating fury at his coldly shameless ambition to nail a post at a new pediatrics ward and reverential awe at his complete and selfless devotion to his patients, to the point that he risks his career to help them. There are a few side plots, but this is essentially the book in a nutshell. It may seem simple—in truth, it is—but Elizabeth Hoy is enough of a storyteller to make this little story worth reading.
After Elizabeth Hoy’s outstanding Nurse Tennant, I went shopping for more of her books. Young Doctor Kirkdene does not live up to its superlative sister, but it’s certainly better than the other title I found, Doctor Garth. The writing is easy and charming, with occasional pretty phrases like, “Sensibly she reminded herself of these things, while her singing heart went its own wild way.” And few VNRN writers can make you feel so acutely the wretchedness of a young woman pining over an unrequited love—she pulls me back to miseries I haven’t experienced since high school. It must be admitted that the length of this book does get a bit tedious, and I found myself wishing the miserable pair could just have one honest conversation and put a quick end to it—indeed, the end, when that finally does occur, was a bit of a letdown. But all things considered, this is a rarity among VNRNs, a novel that actually hurts, and so I happily suggest you make an appointment at your earliest convenience with Young Doctor Kirkdene.
Posted by Susannah at 10:33 AM