A Nurse Is Born 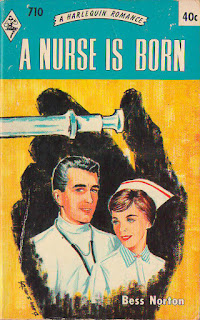 For a long time Candida Jones had set her heart on becoming a nurse. But her parents were on the other side of the world, and she had a hard time persuading her uncle and aunt to allow her to start training. It was a hard life for a girl, her uncle reminded her, unless she had a real vocation for it. However, Candida eventually received their consent to train at the local hospital near their Welsh Valley home. And sure enough, Candida turned out to be a born nurse, and found nursing even more rewarding, exciting, and—with the advent of Doctor Randon Lord—more romantic, than she had ever imagined.

BEST QUOTES:
“He must surely be a surgeon, with those slim, strong fingers.”

“Kindly do not giggle. A most unpleasant habit in a nurse. Indicative of a light mind.”

“I never knew such a girl for minutely studying the movements of every male creature on her horizon.”

“If you’re a very good girl, and get full marks for anatomy, I’ll give you a lift.”

REVIEW:
“That’s got to be a pretty dull book,” my son quipped, “while you wait for her to grow up and go to nursing school.” Fortunately, the title refers to a metaphorical birth, so we miss watching Candida Jones wean off diapers and trundle her way through high school. She’s still only 19 when we meet her, though, parking her scooter outside the hospital to stare at the man who spends a lot of time in the rose garden, on whom she has developed a painful crush despite the fact that she’s never so much as said hello to him.

She meets him soon enough, though, when she enrolls in the hospital’s nursing school. He’s Dr. Randon Lord, who is developing an anticoagulant drug made from the extracts of roses and rhododendrons. He pretty quickly appreciates Candida, too, but of course there are the usual who-likes-whom tangles to sort out. Here we actually have three intertwined messes, with Candida’s cousin and a classmate also in the mix. Plus all the usual shenanigans like a rock slide trapping one couple in a cave that only Candida can find, the dormitory catching on fire and Candida getting burned rescuing her classmates, and her parents going missing on a plane trip in Brazil—not to mention the many patient stories to round out the book as well.

Making it more interesting is that this is the first VNRN I’ve read that’s set in Wales, so we get to do some armchair travelling and meet people whose names contain only consonants (Twm) or who are suffixed with their occupations or hometowns (Robert Pugh, forestry; Margery Hughes, Pennal), and struggle with place names like Eglwysfach and Llwynau—what a relief when you’re only going to Cardiff!

The story trots interestingly along, for the most part, although Candida’s romance with Ran does unfortunately indulge in some overwrought crises—you do have to nod in agreement when a friend of Candida’s tells her, “You’re quite a girl for building fences so that you can climb over them, aren’t you?” Also, it feels a little creepy to me in that, though we are never told Ran’s age, he  must be at least ten years her superior, if not more, as he is superintendent of the hospital, not to mention a doctor with a prestigious research lab, stuff you don’t get your first year out of med school. And if the writing style is not especially witty or campy, overall it’s an appealing read, if not especially special.