Nurse with the Red-Gold Hair 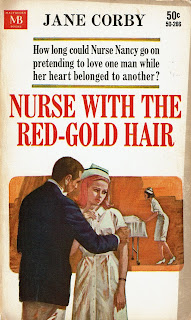 She knew how to deal with the drama of life and death … but Nurse Nancy Rogers had to learn how to control her emotions when Scott Lathrop walked into her life. After all, she was engaged to Dr. Ty Abbott—and besides, Scott seemed more interested in his work than in her. She knew she couldn’t go on hiding her feelings forever. It wasn’t fair to herself—or her fiancé. But how was she going to make Scott see that love was just as important to his life as his work?

BEST QUOTES:
“Perhaps a cheery word or a pat on the hand was not prescribed for patients, but Nancy knew they often helped. A word of encouragement when a woman was combing her hair or a suggestion that she might arrange it in a more becoming fashion always gave the patient a lift.”

“Darling! What an ungodly hour for you to look so crisp and efficient!”

“She carefully fed one of the heart patients her evening meal; the woman was not allowed to lift even a cup of tea to her lips.”

REVIEW:
Poor Nurse Nancy Blake Rogers. Life has been so cruel, endowing her with a mouthful of a name and bipolar hair, which seems to be all anyone can remember about her; almost every patient “chose to forget her name” and instead calls her “Goldilocks” or “red-headed spitfire” or, even worse, “the nurse with the red-gold hair.”

From outward appearances, she is managing her own life and career quite well. An orphan, natch, she sold the rambling family mansion when her mother died and bought a six-room ranch, which she shares with her aging housekeeper, whom she can’t let go even if the old woman is slowing down; to accommodate her, Nancy packs away the sterling and the Haviland and opts for stainless steel cutlery and cheap dishes.

Of course, Nancy has a steady boyfriend, resident Tyrone Abbott, who “roused the maternal instinct in every woman who knew him. Nancy could not fight down the impulse she had, on sight, to pat down his unruly cowlick or ask him if he had remembered to drink his milk.” Ty is clearly doomed.

But Nancy is in fact kind of a pushover. When cousin Joyce, whose “whole world crashed when her parents were killed in that airplane accident,” arrives to stay at Nancy’s house in the middle of the night with two cars full of rowdies intent on an all-night party, Nancy curiously allows all these hoodlums in. For hours she feeds them chips, dip, soft drinks, and all her milk until her “smoldering resentment” finally gets the best of her and she throws them all out at 1:00 am, since she has to be at work at 7:00—and the next day she plans to apologize to Joyce “for her sharp remarks.”

Enter the rocks upon which the ship of their relations will founder: Scott Lathrop, engineer and friend of Joyce’s who has just accepted a job at the Glenville electronics plant, where he will be doing “experimental work” with “violent reactors.” As Joyce continues in the role of ungrateful, bitchy houseguest, slowly commandeering Ty’s free time, that’s just fine with Nancy, who, at Ty’s 26th birthday party, no less, is literally swept away by Scott to the ubiquitous terrace that no self-respecting dance floor would live without. Some time later they return to the party, she looking “like a girl who has been quite thoroughly kissed,” but her enthusiasm dampens when Joyce cattily reveals that Scott was fired from his last job.

While we wait for Scott to explain this shocking blot on his character, we go to work at the hospital and learn about diabetes, a disease which Nancy, despite years of experience, doesn't know much about. Dr Mason, who believes that “most bodily ailments come from some malfunction of a gland,” lectures us that most diabetics, by the time of their diagnosis, are admitted to the hospital in a coma and die. Nancy also brings home a boy of five who goes into convulsions every time he sees his mother, when the woman herself is admitted to the hospital for appendicitis and the six children are packed off to foster homes despite the fact that their father is unemployed and so is home all day with nothing to do.

In the meantime, Nancy is giving Scott what passes in VNRNs for the cold shoulder. When he drops by to ask her for a date, she tells him that although she would love to go out with him, this darned flu epidemic has her working double shifts seven days a week, so she can’t tell him when exactly she will be free. The highly perceptive young man understands this exactly as it was intended and stomps off in a huff.

So what else is there to do while she is snubbing the man she loves? Well, go on a picnic with Ty and have “a scuffle” with him under the trees during which “the hot dog was dropped into the dirt and lay for a while unheeded.” (These VNRN euphemisms are absolutely divine!) Further, the duplicitous cat becomes irritated and depressed when Ty talks as if he’d “had a heart-to-heart with her cousin.” She has Ty drive her to their usual “parking” spot and returns his fraternity pin, slipping it into the pocket of his beach parka, a garment I am trying very hard to imagine.

Next, Scott rescues a woman from a burning building and is marginally injured, laid up for a total of two weeks, but Nancy is enlisted to care for him. As her strange romance with Scott gets back on track, she decides to drive to New York to pick up the very latest book on electronics for him—and bizarrely brings Ty with her on a date, although “she did not feel the excited anticipation she had known on previous dates.” Then she refers to Scott as “nothing more than a friend,” despite the fact that the two are quoting Romeo and Juliet’s balcony scene to each other. During her outing with Ty, he proposes behind a screen of potted palms, and she gently turns him down. She decides Scott does not love her based on her own weird twisting of events: She thinks Scott lied to her at their first meeting about why he came to town, and because he has referred to his two weeks stuck at home as a prison, this means he does not care for her.

Then the boy she’s taken in runs away, and after a frightening night in which she and Scott sit up and snap at each other, the boy is found by police and taken to the hospital. There he undergoes a glorious reunion with his dear mother, suddenly transformed into a caring, doting woman even though she never once visited her son in Nancy’s home and—even worse!—“never attempted to keep house; not even a shred of curtain hung at the dirty windows.” This miraculous revision occurs apparently because her husband has finally gotten a job, so “it looks as if they’re going to be a happy family now.” With the boy out of Nancy’s house, all it takes for Scott to surprise Nancy on her porch after she gets home from work to propose, the romantic fool, and we can wrap up the nurse with the red-gold hair.

The writing isn’t terrible, but Nancy is bewildering, managing her career and patients with aplomb while blundering her personal life with self-delusion of monumental proportions and a complete inability to express even her strongest feelings. Displaying less personal growth than her shallow cousin Joyce, who eventually decides that the boring guy who’s desperately in love with her is the one she really loves too, Nancy should really stick to being a nurse with no name. Clearly as a human being—certainly as a married one with yet one more name for her collection—I can’t see how she is going to be very successful.