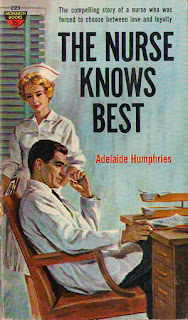 Nurse Ellen Copeland suddenly found three men in her life:
Tom Spendler, her boy friend since high school, who was demanding she set a date for their wedding.
Paul Dixon, once a brilliant author and now dangerously close to suicide, who needed her to help him write again and to restore his faith in women and in love.
Dr. Eric Hendricks, attractive, young psychiatrist and the man Ellen was in love with. Only he seemed more interested in his work than in her.
What should she do about these three men? She had to come to a decision. Should she marry Tom out of loyalty? Should she sacrifice herself to Paul because he desperately needed her? Or was there some way for her to make Eric see her as a woman and not just as his nurse?

BEST QUOTES:
“This younger generation—well, there simply was no accounting for some of the things they would do, at least from what one read and saw going on. Driving souped-up cars, smoking marijuana, drinking and boldly making love in public places, getting divorces almost before the marriage had time to take. But then, in Miss Rutledge’s opinion, the whole world had gone mad, what with all these atomic experiments and tornadoes and floods and talk about so many persons secretly belonging to the Communist Party, and the entire Government, after twenty years, being taken over by the Republicans again.”

“A mother wanted marriage for her daughter, but she wanted to keep her sons as long as possible. That old saying, perhaps, that one lost a son when he married, while a daughter was a daughter all her life.”

“Dr. Hendricks, being the doctor, thought he knew more than the nurse. That might be, but sometimes, Ellen believed, a woman knew more about some things than a man.”

“It did not mean anything—a good-night kiss. Not any more. This was the atomic age, not the stone age.”

“Butch judged a man by his handshake. And if he liked guns and that sort of thing.”

“She was the life of the party and so much fun that no one cared how fat she was or what was the color of her hair.”

“I presume an author can do strange things and it’s expected.”

“Her mother was a dear, but sometimes she got weird notions in her head.”

REVIEW:
Ellen Copeland is a psychiatric nurse, working in the plush Park Avenue practice of young, hunky Dr. Eric Hendricks, when one evening just as the office is about to close, a hobo stumbles in, saying he needs to see the doctor or he will kill himself. As the efficient front-office secretary tries to put him off until next Thursday, Ellen steps in and invites the man back into a treatment room. Dr. Hendricks is a good sort who actually sees the occasional pro bono patient, and he agrees to assess the patient, even if it is after hours. Ellen departs for home, convinced she’s lost her job, but the next day she finds that Dr. Hendricks is pleased! The patient is actually a very successful author, Paul Dixon, who has come home from the war only to find his fiancée has married someone else. He becomes so depressed that he cannot write and is experiencing a psychosomatic loss of sight. Dr. Hendricks enlists Ellen in caring for Paul Dixon, and takes her out for dinner and dancing ostensibly to discuss the patient, which Ellen enjoys just a little too much.

Ellen has a boyfriend Tom, who is pressuring her to marry him, but he is moving to Tennessee for work, and Ellen does not want to leave her family in Brooklyn. It’s fortuitous that he is packing up to go just as Dr. Eric is moving in, metaphorically anyway—soon he and Ellen are dating every Friday night.

Ellen is meanwhile helping out Paul by moving him out of his tenement apartment into a farm owned by her uncle, where Paul is finally able to write. Everyone is starting to get ideas about Ellen and Paul, particularly since Paul is clearly in love with Ellen, and she is starting to entertain horrific ideas about actually marrying Paul so as to further his mental stability—especially since Eric finally kissed her and then immediately took off to go on a cruise with a wealthy, beautiful divorcee and former patient. Because a VNRN cannot exist without multiple misunderstandings, Ellen believes Eric is pursuing marriage with the boating divorcee, and Eric and pretty much everyone else, Paul included, is misled into believing that Ellen is in love with Paul.

Naturally everything is sorted out in the end, but believe that the ride is thoroughly enjoyable. Adelaide Humphries is a superlative writer, who in her best books gives you a meaty bone to chew on, with many lovely characters, painterly scene descriptions, and few of the more frustrating devices other VNRN authors fall on too easily—our heroine is never suckered by situations that wouldn’t fool a five-year-old, never manufactures her own misery, never plays stupid mind games. A book by Ms. Humphries, in short, is bound to be excellent, and in this one, she does not let us down.
Posted by Susannah at 2:14 PM