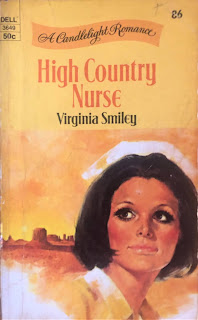 Lovely young Cass Fleming wanted nothing more than to be a good nurse. But suddenly her work at City Hospital, the suffering of small helpless children and kind elderly people, seemed too much for her. To make matters worse, her fiancé, Dr. Dan Driscoll, could not understand her feelings. Could she marry a man who was that cold-hearted? Cass decided she needed to get away from it all—to sort out her bruised and mixed-up emotions. The remote Navajo Reservation, where her Aunt Norma taught school, seemed the perfect refuge. But “getting away” wasn’t quite that easy. There were the Navajo people whom she quickly learned to love, and who needed her help. And there was the tall, self-assured young flyer, Sandy Russell, whose playful mockery suddenly turned into something much more serious. Cass realized there was no escape from life and its decisions … and the most important decision of all still lay in wait for her.

REVIEW:
Nurse Cass Fleming, apparently just a few years out of nursing school, is already burned out. Working at City Hospital in Phoenix, she has witnessed both children dying of cancer and elderly people dying of old people diseases, and she just can’t take it! Plus she had a fight with her fiancé, Dr. Dan Driscoll! So she decides to take a four-week vacation—can you imagine such a thing?—and heads off into the desert to visit her aunt Norma, who is a schoolteacher on the Navajo Reservation.

OK, I know, you’re already bracing for the racist attitudes of the Great White Woman descending into sandy poverty to bring holy healing to the unwashed, and I will in fact be making reparations in the form of a donation to the American Indian College Fund, a truly inspiring organization that has already benefitted from another horrific book I’ve read (Peace Corps Nurse) and, unfortunately, is likely to be hearing from my checking account in the future as well. On the whole, however, High Country Nurse is less appalling than other VNRNs I’ve read, in that our heroine Cass actually seems to respect and admire the Navajo people she meets. She does, however, feel that their lifestyle is backward—never mind that they were forced out of their homelands and marched on the Long Walk to a prison camp, and then to a piece of land no one else wanted, not exactly prime farmland. Can you blame the Navajo for not trusting anything white people brought them?

Initially Cass is reluctant to get involved in the community clinic, run by an aging Dr. Barton, who begs her repeatedly to help out even for a few hours, but she is on vacation, she insists, and still struggling to get over her heartbreak from witnessing bad outcomes in patients she had cared for. But before long a crisis forces her to get involved, helping to ferry a man with appendicitis to the hospital on the local medical rescue helicopter piloted by heartthrob Sandy Russell. The patient sleeps the whole way, but that’s all it takes for Cass to overcome her reluctance, and now she’s showing up at the clinic in a pale green shift because she neglected to bring any nursing uniforms with her on the trip.

She’s also hanging out with Sandy, and increasingly musing over fiancé Dan’s shortcomings in classic VNRN style. “Dan would want a large, well-staffed office in the best section of the city, with patients in the upper-income bracket.” “Dan had always been so very serious, almost to the point of being stuffy.” “Sometimes lately, when she thought of Dan, he seemed shallow and a bit selfish.” So naturally, when Sandy asks her why she doesn’t wear her engagement ring on her hand—she keeps it on a chain tucked into her blouse—she jams it back on her finger, snaps angrily at Sandy, and, when he coolly says goodbye, she decides, “She would return home to repair her relationship with Dan—and just as soon as possible, they would  be married.” Because marriage will fix everything!

Central to the story is a young girl, Daisy, who wants to attend school but is prevented from going by her grandmother. This is one of Cass’s biggest obsessions during her stay, and she tries again and again to befriend Daisy as well as win over Grandmother Many Blankets—who may recall the compulsory boarding schools for Native Americans that attempted to wipe out Navajo and other Indian Nations’ culture, but no one ever bothers to ask Grandmother about her objections.

Cass’s vacation winds down, and with Sandy now a bit more cool, she heads back to Phoenix to her job, but soon finds it—and her betrothed—a bit dull. “Cass did her work efficiently, but it was always the same—assisting the doctors on rounds, routine work, taking orders, endless orders. More and more often, in spite of her intentions to push it aside, she thought of Dr. B. and his clinic. There, she had shouldered responsibility—there she had felt alive.” Furthermore, Dan has not turned out to be all that great, surprise! Furthermore “since you came back, our dates have been a bit on the dull side,” Dan says. So she decides to return his ring, because “the butte country had changed her. There was no use in trying to force him out of her mind any longer,” she says, and then, out of nowhere, “She was in love with the young flyer.” Now she’s mooning over Sandy, but can’t possibly tell him how she feels.

Eventually Daisy, now ill with tuberculosis, runs away from home and collapses on Cass’s doorstep. Sandy’s helicopter, coming to carry her to the hospital, frightens Grandmother, who is hot on Daisy’s heels. Grandmother believes the helicopter and its radio to be “magic,” though it’s inconceivable that she hasn’t seen the ubiquitous chopper before. Suddenly Grandmother is on board with white man’s medicine and education as well: “You take Daisy to place in city to make her well. Then she will go to the school like other boys and girls.” This shockingly sudden about face sweeps Grandmother’s years of resistance away with the backwash from the helicopter rotors, delegitimizing her feelings without even informing the reader what they even were.

Another side story is Navajo Louise Beh, who wants to go to nursing school, but whose father, a medicine man, is against it. Cass visits Louise in Louise’s home, and “there was, Cass noted, nothing in the room to show that an Indian family loved here.” Louise says, “White man’s school has taught me much better ways,” and my heart broke for poor misguided Louise.

This book is fairly simplistic and formulaic, with cardboard characters and perfunctory writing that yielded nothing for the Best Quotes section. While the thinly veiled racism will make you wince, there’s not much else here to either upset you--or interest you, either. If we hear a lot about sand, we really don’t have much description of the southern Arizona landscape.  Like the other two Virginia Smiley books I’ve read (Nurse Kate’s Mercy Flight and Nurse of the Grand Canyon), this book is not the worst I’ve reviewed, but it certainly is a flat and arid desert.