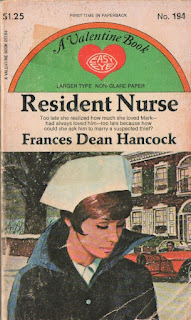 Mark Lennon wanted to marry Nurse Lyle Mackey and take her away to Mexico. But Lyle, not sure she really loved the young architect, kept putting him off. Besides, she enjoyed taking care of the twenty elderly women “guests” at Harewood House. It was a dream job. The dream became a nightmare, however, when one of the guests reported a valuable ring missing. When Lyle found the ring, under “mysterious” circumstances, ugly rumors began. Still, no one would have seriously suspected her of theft if Dr. Tom Blake hadn’t encouraged the idea. Lyle wondered why he hated her so much … perhaps because she’d refused to date him after he’d tricked her into accompanying him to a gambling house? Then the ring vanished again, and this time unfounded suspicion drove Lyle out of Harewood—heartsick, wondering if she would ever be able to clear her name …

“I hate middle-aged people. Youth is glorious and old age is compensating.”

“Lyle sometimes suspected that she would have been more enthusiastic about him if her parents had been less so.”

“Sometimes I feel like beating you and wonder why I’m so much in love with you with so little encouragement.”

“It’s the rich old women she feels sorry for. In poor or middle-class homes the old women have the satisfaction of still being useful as baby sitters or helping with the housework, and they know their children aren’t tolerating them for the sake of legacies, because they have nothing to leave.”

“Being a good-natured woman, she bit into a caviar sandwich to restrain herself from making any comment about people who had never heard of the apostolic succession.”

“I’ve seen a lot of girls wearing their hair like that. Usually they’re accompanied by men with beards.”

“When you’re older you’ll find out that many times you will be credited with virtues you don’t deserve and with faults that you never dreamed of.”

Lyle Mackey works as a nurse at Harewood House, a private residence for 20 wealthy old women who intend to live out their lives there, a sort of early assisted living facility. She loves her work because for the most part the old gals are fairly healthy and only need routine pills and maybe a back rub now and then—working at the hospital had been a difficult, low-paying job, and she was glad to be out of it. Her boyfriend, Mark Lennon, relentlessly pushes her to marry him, and makes sneering remarks about the Old Dears. “ ‘I can just see you passing out the sleeping pills and the tranquilizers and the cathartics and diuretics, and so on.’ Mark’s mouth twisted in disgust.” He’s got no pity for the “selfish old biddies thinking only of prolonging their useless lives,” although I’m not exactly sure what he thinks the alternative is, and what exactly any of us are doing every minute? She’s just wasting time at her job, he tells her. “You could do better—marrying me, for example,” he says. Right. So exactly no one is sorry when Mark packs off to Mexico for several weeks on business. But before he leaves, he proves true to form by insisting, “When I return from this trip, either you’ll  marry me and go back there with me or we’ll just say goodbye.” If I were Lyle, I wouldn’t have made him wait weeks for his answer. At least she feels that his ultimatum “offended her sense of freedom and independence.”

In her free time, Lyle accepts a date with Dr. Tom Blake, who is the nephew of Mattie Pringle, a Harewood House inhabitant. He’s a handsome man, but Lyle is not impressed when he takes her to a private house on their date. “He’s going to entertain me inexpensively by taking me to visit friends who are giving one of those Bohemian parties at which anyone is welcome, Lyle thought angrily.” Which seemed snobbish and odd to me, but as luck would have it, the place turns out to be a gambling parlor. Tom dumps her in a chair and heads off for the craps table, where he makes a bundle, and she makes the acquaintance of George Glyndon, who happens to be an antique dealer, Mark’s boss, and a cousin of another Harewood House resident—talk about small worlds! Eventually Tom is ready to leave, but his time with the dice has turned him into a monster, and after he insults Lyle for not enjoying gambling, he drives her home and assaults her in the car outside the front door. She slaps him hard across the ear and escapes, while he shouts, “You’ll be sorry for this, you little tramp. No one’s going to treat me like that and get away with it.”

His plan for revenge involves taking up with the other nurse at Harewood House, Mollie, and curiously Lyle says nothing at all to Mollie about her nightmare date with the creep, and her hints that she would never date Tom again only intrigue Mollie more. “I’d like to live dangerously just once,” she says, and soon she’s seeing him regularly, though it’s not clear if Tom is assaulting her too.

Then Tom’s aunt’s valuable emerald ring goes missing, and many chapters are spent looking for it. When we’ve finally forgotten all about the darned thing, it turns up in the drug cabinet—to which only Lyle, Mollie and Harewood House director, Mrs. Gaitskill, have keys. Good doobie that she is, Lyle turns the ring in to Mrs. Gaitskill, who decides they will say that the ring was found in the bookshelf. Miss Pringle is relieved to get it back—but then a few days later it’s disappeared again, and now she’s out for murder, egged on by nasty nephew Tom, who starts spreading gossip among the old ladies that Lyle stole it. Soon everyone is looking at her askance, except Mrs. Bickford, who takes her aside to tell her that she had been accused of murdering her husband years ago, but there had never been enough evidence to convict her—painting a picture that leaves you thinking that she actually did it. She tells this story to Lyle in the hope that it will help her feel better, but the next day we learn Mrs. Bickford died overnight. Did Lyle kill her? Apparently not, but why did the author?

Now with ignominy hanging over her, Lyle suddenly decides, “She was ready to marry Mark now. Then, because she was always questioning herself, she asked herself if it was love for Mark or a desire to get away from a job that no longer interested her and had become actually unpleasant.” But though she always questions herself, she doesn’t like to give any answers, and in the next sentence we’re on to some new scene. In the meantime, Tom is pressing Miss Pringle to call the police and have Lyle arrested, saying that Lyle had thrown herself at him and had stolen the ring as revenge when he had turned her down. Though Mrs. Gaitskill is smart enough to make Miss Pringle realize that police involvement in the matter will not turn out well, she nonetheless fires Lyle, truthfully pointing out that her effectiveness at the establishment is shot, though Lyle had been on the verge of quitting anyway. Naturally, now that she has been given what she was likely to take, Lyle is not so excited about it. So when Mark writes that he is coming home imminently, suddenly Lyle is madly in love: “What a fool she had been to let him go without an answer. How could she have been so stupid? She loved Mark; she had loved him almost from their first meeting. Was it some silly idea of keeping her independence? She didn’t want independence now. She wanted protection. She would marry Mark at once. Mark would take her to Mexico with him, and long before they came back, everything would be forgotten. It would solve all her problems.” Oh, absolutely, that’s true love, for sure, though we readers have seen nothing in the man to inspire anything except disgust. Mark enters stage left about five minutes later, and Lyle repeats these self-delusional statements for him, but adds, “I’ve just remembered I can’t marry you,” and tells him the whole story.

Well, you are not going to believe this, but somehow in the few minutes between landing at the airport and picking up Lyle, Mark had seen George Glyndon, who as it happens had shown Mark a remarkable emerald ring—guess whose it turns out to be? It seems that Tom Blake, who had run up huge debts at the gambling house, had stolen it the first time and used it as collateral for his debts, then won some money and gotten it back, but then lost even more money, taken the ring again, and sold it to George. In a patented Agatha Christie scene, everyone is invited to Mrs. Gaitskill’s office, where the truth is revealed. Lyle is offered her job back, and though Mrs. Gaitskill all but begs her to work for even a few days since she is now down to just one brand-new nurse who is still learning the ropes—Mollie has quit, too—Lyle turns out to be somewhat mean herself and refuses to help out, though it’s Mark who does all the speaking for her, because now that she has a man, she doesn’t need a job or a voice.

This book is a bit over-long and takes us to some odd corners, such as Mrs. Bickford’s confession and death, without ever being especially interesting or suspenseful. The angle of Tom Blake as an evil masher and jewel thief is unsatisfying because in the end, after he’s cruelly dumped Mollie and is setting off on a luxury cruise with Miss Pringle to get away for a while to put this embarrassing incident behind him, he is never punished for any of his bad behavior, but rather, as the book declares, is rewarded, because this way everyone saves face. I’m not sure why this is the most important thing, but there you have it. Lyle’s instant conversion into a smitten fiancée is not at all convincing, particularly since the book itself points out that she is likely using the marriage to run away from this upsetting situation—again, to save face. Her sudden chucking over of the independence she’d initially valued so highly to marry a man who had shown not one single redeeming feature in the first half of the book is especially maddening. I’m always curious about authors who leave us with these odd messages. Was it the times—remember, this book was written more than 50 years ago—that forced her to suggest to young women that their independence was not as important as landing a man? that sexual assault was something the victim should be ashamed of to the point of not even warning a potential future victim? that men always win, even when they are felonious assholes? Was she self-aware in the slightest about the horrible messages she was sending her readers? Or was her whole-hearted embrace of them meant to slap some sense and feminism into the young gullibles? I’m not sure that, without at least a glimmer of a clue that Lyle is aware at the end that she has made an enormous sacrifice at the altar of convention, we can ascribe the latter motive to Ms. Hancock, we can, sadly, only believe that she had drunk the Kool-Aid, and is now offering the readers a silver serving tray laden with more of the same.