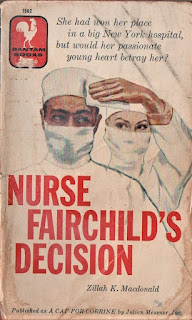 When she graduated from St. Agatha’s Hospital, all the other young nurses envied Corrine Fairchild. Daughter of wealth, Corrine was engaged to socialite Heathby Grant. “She has her future settled,” the girls said. “Corrine’s got herself a nice soft spot on millionaire’s row!” So as she plunged into the hard, gruelling life of a big city hospital, Corrine had to struggle against temptation to follow the path of ease and pleasure offered by her handsome fiancé—had to struggle to be true to the high calling she had chosen. And then into her life strode young Dr. John Burnette, aloof and arrogant as a Bedouin chief, who had his own plans for this warm and gifted girl.

“Her eyes were caught by a small panel in one of the clerestory windows. It showed Christ on the cross. Her three years in the training school made her see it with new eyes. No medication had eased the intolerable pain of the festering thorn wounds!”

“She moved nervously on her wooden chair. Bing! Her stocking snagged on a splinter. Horror struck her. A run in one’s stocking, a hair out of place—such things brought instant reproval. Would they deny her her diploma if they saw the run?”

“Oh dear, Corrine, how could you let your feet grow so? You had such beautiful feet. They’re quite ruined. It’s that dreadful nursing you insisted on doing!”

When I picked up Nurse Fairchild’s Decision, I had high hopes that this would be as bad as the other books of Zillah Macdonald’s that I’ve read, to wit, Roxanne, Company Nurse and Nurse Todd’s Strange Summer. (Yes, sometimes a bad novel can be a lot of fun—love to hate and that sort of thing.) Unfortunately, though completely mediocre, this book has little of the laugh-out-loud stupidity that the others offered in abundance. But then, both those books had co-authors, so perhaps Zillah really had her partners to blame. Only time and a few more of her books will tell.

Corrine Fairchild is just graduating from nursing school with chums Clare, Betty, Barbara, Jean, Beth and Tsuneko (unfortunately painted with a racist brush, so there’s another penitent donation for me to make). Early on we’re informed that her career has caused problems between her and her mother, to whom she refers by her first name, Elsa, because “her Southern mother recognized only one career for a girl, a socially important marriage.” The marriage Elsa is banking on, now that graduation is over, is to longtime friend and beau Heathby Grant, a very wealthy neighbor who is constantly pressuring Corinne to marry him. She, unfortunately, even gives the matter a lot of thought, in classic VNRN trope: “Couldn’t she be wrong? Wouldn’t the feeling she had for him inevitably ripen into something deeper if she married him?” she wails for about the fifth time in the book. Part of her consideration of Heathby’s proposal lies in the fact that she’s fallen for another VNRN classic, the lab man whose “devotion to his beloved science excluded ordinary human feelings.” Though she does have one encounter with him—she’s delivering a message to him in the lab when the mean old nursing supervisor finds her there and threatens to report her, and Dr. Burnette saves her by telling the supervisor that they’re engaged—but outside of that weird meeting she’s mostly just peering hopefully around corners or watching miserably as his white coat disappears onto the elevator. “He had been on the floor, and he had not waited to talk to her! It was as if he were deliberately avoiding her.” You can see what the attraction is.

Other curiosities lie in the rumors that Dr. Burnette was kicked out of the army, and that the family he grew up with—he’s an orphan—doesn’t like him much and so taint his reputation with innuendo. Some even suggest that he’s the one who is breaking into the narcotics cabinet and stealing the drugs! (He’s not, of course, and when the true thief is outed—a much-beloved longtime cancer patient whom Dr. Burnette thinks of as a mother—the completely benign reaction of Corinne and Dr. Burnette is rather bizarre.) Even Corinne suspects him of taking the drugs, both early and late in the book, after he’s asked her to wait three months for him, until he’s “free”—though he will tell her nothing about what the issue is. She also worries that he’s fallen for another woman, but that too is quickly brushed away with, “She did trust him,” though it’s clear that she does not, and indeed she later thinks that “this might be the end of things between them” when she tells him she’s had to report another narcotics theft.

In the end he comes to tell her the story, that he was kicked out of the army for taking an experimental drug that turned out to be a cure for a deadly tropical disease, and that he’s been taking another and, until it’s proved it won’t kill him, he can’t possibly marry Corinne, or even tell her what he’s been up to, though his secrecy is hard to understand—as is her willingness to accept it in someone who says they want to marry her.

Another odd aspect of the book is that despite her oft-stated disgust with her mother’s social climbing, she herself is a snob—it’s clear that she revels in the luxurious life she’s dipped into when she’s with Heathby: When they visit “the most exclusive club this side of Hades,” she briefly considers the sumptuous surroundings and the club motto “Up above the world, careless of men, like gods are we!” and compares it to the lives of some of her patients, including one who suffers from malnutrition—but then without another thought about it she changes in the cabana, swims at the private beach, stuffs herself and throws leftovers to the seagulls. “ ‘It’s nice to be free, away from the city crowds,’ she said as she stretched out lazily on the beach.” So much for Corinne’s conscience.

It’s hard to care for Corinne, understand her devotion to Dr. Burnette, or believe her passion for nursing—“this was not a career on which she was embarking. It was a dedication”—since she doesn’t truly seem dedicated to anything outside of her unswerving pursuit of a man she’s barely spoken to, and who doesn’t seem capable of human interaction, much less honest communication. Whatever Corinne Fairchild’s decision was—that’s not really clear either—it’s not a bad decision on the reader’s part to give this book a miss.