One String for Nurse Bow 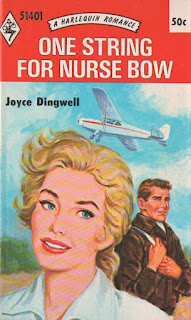 The twelve young graduate nurses were waiting eagerly to see what glamorous jobs were to be allotted to them, and none was more eager than Charlotte Bow. And to say that she was appalled at the prospect of being sent to Binkabunkacarrawirrawarrawillapillimundi, in the heart of the Australian Northern Territory, was putting it mildly!

REVIEW:
Nurse Charlotte Bow is graduating from a training program with the Farflung Nursing Association, which sends nurses into remote areas for a term. The day the assignments are announced, everyone is so excited to find out where they will be sent! Mostly, it seems, because they are really looking for husbands: “She’s as good as married right now, resented Charlotte,” after a colleague was posted to an assignment as the only woman on an island of 80 men. Poor Charlotte, however, wins the assignment to—here’s the joke of a name—Binkabunkacarrawirrawarrawillapillimundi, way Down Under. “They had all agreed that if they got that draw, they would blow out their dedication lamps there and then,” because it’s “too farflung,” but mostly the problem seems to be that there are not going to be many men, or white men, anyway. The guy on whose farm the hospital is located is called Brother Seb, and another hilarious joke is that Charlotte thinks he is a monk sworn to celibacy, though this is cleared up on page 29.

The third joke we’re subjected to is that every man who meets Charlotte asks her about her strings, an apparent reference to an apparently outdated saying (I’d certainly never heard of it) “a string to your bow”; which means, “If someone has more than one string to their bow, they have more than one ability or thing they can use if the first one they try is not successful,” here “thing” signifying “man.” It turns out that almost every man she meets is another string for her, e.g. Tony the teacher, Dr. Jamie Carley, and prospector Jeff Wright. Not Seb, though, ha ha! “Charlotte scoffed, a string! Brother Seb!” And, we’re told, the feeling is mutual: “He was not even aware of her other than as the matron of his clinic. He did not understand strings for bows.” We’ll see about that!

The book is a fairly mundane plod through the ups and downs of life in the outback, including a typhoid epidemic, an earthquake, an indigenous woman who delivers quadruplets and keeps them—in this backward narrative, native tradition has parents abandoning all but one of multiple births, I’m sorry to report—and delivering a small herd of cattle overland through the bush. None of it is terrifically riveting, and the condescension toward the indigenous people, if not the most egregious I’ve met in a VNRN, is uncomfortable at best (the children are always referred to as “pickaninnies,” for starters), so there’s another donation to the American Indian College Fund.

One thing I did appreciate was Charlotte’s ability to stand up for herself. Though she’s a brand new  nurse, she manages to meet each crisis with relative aplomb and even success. She also expresses outrage at some of Seb’s declarations, such as when Charlotte finds that a native woman has been beaten by her husband. Seb calls the bruise “nothing serious,” and when Charlotte protests, he insists that “a bashing and a thrashing” is indeed off limits, but a “spank-bruise” of the “wifely spank variety” is OK, and Seb, who speaks the native language, tells the husband “it was not good to hit very hard,” and that he should “give it next time where it didn’t show.” Charlotte is spluttering with rage, but in the end, Seb just says that Charlotte herself was not spanked enough and that’s the end of the conversation, leaving Seb with the apparent upper hand. So even if she is right, the story does not come down on her side.

On Charlotte’s less admirable traits is her complete inability to see the obvious. She doesn’t understand when first Dr. Jamie and then Tony say they are no longer wooing Charlotte because there is “one too many, which is a whole lot too many. In fact it closes the subject, doesn’t it?” Dr. Jamie explains. But Charlotte can’t figure out what he means. “Won’t someone please enlighten me?” she asks Tony. “Ask Sebastopol Brown,” Tony says, and she still doesn’t get it. Then, though Seb has asked the friars at the nearby mission if they can perform marriages, Charlotte doesn’t  figure out why Seb, gored by a bull in the bush, is refusing to go to the nearby mission for medical care. “I vowed that the next time [I went to the mission] it was to … it was for … it was …” but no pennies are dropping for the otherwise capable Charlotte. At least, as the only healthcare practitioner for hundreds of kilometers, we know she won’t be quitting her job as a nurse when she and Seb eventually get things sorted. The prose is pleasant enough, but there was nothing for the Best Quotes section, and the lame jokes about the endless name and the strings quickly grew flat, if they ever had any dimension, with repeated pounding. In the end, if not the worst VNRN I’ve read, One String is a one-note story without a lot of life to it.