A Nurse for Dr. Sterling 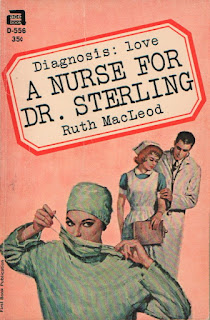 Young and idealistic Janet Raleigh, fresh out of an exclusive school, found herself bored by the shallow pleasures of high society. Seeking something to fill her life and give it meaning, she chose nursing as her career. To her amazement she found that her wealth and background created an unexpected barrier. The doctor she loved doubted her sincerity and patronized her; her supervisor questioned her conduct and humiliated her; and then came the brutal attack that put her very life in danger.

“Please, nurse … I’m going to die! Give me just one kiss to take with me—”

“Janet, you don’t want to be a nurse! You’ll have to do awful things! As a nurse you’d have to make hundreds of beds, and bathe all sorts of dirty people, empty bedpans and emesis basis, and listen to people whine about their aches and pains!”

REVIEW:
Imagine my horror when, arriving at the house we’d rented for a long weekend of walking in the apple orchard and reading on the couch, I discovered I had left my nurse novels at home! What to do, what to do? Well, thankfully this is the era of the e-book, and I was actually able to find a handful of actual nurse e-novels out there, including—imagine my surprise!—The Nurse Novel Megapack of four novels, including three I hadn’t read yet (actually, I knocked off two of them over the weekend, so now I’ve just one left). Coming soon, a blog page listing other nurse e-books, should you happen to find yourself in a similar horrifying predicament, dear reader!

Anyway, A Nurse for Dr. Sterling is a curious choice for a curated selection of nurse novels, because it in my opinion crosses over the line of true VNRN just a smidge. The problem here is that most of the  book is told from the point of view of Dr. David Sterling; nurse Janet Raleigh anchors only about a third of it, despite what the back-cover blurb suggests (and in this case, the blurb errs on a number of points, so beware!). When we meet him, Dr. Sterling is fleeing a malpractice suit he’d lost—he had not diagnosed a terminal brain cancer in a man who had demonstrated few vague symptoms, so though it wasn’t really his fault, most of his patients had left him and he’d fled town and the blot on his reputation to come to Las Lomas, California, an actual town on Monterey Bay.

He’s been hired by his old acquaintance Dr. Graham Burns, who had dumped his excellent, dependable, strong, smart wife Mildred, who had supported him during his up-and-coming years, for a young vixen half his age. Mildred’s gone on without him and is now superintendent of nurses, while Coralee is making passes at David from about the first minute they meet. David is determined not to wreck the marriage of his old friend and his second chance, but Coralee is a very determined young lady!

What’s interesting about her as a character, however, is that she has an awful voice, and we are reminded of this repeatedly, “a tone that had neither resonance nor depth. If he had heard her first on the telephone, David thought, he’d have pictured her as a dull, drab, dishwater blonde, probably chewing gum.” Mildred, on the other hand, “wasn’t a beautiful woman, but her personality made looks unimportant,” while Coralee seems to be the opposite. “I think she’s beautiful,” David admits of Coralee, “and would be even more so if her voice matched. As a person, however, I wouldn’t stack her up against Mildred at all.” It’s an unusual take in a VNRN, that personality outweighs looks; where will this come out in the end?

Meanwhile, back at the ranch, we learn about Janet Raleigh, a nursing student who has left her privileged background because “I want to do something important, she thought; not just to keep occupied, but to make my life count for something.” Under the withering eye of Nurse Daisy Andrews, a 40-year-old spinster battle axe who does not deserve her name (or the nickname Dizzy, which the girls have given her, tee hee!), however, Janet is losing her resolve, as Nurse Andrews bawls Janet out in front of the doctors on numerous occasions (but winning her the sympathy and interest of one Dr. David Sterling, so it isn’t all bad!). One day poor Janet is given the difficult task of bathing the most difficult patient on the ward, 19-year-old Archie Crane, who is not recovering from his burst appendix eight weeks ago. He refuses to cooperate with the sponge bath until Janet kisses him, which she does only after he has wrapped himself around her and refused to let go.

The bastard tells another nurse of his exploits, and Janet is bawled out yet again by Nurse Andrews. She’s ready to quit, until wise Mildred asks Janet to write down all the reasons she wanted to become a nurse and why now she wants to quit—and when one page is full of scribbling and the other has only Nurse Andrews’ name on it, Janet is ready to get with the program. Mildred sends her on her way with some kindly advice: As a student nurse, even if her superior is unfair, “in respect for her professional knowledge and standing, you follow her orders meticulously, listen carefully to all she says, refraining from comment or retort if you don’t agree. You accept her criticism gracefully, knowing it’s for your own benefit eventually.” Initially I was a little bothered that the bully was going to triumph, but I should have trusted Mildred—two weeks later, she demotes Nurse Andrews from head nurse to assist in the OR. (Of course, we astute VNRN readers see the writing on the wall with this move!)

On the lam from Coralee, David asks Janet to go out with him, and she agrees. “Janet was an easy girl to be with, David reflected. She didn’t make demands, and was at ease in any social situation. It’s her poise that makes her so darned attractive, he thought, watching her.” Soon the pair are seeing each other almost every night, but that doesn’t stop Coralee, who literally chases David around the golf course when every shot she hits lands 10 feet from David’s ball. The woman could have out-whacked Louise Suggs (a neglected golf giant who beat Sam Snead on a par-three course in 1961, correctly arguing that what they lacked in driving distance, women could make up in the short game). When he turns down her forty-ninth pass in the sand trap of the 14th hole, Coralee almost slugs David in the head with her niblick, but Graham saves her from becoming a murderess by dropping with what appears to be a heart attack. Dr. David Sterling knows better, however, and diagnoses a cardiac tumor, and never mind how ridiculously rare those are, because he’s already correctly diagnosed masher Archie Crane with a liver abscess.

In the interim, David cannot commit to Janet, so she foolishly accepts a date with Archie, and her date with Archie goes horribly awry when he proves that his behavior in the hospital was, far from an aberration, just the tip of the iceberg when he drives her to Rocky Dell Park and assaults her, eventually pushing her off a cliff after he’d thrown her to the ground and she’d bashed him on the head with a rock. Knocked unconscious, she comes to only to find he’s fled the scene, leaving her to flag down a passing car to get home. She’s two hours late for curfew at the nurse’s dorm, and there’s Nurse Andrews, all full of slut-shaming. To the high credit of all her friends, everyone who hears the story wants Janet to call the police, but she resists—and then it turns out she’s suffering a subdural hematoma and needs immediate brain surgery! The surgeons, of whom David of course is one, are scrubbed and boring holes in Janet’s skull when Graham drops of another attack, and David steps up and completes the surgery. Does he get any thanks? Well, Janet’s grateful, but Nurse Andrews is livid because David is not a brain surgeon! In revenge, she’s ready to testify on behalf of Archie Crane in the assault trial, pulling out what she calls David’s affair with Coralee—what this has to do with the assault is beyond me—as it’s her opinion that Janet asked to be attacked at the park after her scandalous behavoir, being attacked at the hospital. But she’ll withhold her testimony if Janet agrees to resign—that’s one hell of a grudge!

But before Andrews has the chance to crush the pair like little bugs, Graham finally agrees to exploratory cardiac surgery if David will do it, as it seems he can do anything except the dishes. Andrews is assisting in the surgery, and—you guessed it—hands David the wrong drug when Graham’s blood pressure tanks. David manages to pull Graham away from the Grim Reaper with open-heart massage, and Andrews flies out of the OR and commits suicide in the scrub room, injecting her own heart with the same incorrect drug she’d handed David, one of the more spectacular VNRN flame-outs I’ve ever witnessed. So everyone’s reputation is saved, and now it’s just for David to come to his senses and propose to Janet. Also for Graham to come out of surgery to find that Coralee has left him and that Mildred, bless her, will take the louse back. So happy endings for all.

This book has strong women characters in Mildred and Janet, women whose character is more important than their looks; Coralee, who wins big in the latter department, is the loser in the end. I did appreciate her dramatic presence, though, as I did Nurse Andrews. I also found some wisdom in the book, in the advise that Mildred gives Janet about accepting criticism, and also in passages in which it’s suggested that Archie is faking his illness: “I believe it’s a mistake,” David says, “to ascribe illness to neurosis before every physical source is thoroughly checked,” which is a maxim still very true today and of which I’ve needed to remind myself on occasion. But while it has a lot to recommend it, I just didn’t love this book—my beef with it being that it’s mostly about David Sterling, and the writing, though it had some interesting ideas, just didn’t sparkle enough to make an A-grade book. It’s worth a read, though, so if you have the chance to spend the afternoon with David Sterling’s nurse, take it.