The Doctor of Blue Valley 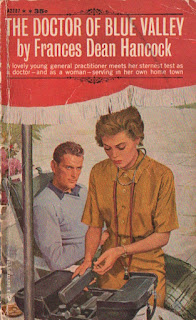 When Dr. Barbara Davies returned to Blue Valley to practice the profession she loved, she found two newcomers to the remote little town. Young Dr. Richard Blake, handsome and unmarried, who, for an unexplained reason had left a big city practice to open an office in Blue Valley. And wealthy young John Lowton, badly crippled by a terrible accident, who said Blue valley held happy childhood memories, that he had returned to hide his pain and helplessness from the world. One of these men found the way to Dr. Barbara’s heart. But she knew she must solve the riddle in his past if she were to find peace for the future.

BEST QUOTES:
“Barbara always talked to children just as she would to adults, which was one reason they liked her. They liked it when she used words they didn’t understand, because words are such fascinating things and one can repeat a new one over and over until it has color and all sorts of mysterious meanings.”

“As a young girl, she had been active in the fight for women’s rights and she never seemed to realize that the battle was over and that all the parades and hunger strikes and imprisonments were now ancient history. Her fight against MEN went on.”

“You’re a very pretty girl, even if you are a doctor.”

“If you can persuade some of these people to have fewer babies and fewer hound dogs, I’ll appreciate it. They come out to meet you in packs—I mean, the hounds, not the babies—and they bay at me. They’re entirely too affectionate; they ruin my trousers.”

REVIEW:
Dr. Barbara Davies has returned home to Blue Valley, Tennessee, the small town where she grew up. “She knew that she could have done nothing else in view of Aunt Agnes’s encouragement and financial help,” because all rich spinster aunts are also very imperious. Here she finds another doctor in town, Richard Blake, who is doing fairly well for himself: “Dr. Blake was quite generally popular. The men liked him. He went hunting and fishing with them and had even bought a coon hound. The men might laugh a little at his Abercrombie and Fitch clothing and elaborate fishing gear, but he was a fairly good shot and could take his ‘likker’ straight and was an all-around good fellow even if he was a city man and a Northerner.” Immediately all the townsfolk pair him up as the future husband of Barbara, but it’s easy to see that’s just a red herring. Dr. Blake is fun to hang out with and he’s certainly cute and all, but he’s a bit of a lightweight, and he is condescending to his patients. “The way you get on with these backward people without losing your temper over their superstitions and their yarbs is wonderful,” he tells Barbara. “He was always frivolous, she thought. There was nothing that she could honestly criticize about his treatment of his patients, but he did it all as if it were some secondary occupation.”

The main hook of the story hangs on a young man, Lawrence Price, who is almost tossed in the front door of the clinic, which adjoins Aunt Agnes’s house where she lives, by a huge thug. Lawrence has been slashed in the face, and it requires Barbara’s skill to sew him back up, and this being the old days when folks needed weeks in the hospital to heal a paper cut, he is moved into the back bedroom for his convalescence. “He was, without question, a very good-looking boy, and she did wish that he was not a young thug. He didn’t look like one, but all the evidence she had pointed to his guilt.” But despite his being a hoodlum, out of concern that he will be attacked again, she and Agnes tell a little fib, that he is a cousin from out of town, but this proves a smidge inconvenient when Charles continues to hang around, aided and abetted by Agnes, who likes having a young person around to dote on, since Barbara is too busy working all the time for petting. Barbara’s office gal, Willi May Sayre, also takes a shine to Lawrence, and one minute she’s swooning with love, and the next she’s bursting into tears and running out of the room.

There’s this other man in town, John Lowton, who the town believes has been wounded by elephants, rendering him a cripple for life. He’s proud and reserved, but he immediately cottons to Barbara, and early on in their acquaintance he kisses her—but then takes it back: “I’m sorry. For a moment, I forgot that you’re a doctor—and that I’m a cripple,” he tells her. “It was dreadful that he should feel so humiliated simply because he walked with a crutch—as if that debarred him from casual kisses,” she thinks, and schemes to get him seen by her old mentor, the great orthopod Dr. James Gray.

All the men have mysteries, come to think of it—how John Lowton became crippled (a tree fell on him when he was “collecting” rare birds for the Smithsonian and a book he was writing), and the back stories of Lawrence and Dr. Blake, who it turns out has been accused of something in Chicago and fled to where his reputation couldn’t find him. Two of the mysteries are intertwined, of course—it turns out that Dr. Blake had been dating Lawrence’s sister, and on a date had argued with her, and she’d jumped out of the car and gotten hit by a truck and killed. Lawrence had gone to Dr. Blake’s office with a gun, and Dr. Blake had slashed him with a scalpel, and Dr. Blake’s father had been visiting and had grabbed Lawrence and dumped him at Barbara’s office. Wounded in the act of attempted murder, Lawrence had kept his mouth shut about the incident lest he be arrested. But now, scared straight after another unsuccessful attempt on Dr. Blake’s life in which he shoots Dr. Blake in the shoulder and gets away scot free when Dr. Blake flees town again, he is ready to marry Willi Mae and move back to Chicago.

John Lowton, of course, undergoes surgery with Dr. Gray and is no longer crippled, so all is right there, and we can tie up that completely predictable ending in a completely perfunctory way. All is not completely lost, however; Barbara is an independent woman who tackled adventures without fear and does her job very well. She’s also the only VNRN heroine I’ve met in months who actually refuses to accept it when someone says that nothing is wrong as they mope around the house. On the other hand, she refuses to ask John Lawton to dinner, because “asking him to dinner, although the invitation came from Aunt Agnes, he might make him think that she was pursuing him. The thought was unbearable.” So that’s one job she doesn’t tackle very well. I had hoped this book might be along the lines of the soft, sweet, and slow stories of a different Hancock, Lucy Agnes (who, ignoring the really bad Student Nurse, has earned a 3.5 average in the other four reviews she’s gotten here), but alas, it’s more commonplace than that. It’s certainly worth reading, with good humor, several big vocabulary words, and a reference to Jane Austen, but it’s just that I had hopes for more.