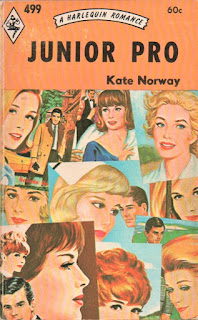 Before Lindsay Wood took up at nursing, she had been warned that it was hard work. What she hadn’t heard much about was the difficulty of steering one’s personal course. She did find someone to whom she felt she could turn for advice--but he was the resident medical officer, far out of the sphere of a lowly probationer. And she couldn’t quite understand his attitude, sometimes helpful, sometimes very much the reverse. How she coped with all her perplexities is told in a lively story with an authentic hospital atmosphere.

BEST QUOTES:
“I wished, while I was about it, that Sister Tutor had taught us a little less about finding our way around the buildings, and a little more about finding it round human situations. It seemed to me that nurses needed a good deal of practice in dealing with people, and I knew I didn’t have it.”

“I could eat you, darling, only I haven’t time.”

“It’s a good sign to be a little scared. Bad nurses never worry—they don’t know how.”

REVIEW:
How lucky for me that after coming out of the first F-grade nurse novel I’ve ever read (if you must be reminded: Jolie Benoit, R.N.), I pick up such an incredible gem as Junior Pro. This book has all the hallmarks of a true great: Lots of girlfriends, witty writing that sparkles on every page, a feisty heroine, and—a rare treat—one of the best endings I’ve ever encountered. Told in the first person, the sixth such VNRN I’ve read (but the third by Olive Norton; it seems to be a favorite trick of hers), here we meet Lindsay Wood, who is just entering her first year of training to be a nurse, making her what they call in this English hospital a “junior pro.” On the eve that the “lambs” are finishing their didactic months and being sent to the wards, though, there’s a ball. Like most VNRN hospital balls, this one is momentous, here because only one man asks her to dance. “When we did get on the floor we found ourselves in the middle of a Paul Jones [a dance in which you change partners], and I lost him after about four strides. He was just tall enough to be comfortable to dance with, and I was annoyed. Nobody came to claim me, and I went back behind my pillar.” He turns up later, though, apologetic, and takes her for a drive. When he finds out she is just a brand-new student, instead of mussing her lipstick, he starts the car. “Home, Madam?” he asks, and she replies, “Home, James,” and when they arrive at the nurses’ home, “he bent his head and kissed my hand very gently, and gave it back to me as though it were something extremely fragile and very precious, instead of just thing I used to hold a tennis racquet with.”

Like many people in their first days on a new job, Lindsay lands on the wards with a splat: There is almost nothing she does right, to such an extent that her first moment of triumph is remembering to take the stairs instead of using the elevator, which is forbidden to first-years. The worst of her crimes, though, is when her chauffeur turns up on the ward dressed as the R.M.O.—that’s resident medical officer, or chief of medicine in the UK. “Good morning, James,” she says without thinking, and it turns out that it is a most serious taboo to speak to a senior medical officer when you’re only a nursing student, made even more scandalous by the fact that Dr. Findon’s first name is indeed James. But he seems to forgive her, because when it turns out that she has scored top marks in several subjects and just barely loses out on a prize given to the top student, he gives her one: a silver pin shaped like Aladdin’s—or Florence Nightingale’s—lamp, engraved “Findon prize—Nurse L. Wood.”

Over the ensuing pages we follow not exactly the most original plot line, but still a very enjoyable one as Lindsay flounders less as the days pass, tangles with Dr. Findon, goes home to visit her family on their farm in Wales, and wallows heavily in a mistake of a relationship with Dr. Jack Beresford, an incorrigible flirt who has claimed the heart of her best friend Catherine, complicating matters. But she really does like kissing Jack! Which makes her agree when he vaguely suggests that they marry, though she comes to her senses a few pages later, thinking it would be better to have Catherine than Jack—but then, dang it, he kisses her again, and she loses her head once more. And again, the next morning, when Jack comes around to plan the wedding, she insists—as she has done throughout the book—that she is going to finish her training and get her nursing degree, which will take three more years. Hearing this news, Jack “sulked.” When Catherine pins Lindsay down later on, Lindsay insists it’s over: “He made it clear, then, that he wouldn’t hear of my finishing my training before I settled down. That changed the whole thing. Because nothing and nobody is going to stop me from getting State Registered. If he isn’t satisfied with that, then it’s no go. And he isn’t.” You go, girl!

Lindsay is a heroine we can adore because she is not perfect, but she honestly works very hard and she has a good heart. She is forced to give up her beloved Findon prize pin when a misunderstanding causes her to be suspected of stealing a brooch that a patient has given her, and when months later the nursing matron says she has earned it back, Lindsay disagrees: “James still doesn’t think I come up to some standard of his own,” she decides to herself. “So I can’t wear his badge because it would burn a resentful hole in my apron. I know whether I’m ready to have it or not, better than anyone. And I’m not.” Toward the end there is the usual catastrophe when the hospital’s old smokestack falls in a storm, landing on an ambulance, and Lindsay, who is on the admitting desk in the ED with Dr. Findon, crawls through the broken window in the ambulance door and gives the trapped patient inside a hypodermic of morphine, talked through the procedure by Dr. Findon—and later she asks to be marked off for having given an injection, the spunky lass! When she is on night duty, she uses the quiet hours to study her butt off, because she is deeply passionate about medicine, much more so than surgery: “The way I saw it, medicine was so much more complicated and important than merely tailoring people’s insides neatly. Medicine took skill, and brains, and patience, and selflessness.”

The writing here is not so much laugh-out-loud funny but just constantly and quietly sparkling: “I thought our off-duty time was a mad scheme to let us relax,” Lindsay says to a chum who wants to use her time to study; “I spend my life in here, mopping up Sister Badger’s casualties. Better women then you have wept upon this manly bosom, I can assure you,” Jack tells Lindsay after he finds her crying in the linen closet on a particularly bad day; “I expected to pass out, and I didn’t. There was too much competition,” Lindsay says of her first day in the OR, in which the surgeon faints; “Thanks for mopping the fevered brow,” Lindsay says to a friend when she’s recovering from the chimney crash. The ending is a true, rare prize in VNRN literature, in which Dr. Findon tells Lindsay that one of her most attractive qualities for him is her dedication to nursing. He gives her a Gloria Steinem–worthy speech about her rights to be “a person in your own right,” and agrees to wait for her to finish her three years of training before they marry (though in retrospect it’s not clear why they can’t marry while she’s a student). I dropped bona fide tears at multiple points through this book, the ending most of all. This book is not to be missed; if Lindsay Wood is only a junior pro, author Olive Norton is a pro of the most senior sort, and if her many other nurse heroines are even half as perfect as Lindsay, I look forward to meeting them.

Email ThisBlogThis!Share to TwitterShare to FacebookShare to Pinterest
Labels: char, character - wolf, theme - quit working after marriage, theme - standing up for her beliefs