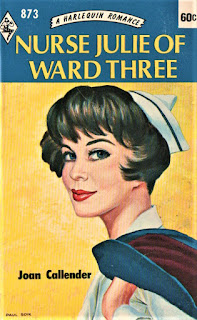 Julie Doran had been very happy in the busy, peaceful atmosphere of the geriatric ward, caring for her aged patients and on the friendliest of terms with the physician-in-charge, Hal Gardiner. But everything changed for the worse when Annette marsh came on in charge of the ward. Was it Julie’s fault—and if so, what she to do about it?

BEST QUOTES:
“If she did not marry, she would undoubtedly reach the heights of her profession.”

“For one preparing to cope with Dr. Blake, a little trouble with Mrs. Forrester seemed like child’s play. The hazards of life on Ward Three were as nothing compared with the hazards of Life.”

“Having thus made up her mind, in what she in imagined was a perfectly calm and logical manner, to throw away her career and her opportunities to be near the man she loved, she found she had nothing to do for the moment.”

“You look different. Not tired, exactly, but subdued. Has anyone been subduing you?”

“Surely he must have his doubts and fears, like everyone else? Even Matron had her moments of anxiety, which she relieved by talking to her pet cat. Perhaps Doctor Gardiner kept goldfish, or something. Perhaps he sat in an easy chair and watched them swimming round and round in a huge glass bowl. Perhaps he confided in Annette. Personally, she would have preferred the goldfish.”

“She did not expect to be successful in arguing with a man with whom she could not even discuss the weather in a natural manner.”

“You won’t go all cold and haughty again, will you? My nerves wouldn’t stand it.”

“Just in time, she remembered that today she was beautiful. Beautiful people could go anywhere.”

“It’s a pity you have to change into your uniform. That dress would make any patient feel better.”

“You see what I mean, Gill? That’s exactly how you behave when you’re in the throes of a romance. Touchy.”

“The voice of common sense has little hope of being heard above the wild, glad music of love.”

“Weeping solved no problems. It just left ugly marks on the face and a sense of shame on the mind.”

“I must be growing disillusioned in my old age. Each batch of students seems sillier than the last, these days.”

“It was a stare which would have paralyzed a lesser man.”

REVIEW:
When we first meet Julie Doran, she is three months out from graduation and is working on the geriatric ward. Unfortunately, her sweet aged patients have little regard for the niceties of protocol when the doctor is rounding and will insist on singing loudly in the bath, much to Julie’s consternation. But nice Dr. Hal Gardiner has visited the ward more than once and understands the old biddies. “They’ve lived too long to care about our little rules and regulations,” he says. “When you’ve been here for three years, you’ll have discovered what is important, and what is not, in this type of work.”

Unsurprisingly, life is about to get more complicated for Julie. Motherly head nurse Crompton of the ward is the loser in a bicycle versus car encounter and is sidelined for several months, which means nurse Annette Marsh is sent up from surgery in the interim. Annette is “a remote, glamorous figure” who “made no secret of the fact that she considered most of those with whom she came into contact as being greatly inferior to herself. She could be kind, in a lofty way, and she was certainly efficient, but her manner in general was that of a queen forced among peasants.” When Julie politely remarks that she hopes Annette will enjoy work on the ward, Annette responds, “I don’t expect to.” She does not share Dr. Gardiner’s charitable attitude toward codgers: “Old people are selfish. The care for nothing but their own comfort,” she snaps. Naturally, Julie—and indeed most of the other ward staff—does not appreciate Annette’s gifts.

Another complication is her growing esteem for Dr. Gardiner. It’s a sweet crush that grows organically: First she is over-analyzing a trivial exchange for deep hidden meaning, then briefly tries to talk herself out of it (“she was glad she had discovered this weakness in herself for gray eyes. In future she would be on her guard against it”), but that doesn’t last long. “Having failed, the night before, to be sensible about Hal Gardiner, she had found such joy in not being sensible that she was no longer attempting to reason with herself. She was going to see him again soon, and if that knowledge gave her pleasure, she was doing no wrong, she told herself, in admitting it.” The wrenches in the works are: number one, Dr. Gardiner’s relationship with Annette, as it seems the pair are not complete strangers; “there was certainly an undercurrent of tension between those two. At times, they seemed to be fighting a duel of words. Did they secretly enjoy these encounters, or were they natural antagonists?” You can sense the coming misunderstanding of the relationship a mile away. Number two is Dr. Gavin Blake, who has arrived to work alongside Dr. Gardiner for a few months and thinks Julie is a plump gazelle waiting to be chased, though he leaves her cold. “She would tell him that he was embarrassing her, and that she preferred him to leave her alone. Once she had made her feelings quite clear to him, he would surely not persist.” Oh, think again, honey.

But the obvious idea of putting Gavin together with Annette occurs to Julie: Not only would this solve two of her problems at once, but the pair are perfect for each other. “They belonged together, male and female of the same breed. Physically they complemented each other, but there was something else, something in the nature of each that was partnered by the other.” Perhaps it’s that Gavin “was sometimes strangely lacking in perception of other people’s feelings,” while for her part, Annette “seemed to be incapable of understanding the feelings of other people.” (These two descriptions occur 40 pages apart, and made for a nice echo through the text.)

The crisis comes when Julie is having a bad day on the wards—one of the more senile old ladies accuses her of poisoning the boiled potatoes—and while having a good cry, she runs into Gavin, who mops her face as good friends do, but kisses her as good friends don’t. The next day, when she tells Hal she can’t go with him to the beach because her day off has been cancelled (which is the truth), he tells her he doesn’t want to go out with her any more. She is caught completely off-guard, though we are instantly certain that he witnessed the scene with Gavin. Sad and lonely, she agrees to go on platonic drives with Gavin, until the day he decides to pull the car into a secluded lane and says, “I expected you to be a little more—adult. Let’s find out just how adult you are.” Interestingly, here is one of the few times I have seen an unsolicited kiss described appropriately: “To be in his arms was to be imprisoned, to feel his mouth on hers was to suffer an assault,” Julie thinks. So what does she do? “She remained passive, waiting for him to let her go.” And he does, suggesting, “I could still change your mind. Luckily for both of us, I’ve still got a grain of sense, so I won’t do it. Persuasion is one thing, but to take advantage of someone as inexperienced as you is another,” which to me reads as if he is suggesting he could force himself on her, though I fail to comprehend how this would “change her mind.” There are more mean words after this, and only then does she fling open the car door and climb out.

A few days later she’s clubbed on the head in the dirty utility room by the crazy patient who thinks she’s being poisoned, so you imagine that this will bridge the misunderstanding between her and Hal—and it does, in a very roundabout way. The way things get pulled together in the end is, I am very sorry to say after what had heretofore been a most delightful book, abrupt, ham-handed, way too simplistic, and wildly out of character for the individual who plays the chief role in sorting everything out. But perhaps I shouldn’t have been too surprised, as Julie does on occasion behave in ways that surprise, including shouting at a patient (after she’s severely scolded another nurse for doing the same, scant pages earlier) and hurling some pretty insulting language at Annette (when she’s been subdued for most of the book, just quietly absorbing Annette’s verbal blows up to this point). Minor foibles include the fact that some points of plot are dropped (the orderly who is apparently gossiping with the patients about Julie) as are some characters (Julie’s friends Susan and Gillian), and about half the characters are only sketchily identified though they recur throughout the book, drifting in and out like ghosts in the periphery.

But any fault this book may have is more than made up for by the fabulous writing, which is frequently subtly clever and amusing, as evidenced by the lengthy list of great quotes resting atop this review. Many more lovely turns of phrase wouldn’t translate when taken out of context, such as when Julie and two of her friends are lounging by the hospital pool (!!!), and they spot Dr. Gardiner and the head nursing matron approaching. Julie is deliberately looking away, “but after a moment or two she could tell by the way her friends began to gaze blankly into space that the two had moved nearer.” The key characters are quite sharply drawn, and you really feel you know Annette, Gavin, and Hal—and Gavin is especially enjoyable. The real tragedy of the ending is that it is such a copout, and I was disappointed in author Joan Callendar for not putting in the effort to deliver us the truly stellar book that she is clearly capable of. Sadly, this appears to be the only book Ms. Callendar has published, so I cannot hope she will redeem herself in another novel. But if this book is not perfect, it nonetheless should not be overlooked.