A Prize for Nurse Darci 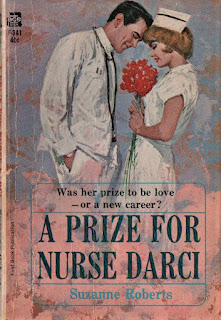 Darci Betton loved being a nurse, but at the writers’ conference she discovered a glamorous new world. It almost made her forget Dr. Mark Garrett whose last angry words were branded on her heart. When Jerome Sinclair, the famous writer and Darci’s private idol, showed more than a passing interest, Darci’s new world seemed perfect. Would a new love help her forget the old?

BEST QUOTES:
“You wouldn’t want us coming on duty without our coffee, would you doctor? We might give a heart stimulant to that patient who sneaks liquor into his room, and then you’d really have something to complain about.”

“I’m not even so sure it’s a good thing for the patients to read poetry. Maybe they ought to be resting instead of reading.”

“Being around you makes me want to go out and get myself a job in a munitions factory. I feel as if I’d like to help murder the human race, instead of trying to help it.”

“Look here, I was about to kiss you. And suddenly you’re telling me I ought to have X-rays or something! What kind of a romance is this, for Pete’s sake?”

“Darci almost wished she had fainted. It would have been so nice to be in his arms and be carried to the couch and worried about.”

REVIEW:
I will confess that I’ve had this book on my shelf for some time but have been loath to pick it up, because my experience with Suzanne Roberts has not been particularly enjoyable. Unfortunately, she’s written at least 14 nurse novels, of which I’ve endured only half (every one of them earning a C grade of some sort), and though it’s all right for you to steer clear, it’s my self-appointed job to plow through these bombs—and hopefully my pain will save you some. To that end, let this stand as a warning to avoid drippy Darci Anne Betton, who is a shallow, spineless, insipid patsy.

She is, though, a very dedicated nurse, and when the new ward resident, Dr. Mark Garrett, shows up, she’s determined to impress him. But he’s a mean, nasty tyrant who has imposed a slate of new rules for the floor—including a three-minute time limit for coffee breaks, even though it takes five minutes to get from the 10th floor ward to the cafeteria. Of course, it’s utterly unrealistic that a doctor could have the authority to insist on these things, and this one’s only a resident, not even an attending! Every nurse on the floor is putting in for transfers except Darci, who thinks, “When he doesn’t look angry—he has the nicest mouth”—the trouble being that he always looks angry.

The good news is that she’s won a story-writing contest, and the prize is free tuition at a writer’s conference, which miraculously falls on exactly the same two weeks as her upcoming vacation. The big draw for the conference is famous but fading writer Jerry Sinclair, who phones Darci at 3:00 a.m. to ask her to pick him up at the airport and have dinner with him. Instead of banging down the receiver on the inconsiderate, selfish ass, “She closed her eyes, joy going through her. ‘I’ll meet your plane, Mr. Sinclair,’ she said eagerly.”

Meeting the man, it is clear that he is a horror show—for starters, he doesn’t let her drive her own car. He’s a slimy type out to use Darci for his own purposes, and it’s certainly not hard to imagine why a writer might be pumping this naïve young woman for details about working in a hospital. Darci, curiously, sees it too—but when he takes her parking, “it might have been pure feminine instinct that made Darci sit very still, not talking, her hand as quiet as a tame bird, there in Jerry’s.” We are not surprised to find, then, that she absolutely cannot say no to the man, and instead foolishly seems to be talking herself into falling in love with him: “Am I falling in love with him? And, she wondered, if this was love. She had even mentioned the possibility that she might be in love. At the time, she had felt a little bit foolish. But now she wasn’t sorry at all she had written to her girlfriend and admitted she might be in love. Because right now, at this very moment, whatever it was she was feeling was either love or hero worship.”

Whatever it was, Jerry quickly proves himself deserving of neither, as he monopolizes her time, manipulates and guilts her into seeing him, and repeatedly insists he’s completely dependent on Darci—and he treats the conference students cruelly and unprofessionally, as well. “I was shook up because I’d phoned you and you didn’t answer my calls. That made me everything seem so—hopeless,” the stalker tells her, jealous of the time she spent writing a letter to her roommate. “Just stay with me. I need you, little girl.” Rather than run to the police department and file for a restraining order, Darci the Dope thinks, “He was probably one of the most intelligent and fascinating men in the world. Wasn’t it true that what she had was the beginning of a very hard crush on this man? And wasn’t it also true that their beloved image of Jerry had begun to fade?” Because Darci always wants to have everything both ways, even fantasizing about grumpy Dr. Garrett, who suddenly “seemed both challenging and exciting.” She has two assholes in her life, and “they were both strangely secretive and moody, and yet, Darci felt an odd tenderness and warmth towards both of them.”

As Jerry pumps her harder for details about the hospital, even Darci starts to edge away—but when the conference ends, Jerry cons her into allowing him to move to her hometown and show him around the hospital. She fears Jerry is writing an expose about the hospital, but nonetheless dutifully trots him around the hospital and introduces him to everyone. Lo and behold, Jerry eventually admits he is writing a scandalous tell-all. “Darci felt an odd sensation of fear go through her. She felt like running from Jerry in that moment and yet, he wasn’t really mean or cruel, or even cunning.” I’m not sure who she’s fooling, because we have seen him be all these things—frankly, seldom is he anything else.

Since she came home lugging Jerry Sinclair with her, Dr. Garrett has been especially frosty. But that never stops Darci—suddenly “she was in love with him. She was in love with that cold, angry man who could be so gentle with a patient but so unbending with the girl who worked side by side with him all day long.” Nurse Darci Betton is a bona fide nut case. But Mark won’t date her, so she keeps going out with her other lunatic. In his room, waiting for Jerry while he showers before another of their dates, she finds his manuscript and reads the lurid tell-all he’s written, which includes a near-miss medication error of her roommate’s, and the suggestion that at a prior job Mark’s negligence had killed a patient. Who saw that coming? Again proving herself psychotic, she wonders, “Could she still go on loving Mark if what Jerry had written was true? […] Darci tried to think more kindly of Jerry.” Really, this woman should just start dating axe murderers and be done with it.

She runs to Mark’s apartment to warn him and he tells her the story Jerry has uncovered—as an intern he had witnessed a car crash, pulled a victim from the wreckage, and the woman had died shortly afterward. This is the sort of “scandal” that frequently befalls people in nurse novels—they can’t in any way be blamed for it, but the hospital turns their actions into a terrible crime, making it a pathetic cop out. The pair end up kissing, and the next day Darci is a wreck, because “the two of them made rounds, attended patients, subbed in Emergency during noon time, and nothing at all was said. No plans were made for the future.” Apparently one kiss means it’s time to start picking out china patterns—not in the coming months, but immediately, and never mind the important work they should be concentrating on. “How can I talk to you about marrying me?” Mark rightfully asks, less than 24 hours after their first kiss—even if “it was a stop-the-world kind of kiss.”

Darci is in love with love, and getting married is her main objective—she’ll talk herself into the first ogre that comes along, and we should not be surprised, because on page three of this book we’re told “Neither girl was in love, but, of course, both of them hoped to be. Falling in love at the Center was something just about every nurse did.” Even her “plump” roommate is planning a wedding, to a patient whose sling she’d changed a couple weeks earlier. This book paints a horrific picture of the lives of young women, not to mention marriage, and I shudder to think of all the kids who’d read this fifty years ago and imagined that this was what they were supposed to be—compliant yet grasping, blind bits of putty whose main objective was to convince a man—any man, no matter how unworthy or even insane—to slip a diamond onto her hand. This book is just depressing.