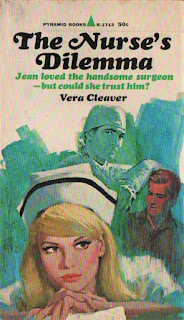 “I’d better warn you, Nurse … I’m going to marry Stephen Templeton—so forget any ideas you may have in that line. I’m not ashamed of my money—I like it and I like what it can buy.” Helen Harrison’s arrogance infuriated Nurse Jean Wheaton, but she was comforted by the memory of the handsome surgeon’s embrace. “I doubt very much if you’ll buy Dr. Templeton. Is that all you wanted to tell me?” “I just thought I’d warn you,” Helen said. “Steve is not the man to settle for … second best.” Burning with fury, Jean went to meet Dr. Stephen Templeton. Second best! Anyway, I have no intention of falling in love with him—or have I …? A beautiful young nurse, a rich society girl, and a handsome surgeon become involved in a triangle that rocks Monroe General Hospital.

“I’m going to wear my new white sweater and my new black pants, and when you see how handsome and virile I look whizzing around on my new silver skates with the wind in my hair and a song on my lips, you’ll fall to your knees and entreat me to marry you immediately.

REVIEW:
It is with great sorrow that I tell you that The Nurse’s Dilemma is the only nurse novel that Vera Cleaver ever wrote. It was her first, written when she was 47, and thereafter she turned her focus to books for young adults, mostly written in partnership with her husband Bill Cleaver; you may have heard of their third book together, Where the Lillies Bloom, which was written in 1969 and was a National Book Award finalist.

But here we have a truly remarkable story, of Nurse Jean Wheaton, who is an excellent surgical nurse. “If you’re just routinely good, you wait for the surgeon to ask for the instruments. If you’re more than good—if you’re standing there moving, breathing, feeling with him—you anticipate. You know ahead of time and you act … You are trained and, more than that, there is a built-in intuition in you, so you don’t wait for him to ask. You give. It’s a little like dancing with a stranger.” She’s the preferred scrub of Dr. Stephen Templeton, who likes everything just so, and who has carefully plotted out his life. “Dr. Templeton wants prestige in his life,” she tells her roommate Willow. “You can tell that from the way he speaks and dresses and acts. He graduated from one of the best schools in the East. He’s not going to throw all that away now.” His plans to obtain nothing but the classiest mean, Jean suspects, that she isn’t high on his list of suitable dates.

Nonetheless, he accepts Jean’s invitation to visit her raucous family in the hills for Christmas, and upon seeing him in her messy home, she realizes that she’s blown it. “When we all trooped in and took our places, and I saw Stephen Templeton look at it, I knew that the table covering should have been white cloth, that I should have somehow managed matching napkins, that the thick restaurant china my father had bought at an auction should never have been considered for such an occasion ... that it and all of us were in our element, but not in Dr. Templeton’s.” But he’s still human underneath his armor of plans, and he falls in love with Jean anyway. He’s announced his engagement to Helen Harrison, a society snob, but tells Jean he’s going to break it off with her. Unfortunately, Helen beats him to the punch and tells him that she has tuberculosis, so now we have the slightly stale situation of a couple staying together because of tragic illness. “We have to be sensible. And we have to do the honorable thing,” Stephen tells Jean, and she agrees. She packs off to a new job 600 miles away while Helen packs off to a sanitorium.

Months pass, and then there’s a knock at the door: Helen has hired a detective to find Jean, and sends a summons. She’s going to die, she tells Jean, and though Jean the trained nurse determinedly denies the truth, Helen refuses to have it, and frankly acknowledges, “My marriage to Stephen wouldn’t have been successful. It would have flopped because Stephen is in love with you.”

From here the story is fairly predictable, but what I couldn’t have predicted was how fine and how truly original the writing, how honest the emotions, how lovely the characters. The story has an actual heart. The characters are admittedly flawed, but in the end, they realize their failings and promise genuine growth, together, as a real honest love should. The medicine is detailed and mostly accurate, showing that Vera Cleaver put in a lot of time at the library for this one. This book demands a special niche on your VNRN bookshelf as a rare story that actually deserves to be read a second time, with a tear that it has no sisters, but a relieved smile that we have the remarkable gift of this one.

Email ThisBlogThis!Share to TwitterShare to FacebookShare to Pinterest
Labels: character - jealous rival, trope - staying together because of illness, tuberculosis