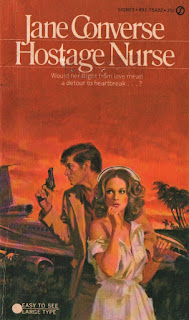 They were the ideal couple. Jenny Cole, the pretty ash-blond nurse, and Alex Walters, the boyishly handsome intern. It would be a marriage made in heaven, their friends and relatives were certain. But suddenly, a clash of temperaments, a bitter quarrel, and the inseparable twosome became mere nodding acquaintances. Jenny was determined to put Alex out of her mind, if not her heart. And she might have succeeded if a twist of fate hadn’t thrown them together in a bizarre and terrifying adventure. Facing danger, Jenny also faced the truth about herself and what she really wanted. But would it bring her a second chance at happiness?

BEST QUOTES:
“If you want to be the queen, you don’t keep sniffling, understand?”

REVIEW:
Jenny Cole and Alex Walters have been sweethearts since high school, and have plotted out their medical careers with the plan to work together “until they decided to start a family,” when Jenny would quit working and raise their brood of young ’uns. But nursing school doesn’t take as long as medical school, so by the time Alex lands a residency in the hospital where Jenny works, she has more than a year of experience under her belt to his mere months. Unfortunately, Jenny’s found that Alex thinks that his degree is worth more than her experience. “There was no doubting that Alex had changed. Several times during his six-week service in Orthopedics, Jenny had found herself working with a short-tempered, actually arrogant taskmaster, who knew less about her department and her patients than Jenny did. Why, he behaved like a smug tyrant, overly impressed with his title, making Jenny feel more like an erring servant than an experienced member of the medical team.” Which had swiftly brought about a loud argument: When she had pointed out his disrespect, he’d retorted, “You sound like one of those bra-burning women who want to be men”—proving her point. “You’ve got some idea that M.D. spells God. Let’s just forget the whole thing,” she’d snapped back, and their engagement had ended.

Now she has a vacation, coincidentally at the same time as Alex’s, and their mutual friend Toby Woodruff, a flight attendant who hasn’t seen them recently and so is unaware of their breakup, has booked them tickets on a charter flight back home to Miami. It’s a flight full of psychics on their way to a convention, and a family of three—parents and a four-year-old boy—are the only other non-conventioneers on the flight. Unfortunately, none of the psychics had picked up on the fact that the father of the family, Louis Dalby, is a paranoid schizophrenic packing a gun and a knife who hijacks the plane, shoots co-pilot Herb Gray in the shoulder, and insists that everyone call him “your majesty.” Louis wants the plane to be taken to Dalbania, a fabulous island where he is king and everyone else is his slave, located somewhere in the Bahamas. He allows the plane to touch down in Miami long enough to let off the psychics and take on fuel, then they’re off again to this chimerical destination.

Landing on a tiny, virtually uninhabited island, you’d think something interesting might happen, but no such luck. Here we find no Gilligan, no Tom Hanks and Wilson, not even Lord of the Flies—just a lot of fretting, waiting around, and stupid conversation with Louis’ equally nutty wife Iva. We also watch Jenny and Alex tend the dwindling Herb Gray while managing to keep up their pathetic squabbling even in this supposedly tense situation, to such an extent that Toby finally snaps, “You’re worse than children! I didn’t know they issued M.D.’s and R.N.’s to petulant six-year-olds.”

As the plot drags on, the pilot, Paul Farrar, and Alex manage to wrestle the gun away from Louis not once but twice, and still Louis manages to get it back every time. There’s a fruitless walk to a cabin on the other side of the island that holds only an old woman and another four-year-old kid without a radio or means of communication beyond a mail boat that isn’t due for six days, so that’s the end of that, and they walk back to the plane and King Louis. There’s also a lot of talk about removing the bullet from Herb’s shoulder, which in current medical practice is not done unless it’s endangering some internal organ or blood vessel, and then there’s the infection in Herb’s wound that’s slowly killing him, even though a bullet leaves a gun with such heat that it—and the wound it creates—are rendered sterile, so bullet wounds do not require antibiotics. Honestly, toward the end you start to wish King Louis just shoot them all, if only to put this dull book out of its misery.

Eventually, though, the bunch is magically rescued through no apparent effort of their own, though they’ve already discussed how unlikely it would be to find the wreckage, which has slid into the jungle, among the hundreds of islands in the Caribbean. I am sorry to report that their brush with death has not changed Alex any: “Come here, glorified maid,” he says to Jenny, who somehow manages to avoid throwing a fistful of sand into his face and instead falls blissfully into his arms. An equally disappointing side plot involves the romance between Paul Grey and “Stewardess” Toby, which is on the rocks because Toby does not want to have children. “I’ve got a million other things I want to do,” she explains. “Places I want to see. You know? And I’m not going to do or see anything tied up in some crummy suburban house, washing diapers or separating a couple of battling monsters.” Yet she, like Jenny, is somehow won over by this experience, or more specifically, by Louis’ son Tad—who somewhat tragically is flown off with his mother at the book’s end, without any mention whatsoever of involving the DCF—“What chance has Tad got with Iva for a parent? It breaks your heart,” Jenny says, adding that Toby “probably will never see him again. And it’s too bad. They needed each other, I think.” Never mind, now Toby is apparently ready to sign up to have her own “bawling little wet-pantsed creature” with Paul. So in the end, what we have is a dull story that offers distressing outcomes for our two heroines. Toward the end of the book, as Louis is becoming increasingly hysterical, his wife, master of the understatement, remarks, “I wish Louie wouldn’t do stuff like this. It’s kinda scary.” I have to say, I know exactly how she feels, but in my case, I’m wishing it about author Jane Converse, who shouldn’t subject us to this sort of drivel.