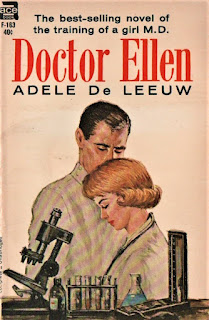 Lovely Ellen Paige met a host of violent reactions every time she reaffirmed her intention of being a doctor. “It’s—well, it’s so unfeminine,” her sister Joyce said. “It’s hard for a man; it’s even harder for a woman,” kindly Dr. Seth warned. “I want a doctor—one with pants on,” complained and injured patient. “No woman should be a doctor—and you least of all,” handsome Tim Flagg fellow student, commented. The old prejudice against woman physicians was still very much alive, but Ellen waged her battle staunchly, determined to be a doctor as well as a woman—and to be accepted as both.

REVIEW:
Doctor Ellen hits the ground with a nauseating bang when our protagonist “flung back the covers and leaped out of bed” and “sang out”—first thing in the morning, mind you!—“Morning, Mums!” It’s a wonder I managed to press on to the second sentence. The ensuing pages are admittedly less alarming, but they are stuffed with the misogynist stereotypes that Ellen is battling as she begins her third year of medical school: “Do you have to wear those awfully mannish suits all the time?” Mums asks. “It’s—well, it’s so unfeminine,” says sister Joyce, who doesn’t think Ellen will ever get married if she insists on going through with this doctor thing. “Girls don’t make good doctors!” says little brother Bill, and somehow Ellen refrains from smacking his fat head. “No woman should be a doctor,” says medical student Tim Flagg, who thinks Ellen should instead be his wife: “It’s my mission in life to persuade you you’ve made a mistake.”

There’s also the institutionalized sexism, such as the fact that “the men students had automatically been enrolled in the Army, their training supervised, their tuition paid for. But the women students had to struggle along as best they could, with prospects as lean as ever and, of course, no financial aid forthcoming.” The anatomy professor takes “special delight in baiting ‘hen medics,’ in making it hard for them and quizzing them unmercifully. He addressed himself to the men; the women were their only on sufferance, and he ignored them as much as possible.”

We watch with lifted brow while Ellen allows cave man Tim to pick her up at the train station, take her to dinner and deliver her to her rooming house, all the while cheerfully submitting to his sexist inanities. Once we get to the rooming house, however, Ellen starts to redeem herself when she meets a new boarder, Frances Tyndall, with a skeptical glance of her own. “So that’s her line, is it? Little, innocent, and helpless,” Ellen thinks snarkily to herself after the girl bats her eyelashes at the dinner table, and we like her more for it. “Being homesick and terrified and appealing all within three minutes—if this was a sample of the Tyndall mind and conversation, she saw a trying year ahead.”

And, over the ensuing pages, Ellen Paige grows on you. Like the irritating Frances, “She hadn’t been easy to live with at first, but in the painful process of growing up she had endeared herself to them.” Most of the book follows Ellen in the day-to-day of school, an externship, patients, successes and failures. She befriends a nice young wannabe surgeon Andrew McKenzie, who makes a point of stopping her after a class during which she had diagnosed a patient as having a glass eye and been subjected to the ridicule of her classmates—and little appreciation when it had turned out that she was right. “That was a brilliant piece of work,” Andrew tells her, and she answers, “There weren’t any other congratulations, though,” and our hopes begin to lift that maybe Tim won’t star in the final chapter—though he does give us quite a scare at Christmas after he wins over every single person in Ellen’s family, including Joyce’s babies and the hard-boiled cook.

Early on we sense the usual tragedy-in-the-slums trope bearing down on us when Ellen complains, “What’s that matter with cities that they can’t see the sores festering in their midst? The dirt and the slums and the rottenness? It seems like working in a circle. People studying to be doctors, men inventing medicines and cures and machines and gadgets to make life better and never getting at the root of the evil, the conditions that make sick people and criminals and poverty.” After a visit to a paralyzed child who is left alone all day in the dark while her mother works, during which a rat runs over Ellen’s shoe, Ellen gets all hot and bothered, and Andrew introduces her to a reporter, and before long there are speeches and donations and political upheaval, and a lot fewer rats in town. Ellen also works to bring Easter and Christmas celebrations to the Children’s Ward, and purpose to the life of a nurse’s aide whose husband is off fighting in the war—fairly standard stuff, it must be confessed, but presented without too much treacle.

The writing is solid and occasionally humorous, and author Adele De Leeuw, an acclaimed children’s author who wrote more than fifty books, was here in mid-career. This story is not as fluffy as it could have been; there are truly tragic characters, including one very impoverished female medical student who is forced to drop out of school to care for her siblings after her mother is incapacitated by stroke, and the paralyzed girl who inspired the rat extermination crusade. The overwhelming theme of the book seems to be learning to stand on your own, to have confidence in yourself to do the right thing. “You don’t get your strength from playing to the gallery, only from yourself,” Andrew tells her, and as the last two years of medical school pass, we watch Ellen’s confidence grow out of almost-failures, out of tragedy, out of success that isn’t just luck but earned through hard work. I would love to know what prompted De Leeuw to turn out this book, which thought it must have required a great deal of research appears to have been her only attempt at medical fiction (though she wrote three nonfiction books about nurses). But if you are going to write only one VNRN, it should be, as this is, one to be proud of.