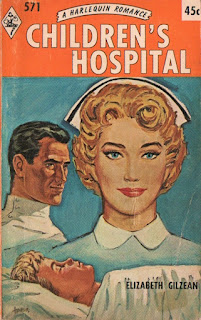 Sandra Lorraine took great pride in her children’s ward at St. Christopher’s and she resented the “new broom” methods of the new consultant, Peter Donaldson. There were many clashes between them before they came to understand each other.

BEST QUOTES:
“She got a clean cup out of the cupboard, filled it, sugared it and passed it to Matron. She seemed to be spending a lot of time resuscitating senior hospital staff.”

“It was one of those wild coincidences that only happen in real life.”

“All the ward Sisters I’ve known have been hatchet-faced women who come around with little books asking you the most intimate questions.”

REVIEW:
Sandra Lorraine is perhaps one the oldest heroines I have met in 10 years of VNRN reviews. She is a shocking 26, and has been ward chief the Westwood Ward of Saint Christopher’s Hospital for years when we meet her. She has no friends, certainly no boyfriends, and she’s estranged from her father, who is off honeymooning with a woman she can’t stand. Her entire life is going to work and her pediatric patients: “They were her world and no one could touch it.”

Then surgeon Peter Donaldson appears and shakes up her tidy little cocoon. This audacious man wants to do rounds in the afternoon instead of the morning, wants to allow parents on the ward even when it is not visiting hours, and asks her to work through her lunch hour! Furthermore, he has a grand scheme to add adult patients to the mix at Saint Christopher’s with the idea that this will improve the hospital’s chances of survival. Outrageous! He is equally disgusted with her views: “I don’t know whether you realize it, but you’re a dangerous menace to medical progress,” he tells her. And he kind of has a point. “Never in her life had she been so insulted, upset, hauled over the coals, blackmailed, provoked, stimulated, attracted, or repelled by any man.” So it is clear where all this is heading. She is a good nurse, however, and Dr. Donaldson sees potential in her that he attempts to draw out by any means necessary. “I feel that only shock tactics will jolt you out of your smug little rut and make a worthwhile human being out of you,” he tells her when he takes her out for coffee on their first date.

Interestingly, she rises to the challenge. “She did not like change ... she did not even want it. But wasn’t there something exciting about the challenge he had thrown her? The prospect of building up a new unit, the spur of grappling with different problems, of learning more so that she could help her beloved children to better advantage ... she would enjoy it, wouldn’t she?” And gradually she comes to appreciate her new boss’s techniques. There are challenges along the way, however, one of them being a new surgeon who joins the team. Gordon Rainswick is a fellow who leaves Sandra “shaking with terror,” though why that might be is never clearly spelled out to us. He’s a wolfish sort, though, so it’s not hard to guess. Peter, seeing Sandra’s overwrought response to the man, asks if she needs help, but here we have an admirable gesture from writer Elizabeth Gilzean, who has Sandra decide not to cut and run but to stand her ground. “If only she could slip a note of resignation under Matron’s door and quietly disappear, but that could be no way out for her. She could imagine the scorn, and even the disappointment, that would be on Peter Donaldson’s face if she chose the easy way out. Perhaps he was right. Perhaps she had been doing that all her life, but he had thrown the challenge at her feet. Having picked it up she could no longer deny its implications. She had to prove she was worthy to be his ward Sister, equal to the increased responsibilities he had been placing on her shoulders, mature enough to cope with the problems, not only of her professional life, but also of her private life.”

And that, unfortunately, is the high point of the book. In reality, Sandra talks a good talk, and even agrees to meet Gordon to have it out with him, but they immediately get into a car crash and she’s saved from having to actually do anything. Nor is it ever clear exactly what the problem is, though it’s insinuated that at some point in the past he’d gotten her into a compromising situation and, even if nothing happened, the trauma of the potential ruin of her reputation leaves her a quivering jelly. The fact that he’s her new stepmother’s cousin seems also to play into the unseen scandal, as does the fact that she resents her father’s new wife, but that’s never explained, either. Instead, Peter’s mother tells a story of how she was coerced into a similar situation decades ago and escaped by throwing a chair and jumping out a window. And from then on Sandra is wreathed in smiles and can finally return the love that Peter has been desperately trying to shower her with from early on in the book (though she maddeningly pretends, “He showed no signs of even approving of her most of the time.” I don’t know what’s wrong with these heroines who appear to be in a completely different book than the one we are reading.).

Compounding my disappointment in Sandra is the fact that she’s also dealing with Annette, a nurse on her ward who’s surly and insubordinate, and though she promises Peter that she is up to handle the challenge, when the nurse (for about the tenth time) lets loose with a long paragraph of invective, it’s one of the hospital doctors—who is bafflingly in love with this woman, who is just as mean to him as she is to Sandra—who swoops in to save the day. Adding to my dismay is the fact that he carries the moment by grabbing Annette’s arm tightly and dragging her forcefully out of the room. “Sandra saw that her staff nurse was gazing at John Carruthers as if he were a stranger, a stranger who had suddenly appeared fascinating. Annette’s eyes widened in startled surprise before following meekly in the wake of a man who appeared to have belatedly discovered how to handle it.”

Another problematic incident occurs when Sandra is asked to give a speech before the hospital’s board of directors about whether the hospital should admit adults. She waffles before her speech about whether she actually thinks it’s the horrible idea she believed it at book’s open, influenced no doubt by the fact that Peter is in favor of it, but he tells her to stick to her guns and give it her all. She delivers a heartfelt speech about caring for children, and the hospital board decides to keep the adults away. Then it’s suggested that Peter might have actually changed his mind for once and now agrees with Sandra, but again, it’s hard to tell if that’s the case, because the story never comes out and tells us.

Peter is an affectionate beau, and it’s not clear why he keeps after cold Sandra, who even when they are engaged cannot tell him she loves him until ten pages later, though he’s altogether soggy with affection. Those last pages become especially excruciating when rainbows and unicorns start turning up everywhere: “Sandra tried to subdue the feeling of excitement which was bubbling up inside her, threatening to overflow like a child’s bowl of soap bubbles, and her happiness was painting the bubbles with fairy colors.” And that’s just one sentence. Overall it’s not a terrible book, one that hints at good intentions, but nevertheless it is regularly disappointing, with bland, trite characters—in particular our heroine, who lives in a shell and never actually comes out of it, for all the suggestions to the contrary. If author Elizabeth Gilzean wrote with more conviction and endowed her characters with it, this would have been a much better book.