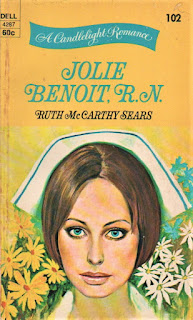 For three long years lovely Jolie Benoit had been a nurse at bustling Empire General Hospital in New York. Now she was flying home to Kansas in a private plane—at the call of handsome young Senator Brad Benedict, who had deserted Julie at the altar to pursue his political career. When Jolie arrived, she found Brad at death’s door. Romantic dreams were forgotten as she joined with Dr. Quentin Hale to fight for Brad’s life. But the gnawing questions of the heart could not be long ignored. Should Jolie spurn the attentions of the Brilliant doctor at her side? Was she helping to save a man who wanted only to use her, then break her heart again? Amid medical drama and emotional turmoil, Jolie Benoit, R.N. had to make the hardest and most fateful decision of her young life.

BEST QUOTES:
“All during the thick blackness that preceded the dawn she prayed fervently that a tracheotomy would not be necessary.”

“Even though he was in a coma, she sensed his grim determination to win whatever he undertook to win—in this case his life.”

REVIEW:
There is nothing worse than opening a new nurse novel and finding, right there on page two, that the heroine you are about to spend the next few hours with is a dope. Meet Jolie Benoit, R.N. On the first page, she’s in a limo en route to the airport at 3:00 a.m. to jump on the private plane belonging to a guy from back home in Kansas City who had dumped her at the altar three years ago and never spoken to her since, preferring instead to chase a career as a senator and “the nation’s top diplomat.” “Three years without a word—and now this! Why hadn’t she trusted Brad completely? Why hadn’t she believed in Brad, and waited?” Oh, bless your heart, honey, don’t get me started! Well, all right: Why does not have to be 3:00 a.m. instead of a more reasonable 9:00? Won’t a phone call suffice? And really, three freaking years without a word, she jumps on a plane when he sends his secretary to bang on her door in the middle of the night? All Jolie has to placate us with is, “How like him to be so flamboyant, so mysterious, so dramatic!” She forgot selfish, inconsiderate, and manipulative, but maybe I’m just not as impressed by a private jet that’s been named after me as Jolie is.

So all the way to his house she is scheming beautiful, unicorn rainbow dreams of their ecstatic reunion—and when she is shown to Brad’s room by a servant, she finds him transformed into a “deathlike figure” lying in bed. Drawing on her three years of intensive training in a New York City hospital, she promptly “cried out in a long wail of horror, ‘My God!—Oh, my God!” And faints, “or at least lost consciousness briefly.” It turns out he’s gotten tetanus from scratching his arm on a rusty nail in the stable, and Jolie has been called in because “the strictest secrecy must prevail,” explains Brad’s secretary: “Should those with whom Mr. Benedict has been negotiating—or, for that matter, our own people—discover that he is ill—I cannot estimate the dire results.” Only four people in the world are to know that he’s sick, and when Dr. Quentin Hale shows up, he is frank about his doubts about one of the party. “So! This is how you care for a patient, is it? Sniffling and daydreaming? I might have known I’d get some silly schoolgirl!” But he’s an expert on tetanus, because his wife died of it. And he’s an expert on silly nurses, because when he gives Jolie an afternoon off, first reminding her of the utmost importance of secrecy, the first thing she does on arriving at the family manse is blab to big sister Bernadette and the son of Bern’s deceased husband the whole story. Big miss for the book, though, is the fact that the pathetic pair actually keep Jolie’s secret, so Jolie’s stupidity remains unchastised.

Jolie is thrilled to see Bern again, though we the readers are not sure why, because Bern is a self-absorbed loser—apparently it runs in the family—who constantly tosses off petite French phrases and announces that she’s mortgaged the house and given the money to stepson Watt Wilkins, a short, fat guy with “liver-colored lips” who ogles Jolie and says things like, “What’s all the ruckus, Bern? Where’s my spuds you went to git?” Watt has built a meat empire in town, because why not?

Turn the page and weeks have gone by, and Brad finally gets better—wouldn’t you know, dang it, at the very second in which Jolie and Quentin Hale decide to make out, rather unprofessionally, in front of their heretofore comatose patient. But now Jolie is a-quiver in anticipation of Brad tumbling out of his hospital bed, kneeling before her and proposing. First she goes for a walk, though—and when she comes back, there’s an epidemic going on: “The place was a mess from the constant vomiting, the continuous diarrhea, and the moaning and suffering.” It turns out Watt’s sold poisoned meat all over town, and Jolie is enlisted to help the beleaguered hospital staff. Unfortunately, not even she can make a difference, and 31 people die, including Bern, who apparently vomits to death: “The awful round of nausea began again. When it was over, Bernadette was dead.”

The good news is that Watt’s off to jail, so now all lovesick Jolie has to do is wait in her house for Brad to come by and propose. Um, good luck with that, “kid,” as Brad irritatingly calls her in every sentence: “This isn’t good-bye, kid, just aloha,” he says as he jumps into the limo and jets back to Washington to save the world. What a creep. Without a whiff of irony, Jolie wonders, “Had Bern needed to give of herself in a martyrdom of duty to that thankless, greedy Watt? But Brad would come back for her, and until that day came, she would live cheerfully in this home that Bern had preserved for her at such a sacrifice.” In other words, she’s going to do exactly what she feels Bern wasted her life doing.

To fill her empty heart, she’s offered the position of superintendent of nurses, because her one week on the job has shown her to be the only suitable candidate in a hospital full of nurses. But Jolie turns out to be amazing at solving everyone else’s problems. She saves all the postoperative patients who “become depressive” and demonstrate “distemper” and “suicidal tendencies,” by suggesting they open the sunporch and “recruit some ladies to demonstrate flower arranging, weaving—that sort of thing.” Next she saves the town, which is going bankrupt, by suggesting that they have the interstate rerouted three miles so it passes through town, and build a replica of old Prairie City for the tourists, replete with “ladies of the evening” who “daintily picked their way to the elegant dining room of the hotel, where they quaffed make-believe champagne and provided an interesting atmosphere,” as well as “daring dance-hall girls, resplendent in black lace stockings, beads, and sequins.” Guess what—her whorehouse cum tourist attraction is a smashing success.

Another 18 months go by without a word from Brad the louse, or apparently either from Dr. Hale, who also has taken a job at the hospital. Brad finally arrives back to town, leaps from his ubiquitous limo at a parade, and takes her in his arms before the entire town as the band strikes up “Let Me Call You Sweetheart.” If you can believe it. He tells her, “This is it, kid! We’ll be together now—for good. Always!” Jolie about explodes in joy: “The years of waiting, of praying for this moment, had come. Brad wanted her, always and forever, for his love, his wife!” There are about two more paragraphs that run along this vein—I’ll spare you—but then a photographer steps up for a snap, and Brad says, “You’re blocking me, kid,” and gently moves her to one side. Well, 15 years of chasing this one lame guy are sunk with those four little words. “This isn’t the beginning, her heart whispered. It isn’t the beginning at all. It’s the end.” So she walks off, runs into Quentin, and the pair head off to get a hamburger, “running toward the future—together—where there is safety and warmth.”

Holy smokes, I just don’t even know where to start. I’ve given a lot of thought in the past few days to terrible nurse novels. I have only given a flat F to one other book, Conflict for Nurse Elsa, but even that book had so much zaniness to it that there were at least a few moments to pluck out and hold up for laughs. And there are those so-bad-you-gotta-read-it books, of which Arlene Fitzgerald and Zillah MacDonald are the undisputed champs, so though they are veterans of the Worst Authors list on the Annual VNRN Awards, I still look forward to picking up another of their books.

This book, unfortunately, is not of that ilk; it is just plain terrible. Its sins include the trivial, such as when we’re told that “the four giant wings of Wyandotte Memorial Hospital” were “built in the shape of a T,” which of course has only three branches. The language is startlingly formal, such as when, in the throes of passion, Brad blurts out that Jolie is “a vital presence without which I did not wish to die,” the romantic fool. The story is regularly just plain bizarre, such as when it mentions a wild squirrel one of Jolie’s siblings had tamed “until Bernadette accidentally had slammed the casement on his furry little body,” or a pony that Watt, age ten, had beaten with a stick, breaking its back so it had to be shot. The Jolie family is apparently actually French, though we’re never overtly told this, which belatedly but still unsatisfactorily explains Bern’s occasional pretentious français. We off-handedly learn that Jolie’s two brothers were killed in Korea and that her sister is a cloistered nun in Wisconsin who is allowed to send only a single postcard once a year. Bizarrely, Brad was “only a freshman in high school at age twenty,” and that’s all we learn of that. These strange details are randomly tossed into the soup and just float there—or more likely, sink—adding nothing.

Then there’s the essential problem of Jolie’s obsession with Brad, which is fervent and unswerving except when he’s in the room, and then she tells him “the spontaneity is gone”—but not to worry, so is he, three paragraphs later. Almost everything that happens in this book is told to us rather than shown; I don’t believe we are given more than two dozen sentences from either one of the leading men in 157 pages. The story is just dull: There are no talking parrots, no exonerating medical charts stuffed into a hole in the sofa, no intruders who leave half-full bottles of whisky in the cupboard. I had a premonition of foreboding when I saw the cover illustration, but maybe it was actually Ruth McCarthy Sears’ name, as the woman has given us some profoundly mediocre books (see Nurse in Acapulco and Timberline Nurse). All I can say is that in the future, when I pick up another RMS book—and she seems to have written a total of 19 nurse novels, woe unto me—I will understand any omens of ill portent that tiptoe down my spine. Although Ghetto Nurse sounds promising.