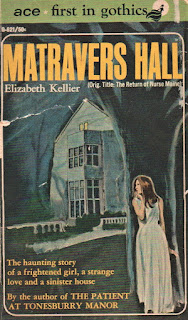 By Elizabeth Kellier, ©1962
Also published as The Return of Nurse Maine


Julia Maine was shocked to learn of the sudden death of Gaiety Harrington, her old school friend. Happily married to Nicholas Harrington, Gaiety had never seemed the suicidal type. Now, forced to pay a condolence visit to the family at Matravers Hall, Julia was plunged into an atmosphere of fear and suspicion. Apprehensive in the gloom of the great cliffside house, Julia was disturbed by the silence with which Nicholas treated his wife’s death—and by her own awakening interest in him. As the days of her visit lengthened, Julia determined to seek out the malevolent force that had destroyed the young bride—fearfully aware, that she, too, might be its victim.

BEST QUOTES:
“A person intent on murder has to take some risks.”

REVIEW:
The original title of this book is The Return of Nurse Maine, which gave me hopes that we had here an example of a sub-sub-genre, namely the nurse gothic romance novel. Heroine Julia Maine is indeed a nurse, but alas spends no time working as an actual nurse in this book, so it may not even count as even a simple nurse novel. But since I was duped into reading it, let this review serve as a warning to others who might possibly follow.

We immediately learn that Julia had once been in love with Nicholas Harrington and that he had proposed to her, but Julia’s mother was an invalid requiring her full-time attention, and she felt that “it would not be fair to hand such a burden on to any man.” So she had turned him down without revealing her motivation, and when her mother had died less than a year later, she ate her heart out. This loss was made apparently irrevocable by the fact that her school acquaintance Gaiety had swooped in as Julia was stepping out and snagged the eligible bachelor for herself, despite the fact that the pair were obviously ill-matched.

Now, when her Christmas card was answered with a note from Nicholas saying that Gaiety had tossed herself off a wind-swept cliff 18 months ago, Julia feels obliged to make a condolence visit. Curiously, her stay stretches out for weeks before she starts to consider heading home. In the interim, however, she thinks a lot about how all the people in the house might have done away with Gaiety, because exactly no one thinks Gaiety actually committed suicide. Gaiety is increasingly revealed as an unpleasant, unstable character who had moved out of her husband’s bedroom and was increasingly “nervous about something,” according to one of nearly fifty people Julia interviews regarding Gaiety’s death.

The list of suspects, however, is quite thin. Meet Nicholas’s sister Marjorie, unmarried at 38, “tall and muscular with a strong face and high forehead,” who has a close female friend “of the same type,” Miss Gladys Newson. Much is made of Marjorie’s lack of fortune and her disappointment in not being able to go with Miss Newson on that woman’s upcoming trip around the world. We also learn that Marjorie’s mother, essentially an invalid at the geriatric age of 59, has left everything to Marjorie in her will. To demonstrate her appreciation, Marjorie is always forcing her mother to stay in bed all day as well as unspecified tonics (sans gin, unfortunately) down her throat multiple times a day. The surprising detail is that nurse Julia demonstrates not one iota of interest in what the medication is or what Mrs. Harrington’s diagnosis might be.

What with interviewing Mrs. Harrington, the gardener, the cook, and the neighbors, three weeks fly by before Julia suggests she should be going, but Nicholas, who is becoming increasingly friendly, begs her to stay longer. “It was hopeless to deny that each time they went out together some further quickening of emotion took place. The hours passed like minutes.” When finally he sweeps her into his arms and covers her face with passionate kisses, she insists that he tell her his own story about what happened to Gaiety, because as a detective, this woman misses no opportunity—even if the obvious conclusion staring her down eludes her. Nicholas reveals that he had come across a letter to a lover Gaiety had written just ten weeks before her death, and his bizarre and completely unsupported conclusion is that the boyfriend had dumped her and she had killed herself in despair. Julia then interrogates neighbor Tony Grant, a suave fellow who drives a sports car and wears a scarf in the open neck of his white shirt, and the cad too easily admits that he had been seeing Gaiety, but that she had broken up with him due to Nicholas’s increasing jealousy. Julia, as stupid as she is inquisitive, turns to an obviously false suspicion: “All that her probing and her search for truth seemed to have done was to lead her round in a circle—so that she still came back to Nicholas.” It doesn’t cross her mind to wonder why Marjorie is pacing the ground atop the fatal cliff with her eyes glued to the ground, or why the manly spinster looks so afraid when it comes out that Julia has been riffling through Gaiety’s diary.

Mother Harrington has a “giddy attack,” and it turns out that she was diagnosed a year ago with leukemia, but Marjorie has decided to withhold this information from Nicholas and even Mother herself. Nicholas uses this news to suggested that he and Julia get married right away, so as to make his mother “as happy as possible.” Julia, “almost convinced” that Nicholas had nothing to do with Gaiety’s death, agrees, because why not marry a man you can’t exonerate from a murder? Mother is delighted, but when the pair tell Marjorie their happy news, “it was as if a cold wind had blown across the room.” What could it mean? Marjorie keeps harping on Mother’s upcoming sixtieth birthday, and the next day pulls Julia aside and insists that she postpone the wedding. Julia refuses, Marjorie is furious—and “something tangible seemed to be moving through the silence, something frightening and odious—like bat’s wing brushing against her cheek.” I’ll wait while you finish snickering.

When Nicholas decides to go to London on a business trip, Julia naturally decides to stay at Matravers and work on her trousseau, because the shopping opportunities in London are not that great. First, though, she’s got to take the dog for a walk, and heads for Gaiety’s jumping-off point. She finds a broken charm bracelet that had belonged to Gaiety, and suddenly she remembers Marjorie’s peculiar stroll along that same path. Finally the penny drops!! It must be Marjorie who killed Gaiety!! And now she probably wants to kill Julia!! As do most readers!!!! So when Marjorie suggests that Julia go out to the shed to collect the dog, Julia obligingly trots out, and is mysteriously locked in the shed just as she discovers it is on fire! She is rescued at the last minute, of course, and though she is convinced that she was set up by Marjorie, “it would be cruel” to tell Nicholas that his sister tried to murder her and also probably murdered his first wife.

There’s no point in laying out how it all turns out, because the reader has been fairly confident of where the trail is leading all along. The plot—and Julia—can be particularly stupid at times, as Julia leaps back and forth between defending Nicholas’s innocence one minute and being convinced of his guilt another, of today insisting Gaiety was in fact a victim of suicide but the next day it’s murder. Enormous power is invested in tiny items: Gaiety’s broken bracelet, for one, and in another instance, it is suggested that Marjorie had erased an exclamation point from Gaiety’s diary that somehow all by itself revealed everything about the murder plot, when Marjorie could have just tossed the entire diary in the fireplace. The relationship between Julia and Nicholas is wooden and completely unconvincing, barely even existing in the book. Last but not least of the book’s sins that I will mention here, I did wonder if the author intended for us to suspect that Marjorie is a lesbian. I must confess that I have not read any other Gothic novels, so I cannot say if the prose here is typical, but in Matravers Hall it is quite florid: “A flush, no deeper than the delicate pink of her house coat, slipped into the curve of Julia’s cheek,” and that’s just the second page. Mercifully, author Elizabeth Kellier soon forgets to keep up the purple standard, and drops into more normal way of talking. Not least, of course, I was peeved that I was fooled into thinking this was a nurse novel. So consider yourself warned, friends, and stay out of Matravers Hall.