There Came a Surgeon 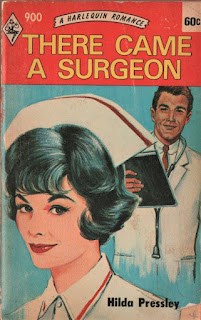 Another child’s toy, another girl’s boy, it was all the same to Elvira. Whatever Alison had, Elvira had to try and snatch it from her—even to the extent of becoming a nurse in Alison’s hospital. And Alison never realized how much she minded Elvira until Steven Hartley joined the hospital staff …

BEST QUOTES:
“Even knowing the worst is better than not knowing at all, and worrying about it.”

“When you were in love you did all manner of foolish things.”

“You women often have the same blind spots about hats that you have about men.”

“There was very little to a kiss these days. It didn’t mean anything.”

REVIEW:
This fairly simple book gives us the slow story of nurse Alison Lynwood, who at book’s outset is mad about Dr. Johnny Crowther, but “Johnny’s the type who can make you feel you’re the one girl in the world for him one minute and let you down the next,” says Alison friend’s Norah. “The trouble is with Johnny, he doesn’t want to settle down, doesn’t want to tie himself down to one woman.” On her side, Alison is in love with Johnny, and so spends a lot of time sighing by the silent phone—until Dr. Steven Hartley moves to town. Suddenly she has someone to dance with at the hospital ball while Johnny is whirling another gal around the floor. Alison gets the bright idea of dating Steven so as to make Johnny jealous, but the catch is that she really likes Steven. “How nice he is, she thought, not for the first time. He was such a restful person to be with. He was a much nicer person than Johnny. The thought brought her up with a jerk, but she realized it was true.”

Over the ensuing pages, the volume turns down on Johnny—who, miffed, calls Alison even less than usual—and up on Steven, until “she was no longer in love with Johnny. As a man he could not hold a candle to Steven.” The rub here is that Alison’s cousin Elvira turns up, chasing Johnny actually, as she’d met him at Alison’s home one time and become instantly smitten. She’s enrolled in the nursing school and starts taking up Johnny’s spare time, but when she notices that Alison’s eyes have turned to Steven, suddenly she wants that man, too. Knowing 19-year-old Elvira as we do, though, it seems hard to believe she’s going to tempt a solid type like Steven. “Elvira was so ruthless,” Alison thinks. “She could lie, cheat, scheme or even steal to get her own way. That she had good looks and a superficial charm and could to thse things without the slightest compunction made her a most formidable enemy.” But she is very transparent, tossing herself in Steven’s path or passenger seat with flirtatious lies that even a cad like Johnny could see through and tire of.

Eventually Steven kisses Alison, but with all the gossip going around the hospital—Alison is not the type to dump poor Johnny as a friend, and still has dinner with him on occasion though it’s clear to him that she has cooled—and with the usual misunderstandings and jealousies, the usual inability to just say how you feel, it takes numerous chapters to sort things out. In the interim, there’s a suicidal patient to talk in off the roof, among other adventures, but after this one, Steven tells her, “I couldn’t—wouldn’t have done it without you, Alison. I kept remembering things you had said in our conversations when we had been out together.” There are Alison’s attempts to befriend and understand Elvira, which result in that young woman climbing out on the roof, too, and Alison takes the lead there, saying, “Don’t you know that you can’t force love? The only way you can win anyone’s affection is by being loving. You could be an absolutely wonderful person, the kind of girl no one could help loving. Do you realize that?” Somehow this does the trick, and Elvira decides she really does love nursing and regrets all her bad-girl antics and wants to be Alison’s friend. Their lifelong rivalry, which has been made much of throughout the book, which has been totally unexplained—poof!—is gone. Alison is tucking Elvira into the spare bedroom in her apartment when Johnny drops by to see how Elvira is, and says he’ll take her out next week. “Do you know what I’ve discovered about Johnny? He loves women most when they’re in need of him,” Alison says slyly, though it does not ring true with us readers. Steven turns up a few minutes later to have his turn with Elvira, brushing her tears away and giving her a hug and a sleeping pill. Elvira can’t understand why everyone is so nice, but Alison lies blatantly: “We’re all being nice to you because we love you,” and not a word is said about this abrupt switch in story line, either. As Alison is seeing Steven out the door, she’s finally able, in the slightest way possible, to suggest her feelings for him when she whispers, “Steven, don’t go—” and this is all it takes to break down the misunderstandings.

I am a complete sucker for the young woman hanging out with her friends in her apartment—somehow a scene in which everyone is sitting around the living room with cocktails in their hands laughing at a joke just slays me. This book has these scenes by the handful, and its relaxed, simple tempo is soothing. Maybe the book is a smidge too simple, and the wrap-up of the conflict between Elvira and Alison is way too forced (a copy-cat would-be suicide? We love you?? Really???), but Alison is a smart, outspoken character we can admire, and on the whole this sweet book is pleasantly enjoyable.