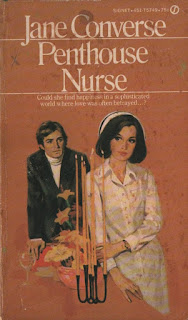 Actually, it was a dream assignment—private duty nurse to wealthy Jim Orr in his lavish penthouse. But to Carrie Linden it meant only a chance to work with Ken Delaney, Jim’s doctor—a chance to be near the man she secretly loved. Perhaps then their friendship might grow into something more. But Ken treated her as just an old friend and a capable, dedicated nurse. But Dr. Michael Carlisle saw her differently, and Carrie, feeling so lonely, found herself accepting his persistent attentions. Soon she became more and more drawn to the suave and handsome doctor, yet the image of Ken still haunted her daydreams. Was she being a romantic fool to think that Ken would ever care for her? Or should she erase him from her life—and her heart?

BEST QUOTES:
“If he had known that all nurses aren’t fat and forty, he’d have cooperated long ago, right, Jim?”

“Believe me, darling, I love you!”

REVIEW:
Nurse Carrie Linden is back in Chicago after two years at home in Bend, Oregon, caring for her terminally ill mother, who had finally succumbed to her disease. Carrie’s first stop, after that seedy hotel where she dumped her bags, is Dr. Ken Delaney’s office, where she hopes to get a glimpse of the heartthrob she left behind. “There was no reason to believe that Ken Delaney repeated her name in his daydreams like Carrie repeated his. Every day, every night—for two interminable and lonely years.” But here she is, cooling her heels in his lavishly decorated reception area, waiting for him to show up so she can beg him to marry her—no, wait, she just wants a job in his office where she can stare adoringly at him every single day. Amazingly, he remembers her with enthusiasm and takes her to dinner—and also invites his partner, Dr. Mike Carlisle, who has a cardiac patient who needs immediate specialized care. Ken warns Carrie, though, that he and the office receptionist “dig each other,” though they’re not engaged or anything, because who wants to get married? (Women do, Carrie replies, and this seems to be news to Ken.) He also tells her, “Be forewarned, naïve little country chick from Oregon. Michael Carlisle is one guy you don’t get serious about. Got that?”

Mike proves to have been accurately drawn, looking Carrie over with appreciation at their introduction, calling her “dear,” and asking her out. He also offers her the job caring for high-flying ad man Jim Orr, who has coronary artery disease, and is about three martinis and a four-hour client meeting from dropping dead of a heart attack. It’s Carrie’s job to make sure that Jim does absolutely nothing interesting, drink absolutely nothing but water, and eat absolutely nothing that tastes good. Reluctantly she signs on—maybe she’ll get to see Ken once in a while!—but it soon proves that she is unable to keep poor Jim from behaving, and frankly she’s starting to see his point that “if I do follow doctor’s orders, I’ll be miserable. In which case I may as well be dead.”

Jim’s wife, Sheila, is an over-the-top glamour puss who flings her minks any old place, quaffs Manhattans like the pro she is, and flits around shouting, “Darling!” She has also risen up through the ranks at the advertising agency and is now doing Jim’s old job, and there’s a bit of discussion about whether that’s proper: “If she was any kind of a woman she wouldn’t be doin’ it herself. One minute fussin’ over him an’ kissin’ him, then the next minute she’s rushin’ off to get herself all gussied up to go to some big, important ‘meeting,’” grumbles the housekeeper, Mrs. Groscuth. “One thing she could do is her own cookin’ and pill-givin’, like any decent woman would.” But Sheila must have some talent for the ad job or she wouldn’t have been promoted, an obvious conclusion we readers quickly reach, and Carrie valiantly points out that it takes a lot of income to support a housekeeper, nurse, penthouse, Ferrari, and yacht, as Sheila is now single-handedly doing. The problem is that Sheila is an unsympathetic, phony character, so it’s not difficult to agree that she should be doing more for her husband—and the fact that Sheila is having an affair with her boss doesn’t win her any points.

Interestingly, the book insists that forcing a capable, intelligent person to sit around the house doing nothing all day is not a good way to “save” their life. “A man’s got pride and wants to do for himself. Makes him feel like a poor cripple,” blunders the well-intentioned Mrs. Groscuth. That same principle, however, does not seem to apply to Sheila, who is belittled because she refuses to quit her job and wait on her husband.

Carrie decides on day two that she wants to quit, but Mike convinces her to stay on a little longer, and takes her out on a few dates and makes her feel wanted and attractive. He’s aware that she’s in love with Ken, and puts little pressure on her outside of roses on a daily basis and one smooch in the car before she sets him straight, after which he is admirably hands-off. Then, while he’s out of town at a “medical conference” that’s to last 17 days, Carrie agrees to let Jim work secretly work on an ad campaign, and it turns out that the only medication he needed was a yellow legal pad and a pencil, because Jim is now a chastened man: He exercises, gives up alcohol, and devours the unsalted food Mrs. Groscuth reluctantly prepares for him.

All the various personal entanglements erupt in one Who’s Afraid of Virginia Woolf? scene in which the characters are gathered in Jim’s living room for a party. Sheila’s affair is trotted out, and her boss slinks out the door and back to his family. Jim learns that the brilliant print advertising campaign he’s concocted is irrelevant because the company has decided to go with TV instead. Mike is revealed to be in Boston settling the alimony on his first wife, and his second wife—to whom he is still married—and ten-year-old child are still hoping he’ll return to them. Sheila fires Carrie for having caught Sheila and her boss going at it in his Lincoln in the garage. And Ken is pulling Carrie out the door when Jim drops of the major coronary he was doomed, from the first day we met him, to suffer in the penultimate chapter.

It mostly plays out as you expect it will, if you don’t have any hopes that Sheila, the most complex character in the book, will be able to keep both her husband and her job. The sudden engagement—and in this case, very hasty wedding—at the end of a VNRN of two characters who have perhaps not even kissed until the last chapter, much less spent months or years building an actual relationship, is a frustrating aspect of the genre, and author Jane Converse has a habit of giving heroines away to men they’ve secretly pined after for years, with the man paying little or no interest until the final three pages. It’s hard to feel happy for Carrie, because her years-long infatuation with a man 2,000 miles away, as Ken was for the two years prior to the story opening, seems pathetic at best and unhinged at worst. That her hopeless devotion is ultimately rewarded is a sick message to give the reader, and my only (admittedly very minor) consolation here is that Carrie never tries to talk herself into a relationship with Mike. It’s not the worst Jane Converse novel I’ve ever read, but if it’s not the basement, it’s not what you’d expect from the penthouse.