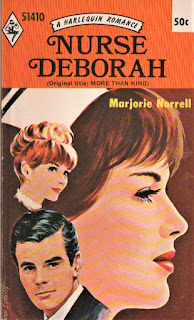 Nurse Debby Carfax had always viewed her half-cousin Margot with some wariness—Margot having always been the type of girl who couldn’t see Debby have anything without wanting to take it away from her. And now Debby had a promising new boy-friend, and Margot had announced that she was coming to Debby’s hospital to work …

BEST QUOTES:
“One doesn’t run the risk of dying of ennui in our profession, does one?”

“Being afraid is the one thing to fear.”

“To get something out of anything—life, love, work, happiness, but most of all life itself—one has to put something in before being able to take something out.”

“Never underestimate yourself, child. That’s a fatal thing to do. Remember, most people accept other people at their own valuation, so don’t set too low a price on your own head.”

REVIEW:
It’s depressing to close a book of 188 pages and realize that in all that time, pretty much nothing happened between the last sentence and the first. At the same time, Nurse Deborah starts out in a rather familiar fashion—lovely Deborah Carfax, of the easy, open, and friendly manner; the great skill for nursing; and the warm and loving family, is saddled with her cousin Margot Ruthermeade, who is the exact opposite: clever and unscrupulous, “selfish in every way,” and manipulative, someone who makes a game of smashing all Debby’s friendships and is unable to form any of her own because she cares only for herself. (Although Margot clearly cares a great deal about destroying Debby’s life, this deep, lifelong hateful commitment is never explained.) This is a plotline that has been plumbed in other VNRNs (There Came a Surgeon, Hospital on Wheels), so it loses points for its unoriginality.

Debby has just been forging a friendship with shy resident Robin Peterson, but from the moment Margot shows up in town and senses the budding romance, it is mere child’s play for her to drive a wedge between the two before they’ve even become established as a real couple. So for most of the book, “Robin’s attitude indeed had changed, from one of something more than friendliness back to its original one of formal politeness.” Debby just sadly accepts the situation, saying, “We haven’t even talked enough to quarrel!” and apparently never will talk enough to set things straight.

Meanwhile, Margot chases wealthy and important doctors, somehow attracting the understanding and affection of Dr. Philip Randall, who frequently consults Debby in his stealthy pursuit of Margot, further clouding the way between Debby and Robin, who misunderstands the friendship. Debby does manage to invite Robin to the Matron’s Ball, but Robin decides to show up only when the formal dinner is about to begin, after the dance is over and Debby has spent most of the evening crying in the hallway, because having barely had any friendly words with him for the first third of the book and virtually none at all for the last two-thirds, “she loved Robin Peterson, truly loved him, with all the fire of her more than generous heart, with every fibre of her small, compact being.”

But just as the supper is starting—and Robin is dashing back out of the ball three minutes after arriving in another maddening mix-up in which he mistakes Margot for Debby kissing Dr. Randall on the dance floor—a flash fire erupts, igniting one of the senior nurses, who is conveniently saved by wallflower Debby, but apparently nothing else is touched, as the fire department is not called and the dinner proceeds with only a short delay. Debby is hauled off in a stretcher, the senior nurse is never mentioned again, and all the dancers make do with a stand-up buffet instead of a sit-down dinner. Robin and Margot both rush to Debby’s hospital bed and confess their love and sins respectively to her gauze-wrapped body. And that’s the end.

You’d think there would be more to report about the story, and more of a relationship outside of what can only be called a budding friendship before undying love and marriage proposals are declaimed—at least on one side, as Debby’s face is bandaged and she’s high on morphine, and so rendered mute. There’s not, though, so I can’t really advise you to spend the hours requisite to plowing through this dull, unsatisfying story.