The Taming of Nurse Conway 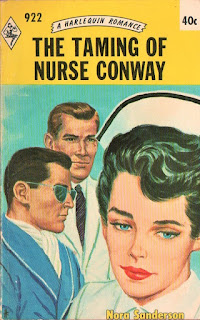 Nurse Nicky Conway already hated Dr. Peter Trenton, whom she considered responsible for her mother’s death—so that when he began to interfere with her plans for marrying Geoff Hutchinson, it was altogether too much to bear!

BEST QUOTES:
“From three till six in the morning—that’s the time a night nurse feels like sitting down and writing a last will and testament.”

“If you keep on flying into rages like this you’ll have a frightfully interesting stroke when you’re older.”

REVIEW:
Nurse Nicola Conway is easily one of the most unpleasant heroines I’ve ever met. I’m not alone in this assessment—pretty much every other character in the book chews her out at one point or another, over her irrational obsessive persecution of Dr. Peter Trenton, who was on call the night her mother, in her 40s, had a stroke and died at home with Nicky in attendance, before Dr. Trenton could arrive. It’s been more than a year since the incident, and still Nicky cannot bring herself to forgive the man and move on, or even keep a less-than-overtly-hostile expression on her face when he’s in the room. Her excuse for her hatred is that Dr. Trenton has always readily agreed that if he’d arrived sooner, Nicky’s mother would have survived—but it’s also clear that there’s some secret that exonerates the good doctor, and that the only person in New Zealand (where the book is set) who isn’t aware of this secret is Nicky herself.

Unfortunately, the pair work in the same hospital and run into each other on a daily basis—and Nicky can’t help “giving Dr. Trenton hell—you know you have, in a cruel, clever way so that he can’t hit back at you,” says her former best friend Jane, who eventually—along with all the other nurses—gives Nicky the cold shoulder for her shoddy treatment of the man, who is much beloved by the rest of the staff, the patients, and every member of the community, who all but stop him in the street and ask for his autograph. The only mystery bigger than the one surrounding Mrs. Conway’s death is why Nicky hasn’t been fired for her constant maliciousness: “If I were Dr. Trenton I’d see that you didn’t last one more day on the nursing staff,” says another ex-friend nurse. “You’re just a spoiled, self-opinionated little brat! We’d all be glad to see you go.”

So Nicky says truly horrendous things to poor Dr. Trenton on pretty much every other page, and by mid-book we readers are also wishing she’d get sacked. Even when—as you know would happen—Nicky decides, “I’ve gone and been mad enough to fall head-over-heels in love with Dr. Trenton,” which seems essentially impossible given her unswerving hatred for the man, her behavior barely budges out of the appalling zone.

A large and fairly stupid subplot involves a childhood friend of Nicky’s, Geoff Hutchinson, who has fruitlessly been hounding Nicky to marry him—and who is a victim of an accident at work that blinds him. As the weeks roll by and Geoff’s vision does not recover, Nicky idiotically decides she will marry Geoff and be his full-time nurse, for reasons that are never entirely clear. Dr. Trenton is convinced that Geoff is faking his blindness, and Nicky is equally sure he is not—giving them fodder for many more exasperating arguments—but interestingly, Geoff himself is barely seen at all in much of the book despite his starring role in the impending ruin of Nicky’s life and in all her arguments with Dr. Trenton. The question of whether Geoff is rendered a helpless baby by his blindness is viciously argued on both sides by Nicky—a hypocrisy that the book itself never acknowledges—depending on who she’s talking to: She insists that Geoff is unable to fend for himself when she’s screaming at Dr. Trenton that she must go through with the marriage, and furious that her fellow nurses are “all so determined to thrust him back into the nursery! Losing their sight doesn’t make a child of anyone!”

Equally perplexing is the huge amount of discussion about Nicky donating one of her corneas to Geoff so he would be able to see, and Dr. Trenton’s refusing to allow it—then agreeing, thinking that Geoff would never agree to Nicky’s losing an eye if he is malingering—but never in all of the talk is the surgery ever discussed with Geoff himself, which would quickly put an end to the debate and at least one source of much arguing. (The whole fake-blindness plot is not a new one, either; we’ve met it in New Surgeon at St. Lucien’s, which was also published under the Harlequin imprint though by a different author, Elizabeth Gilzean.)

Throughout this overly long book, we are subjected to a “self-righteous and critical and downright conceited,” “bad-tempered and resentful” heroine (we are told several times that Nicky is a good nurse, but we never see her do any actual nursing, and even the patients think she’s “as polite as a tiger crouching to spring”). She is frequently and rightfully called a child and told to grow up, regularly makes ridiculous decisions and stubbornly clings to them, and nastily attacks a very kind and patient doctor to the point where I think she could be prosecuted for harassment, if not creating a hostile work environment. Her assault on the doctor—and by extension the patients, nursing staff, and even us readers—drags right through to the final pages, when the foolish mystery about Mrs. Conway’s death is cleared up and we learn that if everyone had just been honest from the outset, we could have been spared 189 pages of maddening irritation. It’s impossible to believe that anyone could love Nurse Conway, and at no point is she “tamed” that I can see—rather, I pity the fool who would spend a single minute more with her than they absolutely have to. Do not, dear readers, I implore you, be such a fool—leave this book on the shelf.