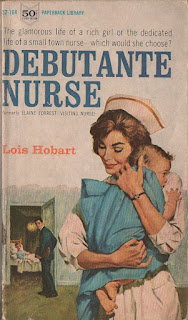 Elaine Forrest lived in two worlds. She was a Registered Nurse with an outstanding record. She was also a wealthy society girl soon to wed Bryce Thorne, a prominent lawyer. Her future was neatly planned, carefully catalogued—until Dirk Yeager shouted angrily at her, “Stop kidding yourself, Elaine. You’ve got to face the facts.” Then he turned and stalked off into the night. Elaine was left trembling and frightened. Her professional reputation challenged, her engagement broken, Elaine was passionately involved with a man who could ruin her way of life.

BEST QUOTES:
“‘You needn’t talk as if he were a robot in my hands,’ she retorted angrily. She shivered. ‘Bryce dear, would you fetch my stole from the living room?’”

REVIEW:
Nurse Elaine Forrest is fairly unique in the VNRN genre in that she is, at least in the beginning of the book, a rather horrible character. Spoiled, selfish, and inconsiderate, she’s managed nonetheless to hook physicist Bryce Thorne, because even as a young girl, “the outlines of the kind of life she wanted to shape for herself were quite clear to her, and Bryce fitted into it.”

On the train to her new job as a public health nurse, she runs into a man on the train. “He was certainly not a type that appealed to her. Too casual, with a tieless open-collared shirt and the tweed jacket slung over his shoulder. There was something too—not irresponsible exactly, not fresh, not precisely unreliable but—uncertain, unpredictable, that was it. And Elaine liked predictable: actions, situations, people that she could interpret and anticipate and deal with.” We’re already waiting to see him pop up again in a few more pages.

When she gets to the office on the first day, she finds everyone a little too relaxed and informal for her liking. She’s “appalled” that the other nurses will do things like run errands or even the dishes, if you can imagine, and on her first visit to a harried family, she “followed the woman upstairs, not supplying her name because the woman was too disorganized to care.” When it’s over, she thinks, “Hardly a very interesting first call.” But she’s OK with that; “she didn’t intend to get into the habit of carrying all her cases with her, as the others did.” Instead, she thinks about what to wear to a party she’s attending later on. So much more satisfying!

Of course, the man on the train turns out to be a new consultant, Dirk Yeager, who is writing a sociology PhD thesis on what he calls “diagnosing families,” which turns out to be a sort of psychoanalysis of relationships within a family to determine how they may be contributing to illness. “We have to understand what the family’s problems are and how each individual fits in,” he explains. Elaine, who has no interest in any of the families of her patients—or even, really, in her patients themselves, beyond their illnesses—is not wild about Dirk’s theories. She’s snippy to him, and the pair are soon arguing at every opportunity, despite the “electricity” she feels when she is forced to dance with him. But she quickly snaps out of it: “This was the real Elaine, carefully groomed, unswayed by any talk of chemistry. This was the Elaine who always knew what she was doing—not that silly, emotional, unpredictable creature of a preposterous situation. Enough nonsense about Dirk. He could not be trusted; he was probably practicing his psychology on her.” Before long, he’s practicing his psychology by taking her in his arms and telling her that he has feelings for her, but “there must be no more of that electricity,” she decides, and she gives him the brushoff.

It turns out, though, that boyfriend Bryce has been hiding a secret—he wants to chuck research and become a high school teacher. Elaine is horrified, and had “the uncomfortable feeling that she had lost control over Bryce.” She admits that “her motive was sheer selfishness; she did not welcome the status of the wife of a high school teacher. She resented the crushing of her plans.” She is openly dismissive of his ideas, but he demonstrates some spine for the first time in their relationship, takes a job teaching despite her disapproval, and then breaks their engagement. How shocking! “Elaine simply could not reconcile this firm Bryce with the one she knew, so amenable to reason, so deferent to her wishes. It was beyond belief.” He is well rid of Elaine, that much is clear.

When Dirk hears of it, he gives Elaine a complete assessment of her character, calling her “a cold fish,” and a “self-centered egotist.” He says that there’s hope for her, since she did choose nursing as a profession when she didn’t need a career at all. “I admire your ability, your intelligence, your purposefulness, but I can’t stand those blind spots—the impersonal way you deal with your patients, your impatience with the element of sympathy that makes a real woman,” he says. These disses from two different men arriving together give her a night of sleepless self-reflection, when “new humility tangled with bewilderment that the things she had been so sure of, her plans and hopes for marriage, Bryce, her very self, should be so baseless and insecure. How could this happen to her? But she was discovering new qualities in herself, new strengths as well as perplexities.”

Then there’s a flu epidemic, and after Elaine spends days vaccinating firefighters, she and her fellow nurses agree to hang out and have a beer with the guys. “It struck Elaine that once she would have ignored men like these, so different in personality and type, so remote from her previous experience of people; and in doing so would have missed the richness of range that she now valued.” She also starts to waken to her patients’ personal lives—to family diagnosis, if you will—and even makes a cup of coffee for a father who’s been up all night. “This warmth and understanding, a sensitivity to the needs of others, was it something Elaine could learn herself? Mrs. Hagstrom had it; Molly Carew had it. No wonder they were marvelous nurses. And marvelous people. Perhaps you didn’t have to conform to some idealized pattern or be socially attractive to find satisfaction in your work and an effective role in life. Maybe Elaine could accept herself for what she was and do the best with her own temperament, whatever its faults. Whatever its faults … strange to think of herself apologetically after all these years, a young lifetime of taking her good fortune and gifts for granted.”

Elaine’s growth as a human being occurs in fits and starts: In one minute she’s thinking about how cramped her old life is, the next she’s thinking of her best friend, whom Bryce is now seeing, as “a girl from a common family and background and education—how could she fit in with Bryce’s breeding, family position, and wealth? She gave her head a toss, trying to shake off this residue of snobbery and ego, but it wasn’t that easy.” This wavering makes her growth more believable, though, and I did like Elaine better in the end.

Overall, the book is well-written, despite giving us nothing pithy for the Best Quotes section. We spend a lot of time visiting patients, and the supporting characters in the book (outside of the one-dimensional male lead) are interesting. Unfortunately, her love life does not evolve as nicely as her growth as a character, Dirk (no surprise there) displaying the same presumption and bossiness that he had condemned in Elaine. I guess it’s OK to be inconsiderate and domineering if you’re a man, and if you’re a woman, you’re just hoping to find a man who will order you around: “A tiny thrill ran though her. Dirk might not leave the decision entirely in her hands.” Curious that the message of this book is that Elaine needs to be more receptive to the feelings of others, while at the same time her beaux are only admirable when they are ordering her around with no consideration of what she wants. But if you can overlook this flaw—one that is admittedly far too common in VNRNs—Debutante Nurse is a pleasant enough read.