Her Soul to Keep 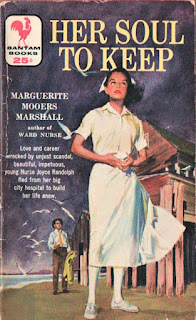 With all the fire of youth, Nurse Joyce Randolph served her great profession at St. Botolph’s, a vast New York City hospital. Fighting her lonely duels with death in the long night watches, she was sustained by her love for Dr. Warren Faulkner, brilliant young surgeon. And then one terrifying morning disaster struck. Joyce was called into her supervisor’s office. A patient had died from an overdose of morphine. The evidence pointed to Joyce. Trustingly she turned to Dr. Warren, the doctor on the case, to clear her name. But he refused to come to her defense! Bewildered, grief-stricken, believing her future in ruins, Joyce fled to a tiny fishing village to try to pick up the pieces of a shattered life.

BEST QUOTES:
“The woman who could not do her own dirty work in a boat or in the woods had better stay at home.”

“You haven’t got a thermometer so you can’t take my temperature. It might give you quite a shock if you did.”

REVIEW:
I’d been saving this, the last of the nurse novels by Marguerite Mooers Marshall, who is one of my favorite VNRN authors, and I’m shocked to find out that it’s been more than seven years since I read her third book—hard to believe I’ve been doing this blog for so long. The problem with all that anticipation is that sometimes a book does not deserve it. I have to say that this was not one of her best—but even one of her “worst” books is so much better than most other nurse novels out there that it’s hard to feel terribly disappointed.

Nurse Joyce Randolph is working at a New York City hospital on the night shift, and the sloppy day nurse, Evelyn Adams, is late again. In an attempt to help cover for her colleague, little though she deserves it, Joyce gives the morning dose of morphine but does not document it, as it would be in her handwriting (those were the days) and would therefore out Evelyn, who would have been the one to give the dose if she’d showed up on time. The patient is the daughter of the chair of the hospital board of trustees, so she’s to get VIP treatment—but what she gets is a double dose of morphine when Dr. Warren Faulkner shows up later. Though Evelyn has told him that Joyce already gave the morphine, he believes the patient when she says Joyce withheld it out of meanness, and orders Evelyn give another 10 mg morphine—and the patient promptly dies.

Joyce is immediately fired and, worse, blackballed from nursing altogether, because Evelyn is now saying that Joyce never told her about the first injection—and Dr. Faulkner refuses to defend Joyce, the rat! It turns out that Dr. Faulkner is hoping to get a plum job with a senior surgeon, and word that he had ordered the fatal dose would make him unworthy of such a post, so he has asked Evelyn to lie for him. He asks Joyce to not fight her dismissal, too, but the hitch here is that he is her boyfriend and, she hopes, her future husband. “That the brilliant young physician she admired so much should lie to cover an error in judgment—even a fatal error—was bad enough. But that he should connive with Evelyn Adams, entrust his professional honor to her keeping—oh, how could he, how could he?” She’s overlooked the part where her beloved has asked her to sacrifice her entire career for a small blot on his, but eventually she remembers that and storms off.

He’s back later, though, insisting on her silence and promising to marry her in the fall if she stands by him. But “she could not so soon forget all that had happened. Not only unjust blame, rankling humiliation, threatened banishment from the work she loved. Under everything else, the sense of betrayal by one trusted, the discovery of weakness in what she had taken for strength.” She tells him she won’t see him for two months, and trundles off during a hurricane to her roommate Sally Scott’s beach cottage, which is somewhere on Long Island, ten miles from Manhattan. It’s in a community of similar houses, all without electricity, though they do have running water, and she’s floundering around on the boardwalk in the blinding rain when she literally runs into—not the first time that’s happened!—Roger Kent, a former newspaper journalist who became disenchanted with the politics of his beat and, rather than get a new assignment, quit altogether and moved to the island to write a novel.

Most of the ensuing book is about her life on the island: Boating and fishing with Roger, lying on the beach, meeting the neighbors as they move in with the warming weather. It’s an idyllic life, and enjoyable to watch, but apart from bandaging an occasional burned finger or packing a hot appendix off to the hospital, there’s not much nursing. Eventually Roger declares his love for her, but Joyce is waiting for her feelings for Warren to reveal themselves. Interestingly, she acknowledges that mainly what she feels for him is lust: “Honestly she faced the fact that he, more than any other man, had stirred her senses. Contact as a nurse with the darker by-products of sex could not destroy its glamor and glory. One did learn, however, to apply perspective to passion.” Which she seems unable to do. When Warren does turn up, “safety—Warren’s safety—seemed to remain his first thought!” She smooches him anyway, but when he sort-of proposes—he asks her to wear his fraternity pin, how adorable!—she says she needs more time to think. He’ll be spending that time in Bar Harbor, where he has to go to care for a “sick patient,” which we of course can see right through.

It’s a classic VNRN plot that we saw coming from early on, and though Joyce is a smart, determined, sassy, intelligent, hard-working young woman, she cannot foresee how this is going to play out until the engagement announcement is printed in the Times. I do wish Joyce had figured out her feelings on her own, because it’s not really growth if everything is thrust upon you. I liked Roger, who kept telling her that “even in love one has one’s soul to keep, that when love demanded the constant sacrifice of integrity it was more than the traffic would bear.” He, unlike Warren—who has told her that her destroyed career doesn’t matter, since she’d be chucking it anyway when they got married!—has assumed she will continue nursing, because “you can’t stop being yourself just because we’re in love.” The writing has a poetic feel to it, particularly in passages describing the ocean and the beach, and numerous references to poets and writers including Emerson, Kipling, Keats, da Vinci, George Bernard Shaw, and a sprinkling of ancient Greeks and Biblical references. Marshall’s hometown of Kingston, NH, makes a cameo, here and in her other books, as Belltown, along with nearby Campton (née Hampton) Beach and Axter (Exeter)—which you may not care about, but I do, since I’m from the New Hampshire Seacoast, and I share Mooers’ pride in the beauty of her home state. I’m disappointed that this book did not live up to Marshall’s best works (Nurse into Woman and Wilderness Nurse, both A-grade books), but I’ll repeat that it’s easily worth spending an afternoon on the beach with this book.